Charles Hera was born in Germany in 1881 and became a celebrated gentleman juggler popular right after the turn of the century. While not much is known about his background or personal life, his tricks and creations were influential in the juggling world. His most famous creation was the candelabra trick, where he flipped seven candles out of a seven-pronged candelabra and caught them back in their slots. You can see Hera doing this trick in the following photos. 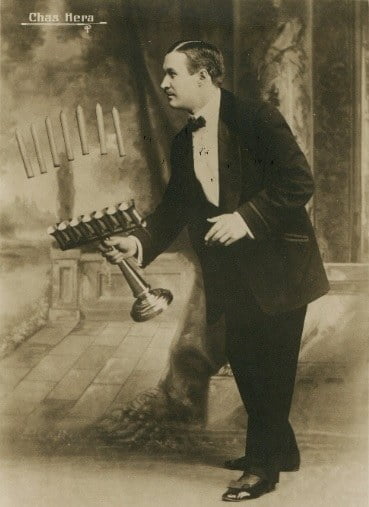 This trick would later be performed by Ferry Mader, Felix Adanos, the Mongadors, and many others.

Like other gentlemen jugglers, he specialized in juggling items that might be found in a Victorian gentleman’s home. Hera used everyday items such as his hat, umbrella, watch, handkerchief, and glasses.

Hermann Waldemar Otto wrote the following about Hera in 1910: “One of the most outstanding jugglers, besides Kara and Salerno, is the Königsberger Charles Hera, who had developed great skills at ball play as a schoolboy and started his career with a group of traveling artists. Within years the intelligent artist became a famous attraction, because he understood how to introduce new variations in his work like no other. He even learned mechanics to be able to build his own props.”

Otto continued, “His most beautiful trick is juggling 3 burning chandeliers with triple spins behind his back on a darkened stage, a trick that took 18 months to rehearse. The simultaneous throwing and catching of 9 candles in the openings of a chandelier required infinite patience.”

Otto concluded his discussion of Hera, saying, “But Hera also showed difficult tricks as an equilibrist. You wouldn’t believe that one trick, which was performed without preparation, was possible. Hera balanced the following objects on each other (from bottom to top); A billiard cue, a water decanter, two glasses, another billiard cue and a champagne glass on top.”

A similar trick that Hera showed when he first came to the United States in 1904 was balancing on his chin, from bottom to top, a cue stick, two billiard balls, another cue stick, and a tray of glasses. You can see this trick pictured below.

One of Hera’s best known tricks was done using a grandfather clock. He would balance the large clock on his forehead and then move his head in such a way as to allow the clock to slide and flip over, allowing Hera to catch the clock in a forehead balance on the opposite end of the time piece, with the clock now upside down. The back wall of the clock now faced the audience, so Hera would use a strong sideways movement of his head to turn the clock so that the spectators could see the glass side. He then repeated the end over end slide and balance move to bring the clock back to its original position.

The trick with the grandfather clock was almost attributed to another juggler of the period, the American performer Mozetto. In an interview that appeared in the October 16th, 1912 Sidney (AUS) Evening News, Mozetto gave the following account.

“Here’s an instance. You know the billiard cue trick, balancing it on the forehead, letting it slide down the nose, turn over, up end itself again on the forehead. Every juggler can do it. It’s fairly easy. Well. I got an idea to do that once with a big ornate grandfather’s clock. My father was a clockmaker, and I got a clock fixed up that was just the thing. I worked for two years at it, and had the trick just almost perfect. Then I walked into the London Pavilion one night, and saw Charles Hera doing the identical thing with a smaller clock than mine. He had just staged it. He beat me on the post. Yet neither of us knew the other was working at it. My two years’ work went for nothing.”

Another trick Charles Hera performed was to balance on his nose a tray on its side, upon which sat a jug and glass. By suddenly moving his head, he could cause the jug to tilt against the glass and pour water into it. With another movement, he was able to return the jug to its original position.

Modern jugglers often strive for some type of world record for the sake of publicity, and jugglers a hundred years ago were no different. The following was written about Charles Hera in a 1904 Keith-Albee (Vaudeville Theater Circuit) Manager’s Report Book.

“Charles Hera, 2 shows, 12 min. full stage — First time for this European juggler, whose work is of the same character as that formerly done in this country by Kara, but this man is not so clever nor finished. He has two or three tricks that are new, for one of which he claims the world’s record.”

It’s not known what that might be, but the candelabra trick would be a logical guess.

Not much is known about Hera’s career or personal life, but we do know that he passed away in 1931 at the age of 50.