He juggled like a couturier – stylish, elegant and precise

Chris Christiansen was born Christian Marin in Reims on 13 January, 1949 and grew up in
middle-class circumstances. As a 15-year-old from a family who didn’t have a television of their
own, he was watching the TV circus talent show “La Piste aux Étoiles” through a neighbour’s
living room window when Paolo Bedini entered the ring and Christian was blown away. This
juggler inspired the young Christian to such an extent that he decided there and then to
make juggling his career. From then on, he trained rigorously for several hours a day,
juggling ping-pong balls with his mouth or spinning eight hoops while balancing props on his
forehead. He would walk around the flat for hours with a ball on his head, making coffee,
brushing his teeth or receiving friends – always in search of the perfect balance. 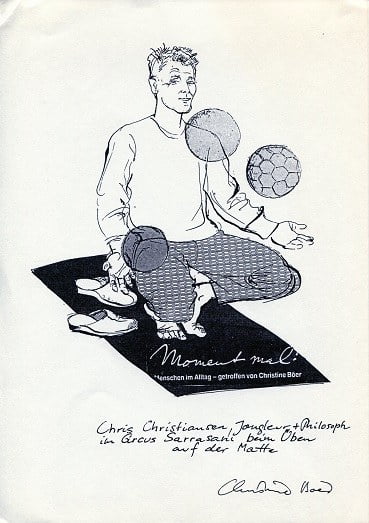 Drawing of Chris Christiansen at Circus Sarrasani (photo from the author)

For him, the heart of his art was juggling with a white ball. The newspaper “Berliner
Morgenpost” described it aptly in 1988: “Amidst the opulent vaulting and high-wire acts that
are bringing crowds to Sarrasani’s big top, there he stands alone, a solitary figure in a shaft
of light: Chris Christiansen celebrates his performance like a prayer, like a game of silence.
His philosophy: a relentless shower of rapid-fire tricks without any circus razzamatazz.”

Throughout his life, Chris was interested in literature and was particularly fond of Heinrich
von Kleist. For many years he worked on his own production of Kleist’s comedy “Der
zerbrochene Krug” (The Broken Jug) with charismatic juggling and a marionette. With this
solo show, in an era when “Nouveau Cirque” was still in its infancy, he was way ahead of his
time.

His performances at Cirque Gruss, at Sarrasani or on the stage of the Friedrichstadtpalast, at
the Tigerpalast or at Pomp Duck & Circumstance were unforgettable.

On 18 June 2021, Chris Christiansen died of pancreatic cancer. On his grave, an elaborate
statue by his friend Branlo (Cirque Aligre) commemorates the magical balancing trick in
which the white ball rolls slowly down his back from the nape of his neck while Chris moves
smoothly into a handstand. With utmost precision, the ball glides along the outstretched legs
and comes to a halt with its last breath of energy on the soles of his upturned feet – a
moment of perfection. Dear Chris, RIP.

Gentleman Juggler Jeton has appeared in countless show productions around the globe. He
has been awarded at international circus and variety festivals in Germany, France and
Hungary. At the 66th Annual IJA Juggling Festival, Jeton performed at the grand gala show
“Cascade of Stars”, where he was presented with the Award of Excellence.

You can contribute to the eZine, too! Just email us at the link in the Contact Us section at the top of the page...