The International Jugglers’ Association exists thanks to the support and generosity of members and donors. By contributing to one or more of the IJA donation funds, you’ll help ensure that the IJA continues as it has for almost 70 years: bringing the best of juggling to life and working to promote and sustain juggling and the variety arts.

If you use Amazon, an easy way to support the IJA at no extra cost to yourself is to list the International Jugglers’ Association as your charity at Amazon Smile. Then you simply browse Amazon from smile.amazon.com, and whenever you buy anything, the IJA will get a small percentage of the transaction amount. This doesn’t change the price you pay to Amazon, and the Amazon Smile website is identical to the normal Amazon site, so you can support the IJA by simply starting at smile.amazon.com. The first time you go to the site, it will ask you to select a charity you would like to support. Choose the International Jugglers’ Association from the long list of choices. Ask your friends and family to do so as well.

If you’d like to make a direct donation to the IJA, that can be done quickly and easily using our secure credit card transactions. We welcome donations of all sizes and payment plans – whether it’s a one-time gift, a monthly contribution, or part of a matching gifts program. The International Jugglers’ Association (IJA) is a 501(c)(3) non-profit organization. All donation options outlined below are tax deductible in the United States on federal income tax returns to the extent allowed by law. 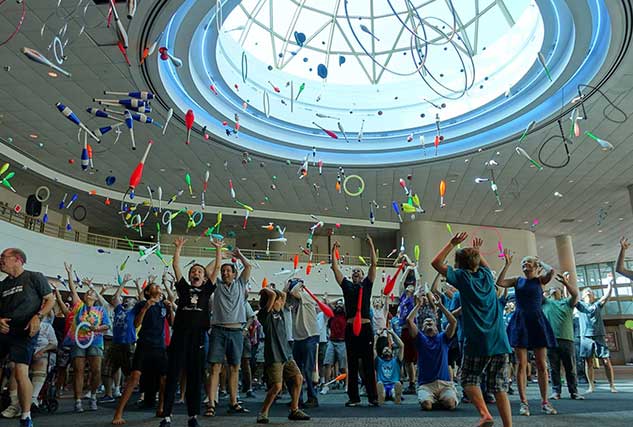 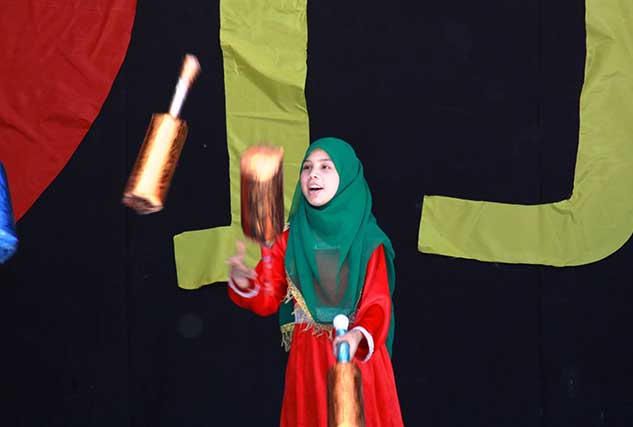 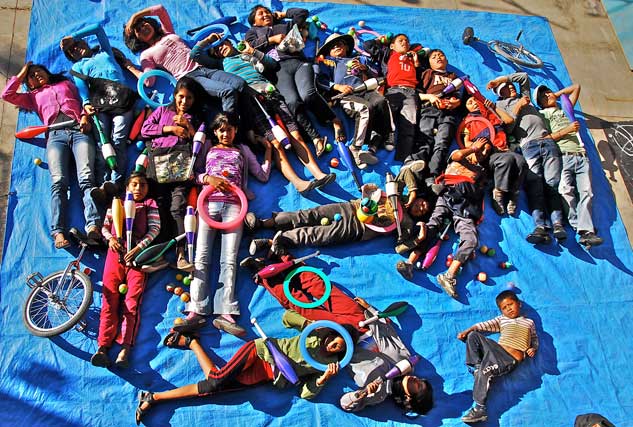 Support the International Jugglers’ Association (IJA), a 501(c)(3) non-profit organization. Your donation will help the IJA continue its global outreach programs. Donations are tax deductible in the United States on your federal income tax return to the extent allowed by law.

Props 2 U is an IJA Program that collects new and used prop donations to send to deserving youth juggling programs around the world.  Props have been sent to Kenya, Afghanistan, Bolivia, North Korea, Ethiopia, Uganda and various programs in the USA. Your donation to Props 2 U will go towards paying for shipment of these props.

Help the IJA support the Mini Mobile Circus for Children (MMCC), an Afghan-International non-profit organization that uses juggling and circus arts to help children traumatized by war to heal, build self-esteem and hope, and to express themselves. Your full donation will go to the MMCC.

Some of our specific goals for funds raised through Patreon include launching an extensive Video Tutorial Series, taught by respected jugglers from around the world. We also plan to launch “Juggler’s Scoop” – a monthly recap video highlighting recent news and events in the international juggling community. While you can enjoy some exclusive rewards for becoming a Patron, our goals revolve around the idea that we want to create more content and outlets for people everywhere to enjoy.

The J. Todd Smith Memorial Scholarship Fund is named in honor of Todd Smith, one of the world’s top manufacturers of juggling equipment. Todd was known for giving away props to aspiring jugglers and had the nickname of “the juggler’s friend”. This scholarship fund will support new jugglers who have not had the chance to attend an IJA Festival. Thanks to the generosity of Professor Arthur Lewbel and Mike and Marilyn Sullivan. More information about how to apply for IJA Festival Scholarship will be posted soon.

We celebrate the life of longtime IJA advocate and Life Member Steve Rahn. If you would like to give in his memory, this is the place to make your gift. These gifts will go towards the General Fund of the IJA.

More on the Steve Rahn Memorial Fund
You can donate to the IJA in memory of Life Member and long-time IJA advocate Steve Rahn.  Here’s what some of his friends had to say about him.  (Donors’ names and email addresses will be passed to Steve’s sister so that she can acknowledge the donations.)


Chuck Spreitzer writes: A good friend of the juggling community passed away February 25th, 2015, after suffering a stroke a few days prior. Steve Rahn was someone who made everyone feel comfortable, and truly had more friends than acquaintances. I first met Steve when I stopped by the Up for Grabs Juggling Club in Aurora, Illinois, in February of 1988. We instantly became good friends, and that July I attended my first IJA Festival in Denver, traveling & rooming with Steve and having a great time. It felt like I had known him all my life.

Steve was totally unassuming and never had an unkind word to say. There was no better proponent for juggling and the IJA. He inspired countless people to learn to juggle, and he pushed those who could do something reasonably well to make it more complex and difficult!

Steve was always behind the scenes at the IJA Festivals, but could be seen giving a workshop, tallying votes for the board elections, helping at the registration table, recording the business meetings, and of course chatting with friends about juggling and music. Steve played trumpet in a local jazz “Big Band” and also participated in a community band playing mostly trumpet, but routinely filled in on French Horn and Baritone. For years he played in the IJA band at the festival public show.

Juggling lost a great ambassador, and for the folks who were lucky enough to know Steve, we lost a wonderful friend and kind soul. He will be dearly missed.

Bob Neuman writes: Steve was such a low profile guy who never sought any recognition. A lot of fest attendees never knew all that he did. Years ago, he even went to Las Vegas with a group led by Sandy Brown, to work on the IJA archives…at his own expense!


Don Lewis writes: While I was on the IJA Board, Steve regularly sent in well reasoned suggestions and helpful feedback on developing situations. Juggling excited Steve, and he delighted in sharing his enthusiasm. He was patience personified when teaching. I’ll miss those quiet conversations that started off by “The IJA really should look into this…” Steve liked to see things done right, and was always happy to lend a hand to make the IJA better.