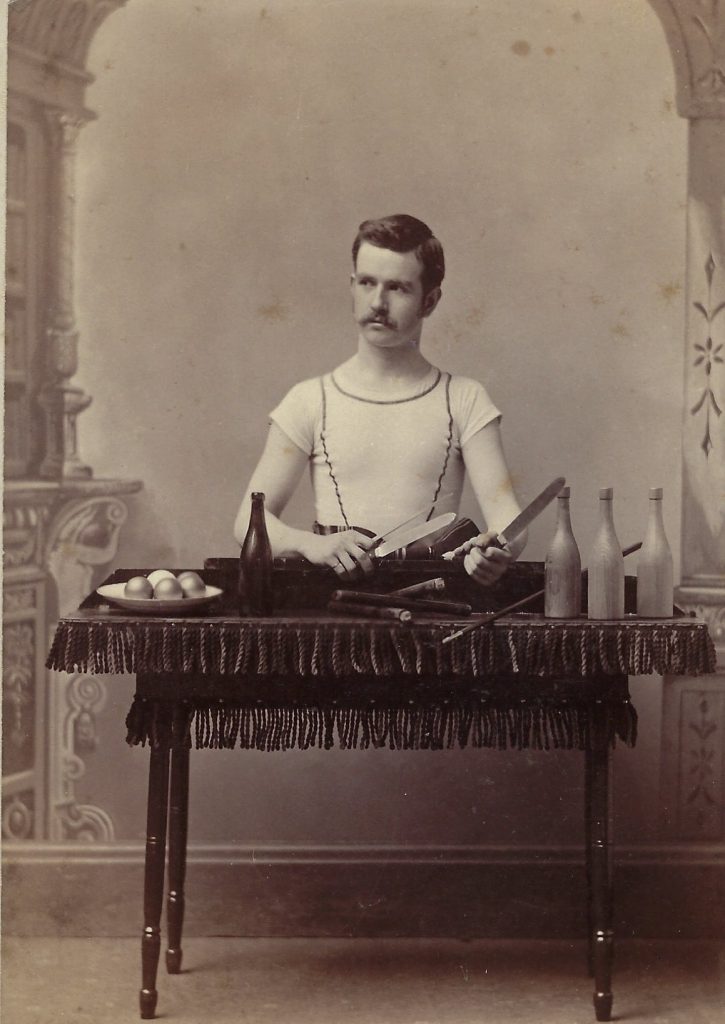 Unknown Juggler with no legs (Courtesy of Michelle Gerdes)

John P. Thomas was born in 1876 in Salt Lake City, Utah (USA). He was a self-taught juggler, as well as being a competitive boxer. In 1895, he opened an athletic school to train others in juggling and boxing. In 1898, John was offered a contract to tour with Ringling Brothers Circus as a juggler. While waiting for the contract term to begin, he worked part-time for the Royal Crystal Salt Co., a firm that extracted salt from the Great Salt Lake. On what was to be his last day of employment there, he assisted a crew that was assembling a train of salt cars. As John stepped between two cars to pull the coupling pin, the engineer did not see him and backed the train over his right leg, which had to be amputated below the knee. 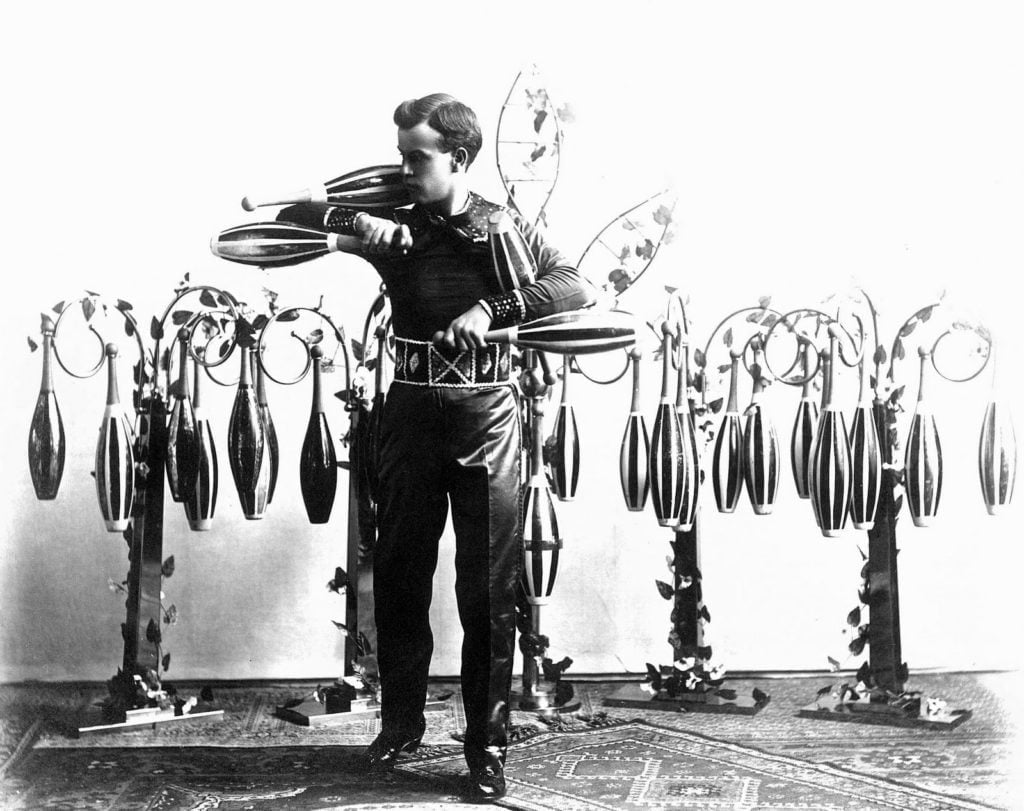 His recovery took months, by which time the circus was long gone. John learned to walk again with an artificial leg and foot. John then took a full-time job with the salt company as compensation for the loss of his limb. He worked as a packer for the next fifty years before retiring in 1948. To supplement his income, he returned to juggling and boxing and his best performances in both fields were given after he lost his leg. John also performed under the stage names of Johnny Thomas and Jack Thomas. 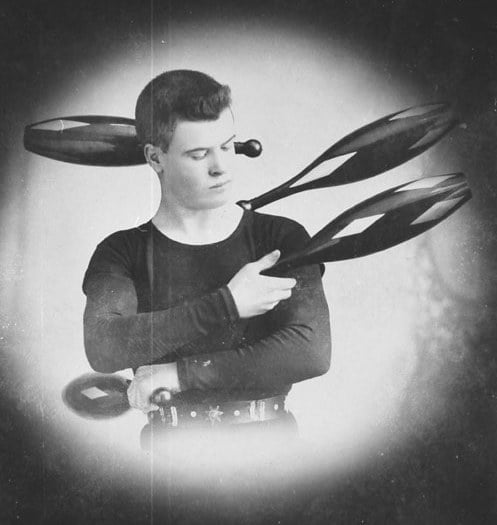 According to John’s daughter, Lenore, he was able to juggle five clubs and stop them in his hands, and could juggle seven clubs, catching five and letting two fall to the stage. His family believes John did this around 1904 and accomplished it by having his brother toss two of the clubs into the pattern. If true, this predates John Breen’s seven club juggling, which occurred around 1910. While the nature of the start and the unknown length of the juggle might not make this “official,” it is, nevertheless, quite impressive, especially if he used Van Wyck clubs to do so. John retired from performing as a juggler in 1920 and passed away in 1956. 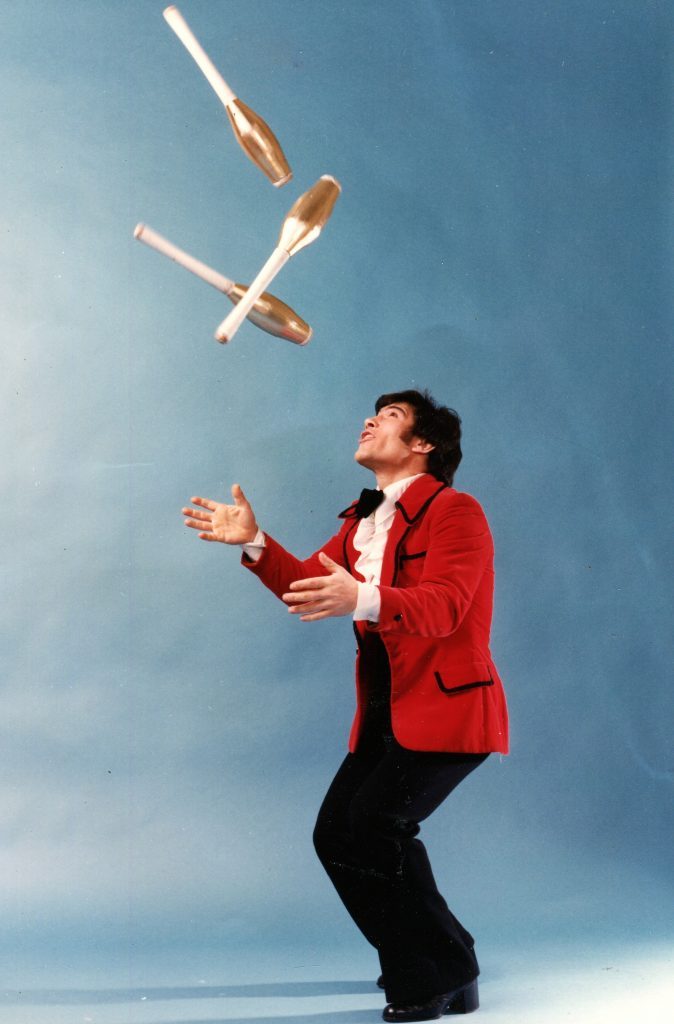 Nino Frediani was born in a dressing room of a Portuguese circus in 1940. As a member of a long-standing Italian circus family, he learned to juggle by age five and made his solo debut as a juggler at age 18. He performed ball spinning, three balls, three clubs, and three rings.  He was often billed as the fastest juggler in the world. He was best known for having audience members toss rings to him and diving all over the stage to catch them around his neck. He had an amazing career, performing in most of the world’s top venues.

All of these accomplishments are amazing by themselves, but they seem almost unbelievable when you learn a secret that Nino kept for most of his life. Nino was born with chronic dystrophy of the optic nerve, meaning that he spent his entire life legally blind! He couldn’t drive or make out the faces of friends or family, as he only had about 10% of normal vision. He covered his props with bright gold decorations so that he could see the glint off of them under the bright stage lights. For those who saw his act and later learned of his condition, it was truly a remarkable discovery. Nino retired in 2017 and passed away in 2018.

Dale Jones bills himself as a one-handed juggler. While this is not technically true, as is the case in the next juggler we’ll discuss, he does have very limited use of his right hand, which was severely injured in a fall from some monkey bars at the age of 8. He learned to juggle at the age of 15 and started performing at the age of 17. Dale is a comedy juggler and has developed a new juggling system he calls the Bounce-Multiplex which allows him to juggle up to five balls using his good hand, a knee, and a foot, or up to 6 balls using his injured hand as well. He also performs a routine bouncing three tennis balls off a tennis racket held in his right hand as well as a shaker cup-like routine with small flower pots. He also does an impressive combination trick of playing the bugle while juggling two balls and balancing a tennis racket on his foot. Now in mid-60s, Dale continues to perform at fairs across the United States. 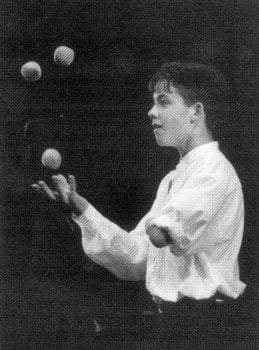 Casey Boehmer was born without a left forearm and hand, but learned to juggle two balls in his right hand at age 5. His father, an amateur juggler, put together a family act featuring Casey and his siblings, which gave Casey valuable performing experience. In the early 1990s, he started to be coached by Richard Kennison. In 1996, Casey won the IJA Juniors Championships with a display of technical juggling that included a flash of five clubs and a flash of 6 rings. Casey has performed at NBA halftime shows, Circus Sarasota, and other prestigious events.