The Lauppe Family was one of the best known juggling duos / trios for three decades. Let’s take a look at these amazing performers.

Ursula Hill (1922-1998) was a juggler from Magdeburg, Germany whose performing career began in 1940. She was not from a show business family, but received training from famed juggler Italo Medini. She performed 7 rings, 5 sticks/clubs, combination tricks, 5 rings while going into the splits, and a four stick spread (two on the right and two on the left). Ursula was a very early and important influence on Lottie Brunn, which convinced Lottie to work toward becoming a successful solo performer. Later in Ursula’s career, it was noted among her peers that she never warmed up at all before performances!

Gus Lauppe (1922-2003) was a juggler from Pforzheim, Germany. He learned to juggle in 1936 but didn’t start his performing career until 1946 due to World War II. He was drafted into the German army and fought on the Russian front lines before being assigned to Denmark until the end of the war. He only worked as a solo act for two years, but his act included some very impressive tricks, such as five big balls, up to eight rings, and ball and mouth stick work that included a trick invented by Massimiliano Truzzi – balancing one ball on a mouth stick and second one on his foot and switching the two without either touching the floor or any other part of the body.

Gus and Ursula Together

In 1948, Gus met Ursula and the two started working together. They married in 1950 and spent the next 29 years working as a team. Their resume was quite impressive. They performed for six months with Laurel and Hardy in London, October 1953 to April 1954 and then toured with the famed comedians from January 1955 to March 1956, visiting Australia, Singapore, Malaysia, Hong Kong, Manila, Cambodia, Saigon and Japan.

In February 1958 they began a tour with the Harlem Globetrotters that brought them to America for the first time. They expected to stay only a brief time, but they ended up settling in the USA from that point on.

Gus and Ursula’s son Don was born in 1952. You can see the young family in Homer Stack’s backyard in the following rare photos.

Don joined the act in 1967. Don did ball and mouthstick work, juggled up to 7 rings, did ball spinning, and juggled up to five large balls like his father. 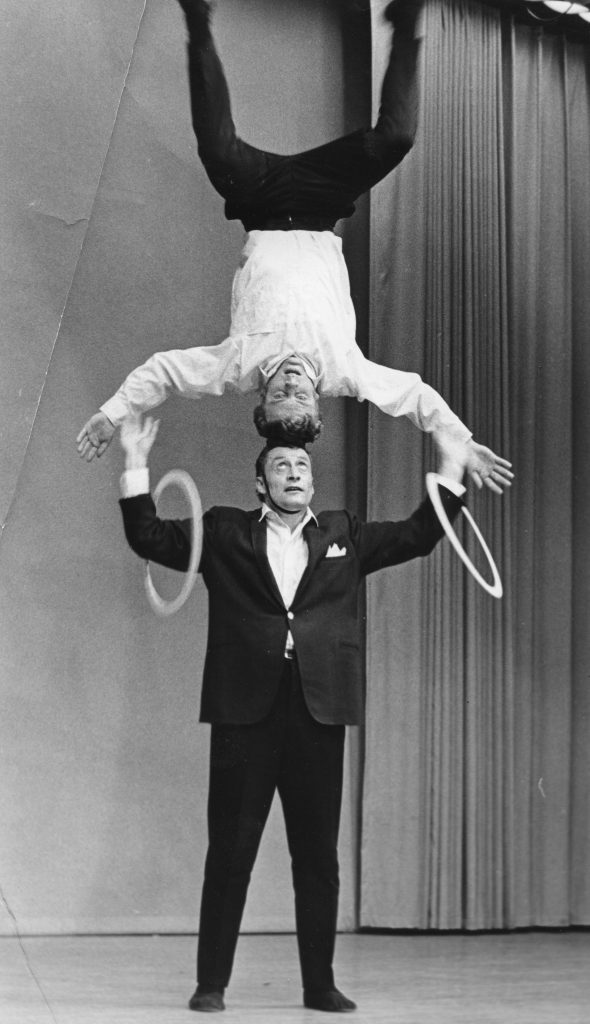 Don doing a head to head balance with Gus

As I stated earlier, Ursula was a big inspiration to famed juggler Lottie Brunn. Many years later, when Lottie and Gus and Ursula had moved to the USA and had grown sons who were also talented jugglers, the two families became friends and even performed together. Lottie’s son Michael Chirrick reports the following about the two families.

“The first time I remember meeting Gus, Ursula, and Don was around 1963, when they would be in the N.Y / New Jersey area. Don and I were about 12 or 13 years old. They would come to our place from time to time. Gus would drop Don off at our place and he would spend the night. I know my mom really liked Ursula’s work and I think was more of an inspiration to her than any other female juggler. My mom had seen “Ursula Hill” work when she was a kid and always liked her style. Ursula was also quite fast. We would run into them often throughout the 1960s and would usually get together at Claude and Jennie Crumley’s house in Chicago, which was Gus and Ursula’s base at the time.

In 1971, my mom, myself and Gus, Ursula, and Don were booked for a 10 day contract in Cincinnati with the Shrine Circus. My mom in the center ring, me on one end, and Gus and Ursula and Don on the other. My Mom came up with the idea to have Don go into my act to even out the display and at the end we all join up in the center ring to do our last trick. It worked really well and the juggling display turned out to be a highlight of the show.”

In 1976, the family bought an animal park in Maine, where the couple lived the rest of their lives. Gus and Ursula finally retired from performing in 1979. They ran the animal park until 1984. In 1994, Gus was awarded the IJA’s Historical Achievement Award. He continued to love juggling and enjoyed mentoring others, such as 1993 IJA Individual Champion Fritz Grobe.

Ursula passed away in 1998 and Gus died in 2003. Don is retired from performing and still lives in Maine.

Below are three videos of this talented family. The first is of Gus and Ursula with the Harlem Globetrotters. This is the first time this video has been online.

Next is a video filmed by Bobby Jule, made public here for the first time, courtesy of Bobby Jule.

The Museum of Juggling History has a number of props that were owned and used by Gus, Ursula, and Don. You can see them below.

Ball juggled by Don and Gus

Ursula, Gus, and Don Lauppe were juggling royalty for decades and were deserving of the great success that they found.