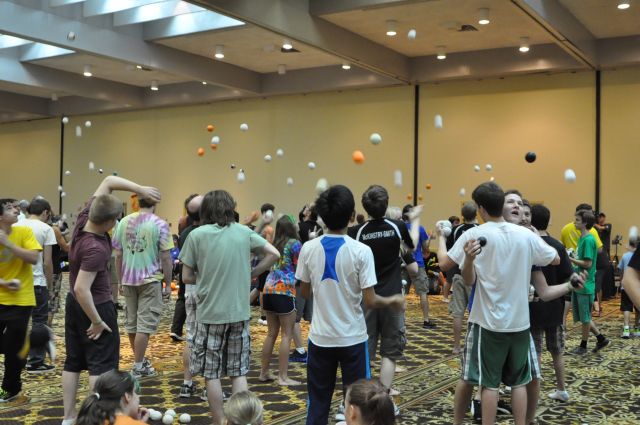 My first time at an IJA Convention was in 1985, when I spent a full three hours at the Atlanta festival on the opening day. My goal in my brief time there (my family was passing through back from a vacation in Florida) was to see my first five club juggler and first juggle of 7 balls. I did get to see five clubs (not sure who it was – maybe Ed Jackman), but only got to see 7 ball bouncing courtesy of Tim Nolan. My first full week convention was in Akron in 1987. There, I got to see a decent number of 5 club and 7 ball jugglers. Flash forward to 2015 – In preparing for my job as Numbers Championships Co-Director in advance of the Quebec City festival, I happened to glance at the Numbers results for 1987. The winning totals were 5 Clubs for 213 catches and 7 balls for 67 catches, both by Dana Tison. If those totals shock you as low by today’s standards, they did to me too, which set me on a bit of an exploration.

At nearly every recent IJA Festival, the number of objects needed to win Numbers has been 9 balls and 7 clubs, and often all of the finalists in those events accomplish qualifying runs, with the winner being the one who can achieve the most catches. At Quebec City, all 3 of the finalists in the Individual Clubs event qualified 7 clubs, and I saw at least seven people getting a qualifying run of it in the gym during the week. In 2007, we had four entrants qualify nine balls in the Preliminary Round of the Numbers Championships, so one 9 ball juggler didn’t even make the finals. Looking out on the gym floor, you can see many jugglers achieving long runs with either one at most points in the festival.

So, I really wanted to get down to some facts and verify that 5 clubs and 7 balls used to be very rare, and that it is a much more commonplace achievement nowadays. There were at least 5 jugglers at Quebec City that attended conventions back in the late 1970s. One of them, Arthur Lewbel, affirmed that times have certainly changed and that at the 1977 Convention in Newark, Delaware, there were a total of five 5 club jugglers, and no 7 ball jugglers. The others agreed that it was a very rare thing. In thinking back to my first regional convention, one in Cincinnati in 1983, there was one 5 ball juggler, and no 4 club jugglers! My current local club, which only has nine regular attendees, boasts eight 5 ball jugglers (including my 11 year old daughter Elizabeth), three 7 ball jugglers, and five 5 club jugglers.

I wanted to see if I could get more facts about a current day IJA Festival. In advance to Quebec City, I sent out an email to various juggling message boards seeking to find as many under 18 year old jugglers who could accomplish the levels of the Numbers winners from 1987. It read:

Attention: Youth attending the IJA Festival in Quebec City. Please help with a juggling experiment. We are looking for 5 club and 7 ball jugglers under the age of 18 to help with a test. If you are under 18 and can juggle either 5 clubs for at least 213 catches or 7 balls for at least 67 catches, please come demonstrate these to Scott Cain while at the IJA Fest in July. Not only are we looking for as many jugglers of this age who can reach at least these numbers, but we’re especially looking for the youngest person who can achieve each juggle (at these respective levels). Scott Cain

At the festival, In addition to seeing upwards to a hundred solid 5 club jugglers and upwards to fifty 7 ball jugglers who would be in the range of 67, I found the following youth who accomplished the feats for me: