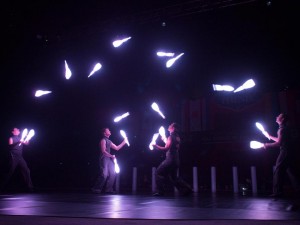 The newest addition to the performer list is TEAM JONGLISSIMO… a four person group. The brothers Christoph and Manuel Mitasch from Austria set new standards in team juggling by breaking the world record for 9 club in 2004 followed by new records with 10, 11 and 12 clubs. They have also won the IJA Team Championship in 2005 and 2007. They will now return to the US and the IJA with a four person performance. Their newest show called “Nightlight” debuted in Berlin June 9, 2012. In that show they use the latest generation of computer controlled glow equipment that is perfectly synchronized to the music. Manuel wrote the special software that manages the over 5,000 lighting changes that happen throughout the show!

Also new to the IJA line-up is Markus Furtner. Markus is arguably the best devilstick juggler in the world. Having succumbed to the fascination “Devilstick” in 1996, Markus Furtner has been learning the ins and outs of this prop by himself. Since then he has been developing new tricks and turning heads at national and international conventions as a devilstick specialist.

Thomas Dietz will be performing AND offering a special workshop! Thomas was born in Regensburg, Germany September 5, 1982. He has been juggling since he was 3 years old. At age 18 he became a professional juggler. He is considered one of the best technical jugglers and also broke a 5-Club-World Record and some unofficial records. Dietz is most popular for tricks with long runs, five balls and pirouettes. His juggling-videos contain some special tricks (DB97531), which he produced with Mark “Schani” Probst made him famous within the juggling-community. Now he’s performing all over the world, doing galas, variety-shows and giving workshops. We are proud to announce Thomas Dietz will be performing and offering a late added special workshop! 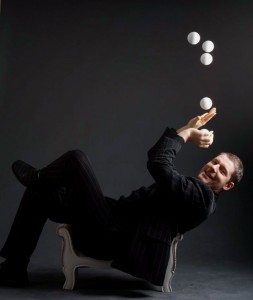 Also confirmed in the festival performances is Svetlana Zueva. She dreamed of circus and she is one of few who has made her dream come true. Svetlana was born in 1985 in Kaliningrad, Russia (USSR). At the age of 14 she bounded her life with circus. The first step in her career was when she learned juggling arts at her school circus club. She traveled a lot together with the club’s show to Poland and Lithuania.

At the age of 21 Svetlana passed exams to be accepted to the Kiev Circus Academy and spent two of her most valuable years studying juggling more deeply under the patronage of world famous coach Yuriy Pozdnyakov. Her professional career started with the first contract to become a performer on Aida cruise ship. That voyage took Zueva one year (2009-2010).
Her ambitions for a bigger stage and a greater show brought Zueva to Cirque du Soleil where she managed to sign a contract in May 2010. She spent one year traveling with the Corteo show throughout Japan, Russia, Austria, Belgium, and Spain.

In 2011 she took the second place in a Russian Juggle Competition which was the highest finish among females taking into consideration that the contest was mixed and the winner was male.
That same year she was a special guest at Berlin Juggling Covention and the EJC in Munich.
In 2013 Svetlana had 1 month training at DOCH, Stockholm with Jay Gilligan.

Championships preliminary registration is also open at this time. The best jugglers from around the world come to the IJA festival each year to present their skill and art in the IJA Stage Championships, hoping to earn the IJA Gold Medal. Always amazing and often breaking out astounding new tricks and performance styles, the Championships are a must-see for every juggler and juggling fan.

Interested in competing in this year’s championships? Be sure to read both web pages listed below for important details on entering, including the Copyright Music Policy. The IJA has moved to an all-online video submission process using youtube and juggling.tv. Deadline for receipt of the Preliminary Video is May 15, 2013 (this is a change in deadline date). The video should be a single continuous shot of your full act (actual costume, music and routine) with no editing at all. Please also make sure your props contrast against the background. There is an entry fee for all competitors of $25 per event; you can pay the Stage Championships Entry Fee in the IJA Store. Championships entrants should read: https://juggle.org/stagechamps and https://juggle.org/musicpolicy.

Performers will be able to sign up for the busking competition until midnight on July 15th, the first day of the festival. Performers will need to fill out a signup/information form.

Two or three performing spots will be available depending on the number of competitors. A random drawing will determine who performs where and when. You will have designated set-up, performance, and breakdown times. Performers will be setting up and tearing down at the same time. The time remaining for the performance will be announced over a sound system periodically.

This year’s Busking Competition will be held in downtown Bowling Green immediately following the Juggler Parade through the campus of BGSU and into the downtown of Bowling Green! If you are interested in competing in the Busker Competition, email your name, show name, performer bio, video link that showcases your talent and requirements for your show (i.e. – electrical outlet or grassy area) to Laura Ernst at busking@juggle.org.

Anyone planning on camping, please keep in mind that only 40 camping spaces are available. They are first come, first served. Another campus amenity which the IJA has access to is the lockers in the Perry Field House (our gym for the week). The locker rooms are big and beautiful and lockers are in both the men’s and women’s locker rooms so if you don’t feel like carrying your juggling equipment back and forth to your room and you don’t feel comfortable leaving your thing out overnight, bring a lock of your own with you and put your things in a locker.

Kudos to Jim Maxwell for taking the initiative to help get jugglers to the IJA this summer! He is organizing a charter bus that will pick up in several states. Jim is calling this charter Happy Fun Bus: 2013 IJA Midwest Express.

Looking for a fun and affordable way to get to the IJA festival this summer? Happy Fun Bus may be just the ticket you’re looking for. We’re hoping to charter a bus from Austin, Texas to Bowling Green State University, with planned stops peppered throughout the Midwest.

THE PLAN: Depart Austin early on Sunday, July 14. There would be at least 5 pick up points along the way in the vicinities of Dallas, TX, Tulsa, OK or Fayetteville, AR, Kansas City, MO, St. Louis, MO, Indianapolis, IN. We should arrive at BGSU in Ohio before noon on Monday, July 15. We would depart BGSU early on Sunday, July 21.

THE COST (estimate): $250 round-trip from Austin with pro-rated fares from points north. Actual cost is contingent on total number of paid passengers. Final fare schedule and itinerary to be published May 1, 2013. All fares are round-trip and must be secured with full prepayment no later than June 1, 2013.

For more information and to register interest, please contact:

Join our group on Facebook where finer details will be discussed and vetted. [www.facebook.com]

83 days (or less) to go before the start of the IJA Fest 2013! We are now under the regular pre-registration prices through June 20. After that you will have to register onsite for the IJA. I hope to see you at the IJA Fest 2013 at Bowling Green State University!