Gamal Garcia of the “Tunizianis” circus family is the featured juggler in this year’s Big Apple Circus – 40th Anniversary show. 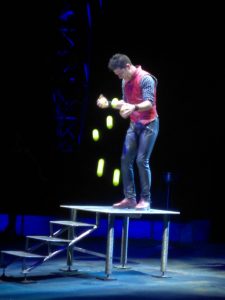 eJuggle – You are from a circus family?

GG – We, my brothers and I, are third generation circus. My mother is Janett Maltese Tunizianis. Her father was Abdula Rosario Maltese. He arrived in Italy from Tunizia. Sicily, to be exact. The name Tunizianis was added to his name and has been the family circus title ever since.

eJuggle – you are the first juggler?

GG – Yes. We were all flyers (flying trapeze artists) for all these years since my grandfather started. Today three of my brothers are in the trapeze act, one is the roller skater, and I’m the juggler. I’m the only juggler in the family. My mother also did a three person Rola bola act. Two women and one man.

eJuggle – How did you start juggling?

GG – I went with my family when I was 11 years old in 1995 to a circus festival competition in Mexico City. One of the competitors was a juggler. I was astonished by the beauty of his act and his skill.

eJuggle – Do you remember his name?

GG – He won the competition. There were many great circus acts there of all sorts. They awarded one gold medal, one silver, and one bronze. He won the gold.

eJuggle – That must have had a profound effect on you at such an impressionable age.

GG – Woah, yeah. We got to meet him. He was great to talk to. I decided I wanted to learn to juggle and I taught myself how.

eJuggle – Did you have much training?

GG – I mostly taught myself. With billiard balls. Watching jugglers on YouTube helped. The main thing was to practice a lot.

eJuggle – You live in Las Vegas?

GG – We are from Argentina. My grandfather moved to Argentina from Italy. We live in Las Vegas now and all are American citizens. I worked at Circus Circus (Hotel/casino on the Las Vegas strip) for three years.

eJuggle – You are married?

GG – My wife Marcella works in the costume department. We’ve been married 4 years. We have a 3 – year – old boy Gaell, and an 18 month old baby boy, Axel.

eJuggle – You have other interests besides juggling?

GG – I love soccer. I also love music, especially Metallica and Santana. I play drums a little. My brothers and I also create circus props and weld.

eJuggle – In your show you juggle seven balls and five clubs. You walk backward up four steps while juggling five clubs. I’ve never seen anyone do that. Is that an original trick? How many clubs can you do in practice?

GG – That is an entirely original trick. I performed it at Circus Circus. In practice I can qualify 8 balls and flash six clubs.

eJuggle – Have you been to an IJA event?

GG – No but I would like to. Hopefully soon.

eJuggle – Thanks very much. I enjoyed your performance.