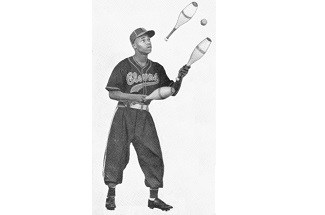 The Summer of 1987 issue of Juggler’s World magazine, which was the IJA’s 40th Anniversary issue, included an article on Joe Taylor, the first African American member of the IJA, as well as other early black jugglers. The write-up, which can be read here, chronicled some of Joe’s performances and background, but at the end of that article, it stated that the organization really didn’t know what happened to Joe after the late 1950s. Well, 28 years after that article was written, and 57 years since the last contact with Joe, I can happily report that Mr. Taylor is still alive and well, and living in Queens, NY. 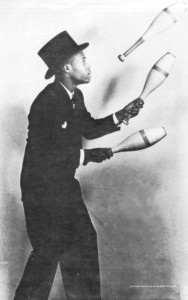 As the 1987 article reported, Joe responded to a question in a pre-IJA issue of the “Juggler’s Bulletin” from 1947 asking if anyone was aware of any black jugglers performing. One of the replies was from Joe Taylor, who informed Bulletin editor Roger Montandon that he was in fact a “colored juggler” and added his name to the membership to receive the Juggler’s Bulletin. Joe officially joined the IJA in 1947, its first year of existence, becoming the organization’s first black member, and one of the first overall.

Joe was born on April 10, 1928 and grew up in Boston, the home of vaudeville. He learned to juggle from Ed Ellis, an African American juggler who had performed on the black vaudeville circuit. Joe would later also be mentored by Francisco Alvarez, who recalled Joe as a true gentleman. Joe visited Bobby Jule backstage when Bobby was performing (as the only white act on the bill) at the Apollo Theater in Harlem, and Bobby likewise remembers Joe for being extremely kind and friendly. Joe was one of several jugglers who performed in some of the many segregated theaters and clubs which were pretty much unknown to the white jugglers of the period.

Joe Taylor’s highest profile performances were with some of the segregated sports teams of the era. The Indianapolis Clowns were one of the top teams in the Negro American League of baseball, winning the championships 4 out of 5 years at one point. In some cities, their games outdrew the Major League teams playing the same day. The Clowns were famous for having “players” who had special entertainment skills like clowning or juggling. These specialists would perform between innings, before the game, and sometimes (though rarely) be brought into the game play (similar to the Harlem Globetrotters and their antics). Juggling Joe Taylor was with the team during the 1948 and 1949 seasons, and was listed as a pitcher. However, he never played, instead performing routines with props such as baseballs, clubs, and other props. 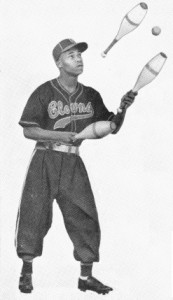 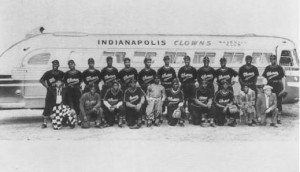 Joe was drafted into the army and trained to go to Korea in the early 1950s. However, he was luckily deployed instead to post-WWII Germany. While in Germany, he visited with juggling historian Max Koch and reported back to the Juggler’s Bulletin and the IJA.

After returning from overseas, Juggling Joe Taylor took up where he left off, performing in association with sports teams. This time, he toured for two seasons with the Harlem Magicians basketball team, a rival of the Globetrotters, performing as the halftime entertainment. The Magicians featured Marques Haynes and Goose Tatum (who had previously been on the Indy Clowns baseball team with Taylor), who had both gained fame with the Globetrotters. At one point, he also performed with the Harlem Clowns basketball team as well.

Juggling Joe Taylor’s membership with the IJA continued without break from 1947 until 1954, and he renewed again in 1958. Not long after that, Joe and the IJA lost touch with each other, and, as the 1987 article mentioned, people weren’t sure what happened to him.

Well, thanks to the internet, we can find people much easier these days. A little over a year ago, my brother David Cain obtained an old wooden ring of Joe’s for the Historical Juggling Props Exhibit and Collection. While preparing his bio for the website, he came across information that Joe was alive as of 2011. I took that information and did some additional digging. I found out that Joe is still alive, living in Queens, NY with a niece. In April 2015, I was able to meet with Joe for a Saturday brunch in Harlem, NY. I can happily report that he is a true gentleman and gentle spirit, and he and his nieces who accompanied him to brunch were extremely kind, appreciative, and generous. Joe helped fill in some of the information already relayed in this article, but I also posed a few other specific questions for him: 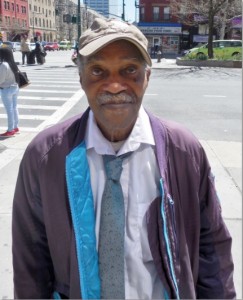 Scott Cain (SC): How did you learn to juggle?

Joe Taylor (JT): I used to play around with tossing rocks around with my friend when I was a teenager, and eventually learned how to juggle three. The Athletic Director at my local playground in Boston saw me and asked me to represent the playground in a makeshift talent show they had. I had seen Larry Weeks juggling in the film This Is The Army and copied his apple eating routine. When I did the act, the crowd loved it. I was small for my age, so maybe they thought I was younger than I was, but the crowd’s response spurred me to practice and learn more.

SC: Joe, tell us a bit about your career and performances.

JT: Eddie Ellis was a successful black juggler and coached me and other African American jugglers. During stage shows, I would juggle with balls and clubs primarily, but also did routines with wooden bicycle hoop rolling and top hat juggling. I guess if I had a specialty, it was headrolls with a ball. For a while, I did a routine with headrolls with an egg, and at the end would crack it to show it was real. I’m not sure that I ever heard of anyone else doing headrolls with an egg in performance.

SC: What was it like performing with the various sports teams?

JT: That was a lot of fun. Despite what has been written about me, I was never a player, but strictly a performer. It was fun, and steady work. It was a popular event for many, and for many in the audience, seeing a juggler like me was a rare treat. A highlight was getting to meet Jesse Owens, who said he had seen me perform a number of times and was impressed. I remember though that Jesse told me to practice more to make sure I never dropped. I think he was a perfectionist and really thought that practice and being perfect was the true mark of excellence. I worked with balls, clubs, and bats. I would do my headrolls with a baseball. My big spot was during the 7th inning stretch.

SC: What other jugglers did you get to meet? Did you ever experience any racism or trouble being an African-American in a mostly Caucasian field like jugging?

JT: I have to say that I never recall experiencing any type of racism or the like in any of my dealings with other jugglers. On the contrary, they were very kind and giving. Francisco Alvarez was extremely helpful to me. I would practice with Francisco and Lou Folds, and both would help me a lot and showed a great amount of patience with me, especially when I was just starting out. Boston had many jugglers who helped me learn and were all very friendly. I was able to stop by Roger Montandon’s home in Oklahoma while on tour with the Indianapolis Clowns and recall being warmly greeted and welcomed. The visit to Max Koch in Germany was very special also. But, of all of my contacts, the best was when I got to practice with Bobby May in Boston while he was appearing there with the Skating Vanities. I couldn’t believe the control he had with seven balls. He was so technically strong, but was also quite the showman. He was also very encouraging to me. In fact, a few weeks after practicing with him, a package arrived. In it were four clubs that had belonged to Bobby and he sent them to me for my use. The IJA and other jugglers were always very good to me.

SC: Is there anything else you’d like jugglers of today to know about you?

JT: Well, at 87 years old, I’m surprised but delighted that people are still interested in my brief, yet enjoyable juggling career. I was featured in an issue of Ebony magazine during the 1950s, and got to play a week at the Apollo Theater in Harlem before a lot of family and friends, which was nice. I understand that the current records of today are 8 clubs and 11 balls. That is hard for me to fathom. I could do five balls a bit, but tried instead to just have solid and entertaining routines with 3 and 4 objects. Eventually, I gave up juggling for a career and instead had many years as a driver for Hertz. I never married or had a family of my own, but am thankful that I have nieces that help me out in my advanced years. I’m appreciative of the IJA and all that juggling has done for me. 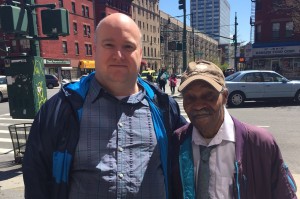