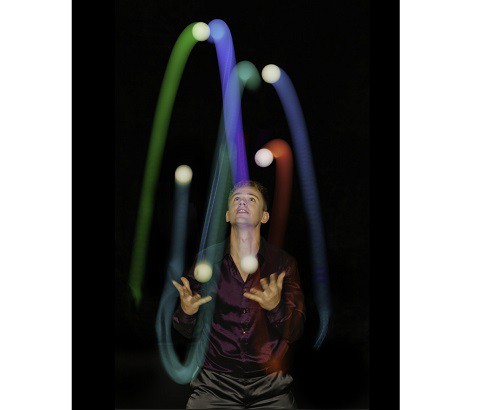 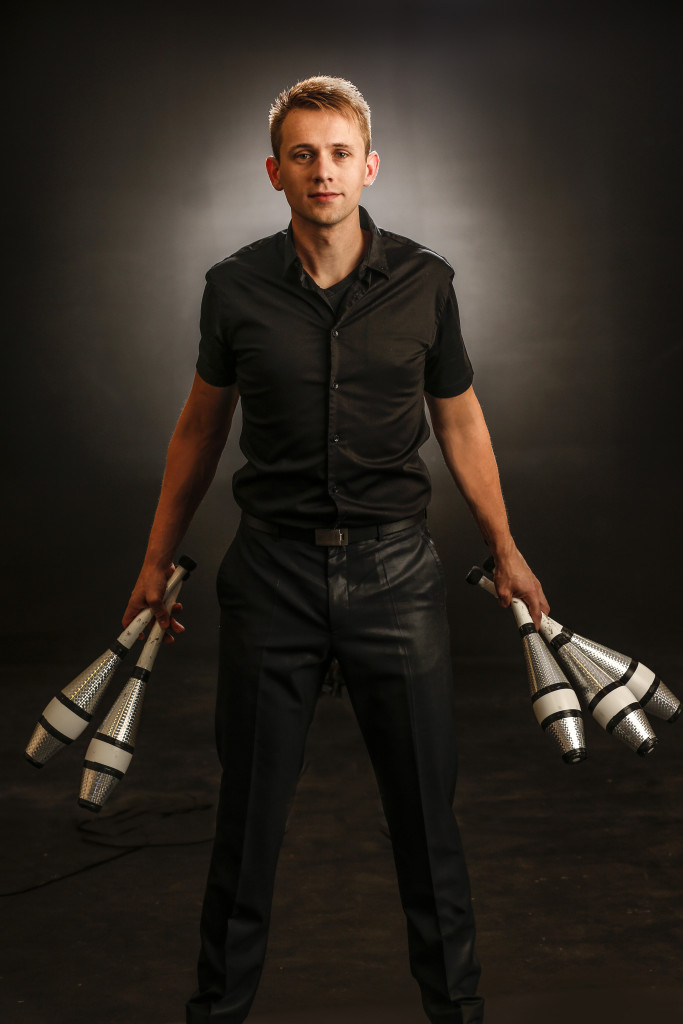 Niels Duinker is a juggler from the Netherlands with an impressive list of credentials that include performances in Las Vegas, on board cruise ships from all the major companies in the industry, being listed in the Guinness Book of World Records 3 times, and winning the circus festival of the Chinese Acrobatics Associations in Taiwan as well. Niels is also a lifetime member of the International Jugglers’ Association. In the past few years he’s been continually touring with his show all over the world. He was twice voted “Variety Act of the Year” by the International Magicians Society and appears regularly on TV shows in his home country of The Netherlands. He now lives and works in the United States (Las Vegas) for part of the year. Niels was granted a special work visa for the U.S.A. granted on extraordinary ability. In the summer of 2015, he headlined his own show, “Gravity is Overrated TM,” at the amusement park Canobie Lake Park in New England. We can expect more appearances in the United States during the upcoming years since he is now in the process of getting a green card.

How did you get started juggling?

I got my start in juggling at the age of twelve. When I was a child my father took me to the annual International Street Theater Festival in Rotterdam every year. Those experiences together with my dad and seeing a juggler on television at the circus festival “Cirque du Demain Festival” in Paris started my interest in juggling. When I was about 8 years old I tried to teach myself how to juggle and failed. I didn’t know how to do it. I could think up some tricks but after 2 days I ran out of inspiration and then it took until I was 12 years old that the father of a friend from school – who was a hobby juggler – could teach me the basics. Thereafter I didn’t stop practicing! At the age of 13 I begged my mom to let me join the youth circus in Rotterdam. In the European Juggling Magazine Kaskade I read about the new videotape from Anthony Gatto “To Be The Best.” I persuaded the youth circus to add this videotape to their library and I watched it every day between the age 14 and 17. 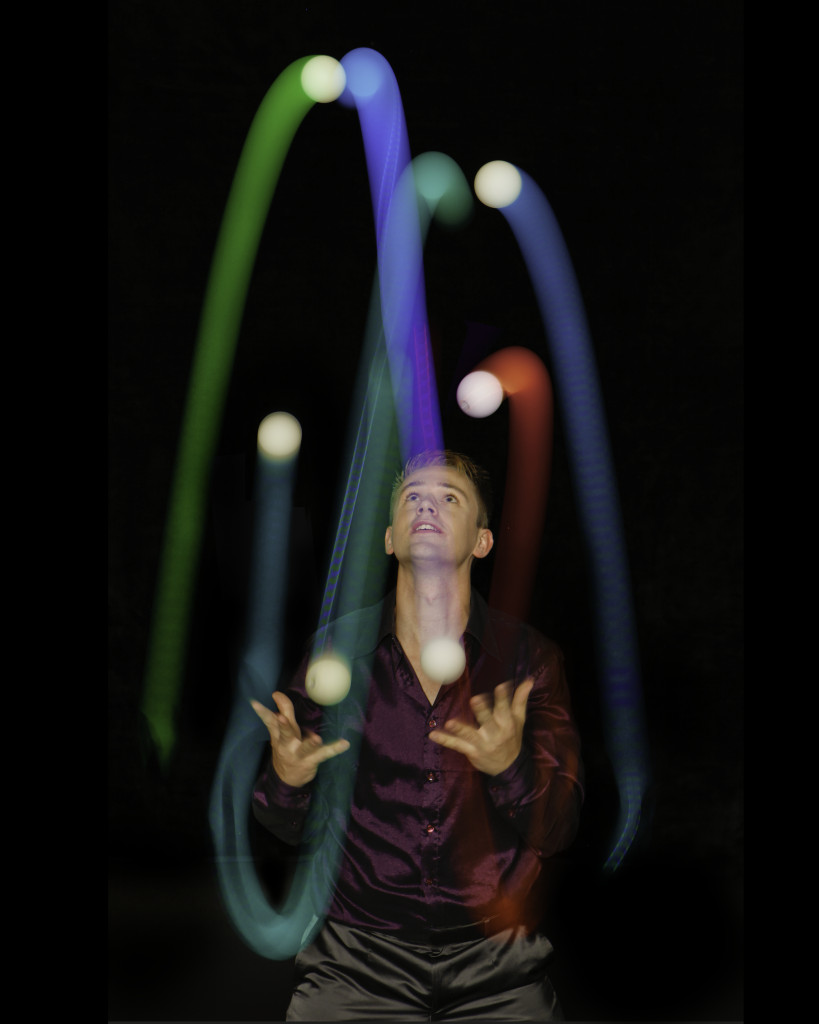 Can you tell us a bit about your professional career so far?

I have been doing shows since I was 13 years old. The very first show was a small (but paid) show at a block party in my neighborhood. I really enjoyed that. I did a show with juggling and audience interaction as I had seen the professional buskers do at the street festival in Rotterdam.  My first show was a really enjoyable experience and luckily in the audience there were two other people that had a party coming up and invited me to perform there as well. All throughout high school and college (I also have a degree in Mechanical Engineering from the Delft University of Technology) I performed juggling shows. My first international gig was a 3-month contract at a theme park in Japan. I used the video of my show there as the promo video to get into the cruise market. The week after I graduated from University I found myself on board a cruise ship from Royal Caribbean Cruise Line and performing on board cruises has been one of the venues I have been performing at the most for the past 7 years with about 30 contracts/weeks per year. 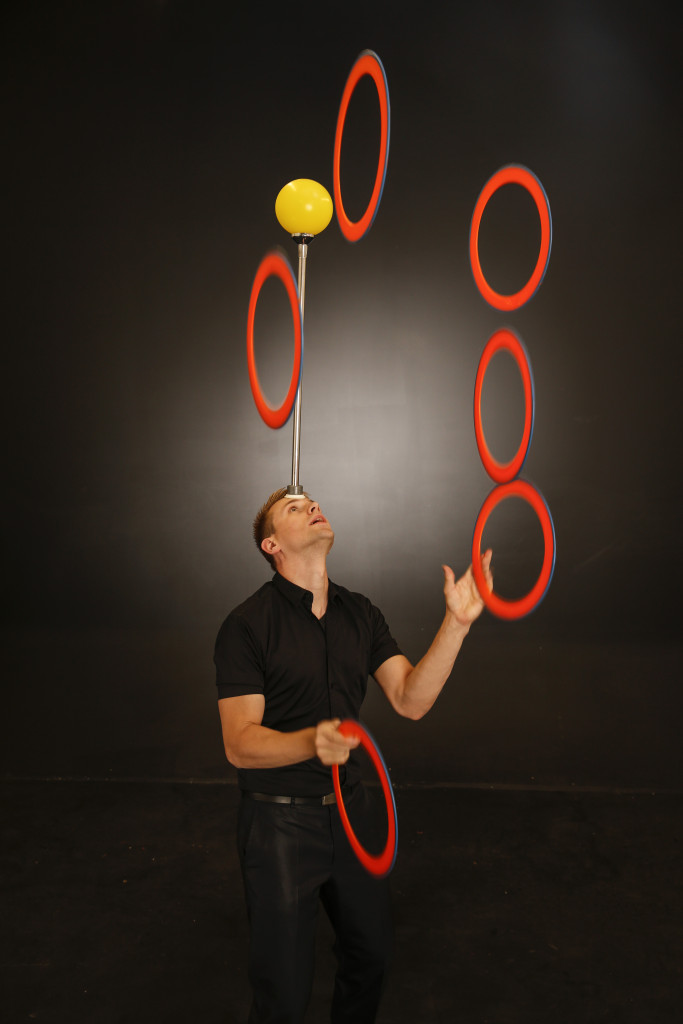 You’re constantly working on new routines for your show. Where do you get the inspiration?

My first inspiration I got from the Dutch book on juggling “Jongleren” (author Manon Sikkel and Michiel Klonhammer). In the beginning of that book there is quite a big chapter on the history of juggling. I really enjoyed reading about the odd and interesting juggling acts that have been performed in the past. I looked at those acts as advanced and creative acts done by the professionals. The other pages in the book were devoted to the technical basics of juggling. In my teenage years I pretty much grew up watching the videotape “To Be The Best” by Anthony Gatto. I watched that tape that shows Anthony Gatto in training, every day for a few years in a row and my friends at the youth circus got a bit annoyed sometimes that I could only talk about Anthony Gatto. The video display incredible technical skill, but technical skill is general is not the main thing that audiences appreciate. Between the ages 19-22 I did street shows almost every weekend and I noticed that I had to present my technical juggling skill in a way that the audience could relate to it to be entertained by it. In the past years I have built quite a bit of a collection on the history of juggling, and what’s been done in the past inspires to make my shows better and more unique in my future. I wouldn’t be able what I am doing now and putting a modern twist on the inspiration I am getting from those old books without the help from my friends and fellow jugglers Daniel Holzman, Barry Friedman and winner of the IJA’s historical achievement award Freddy Kenton. Freddy Kenton is also from the Netherlands. 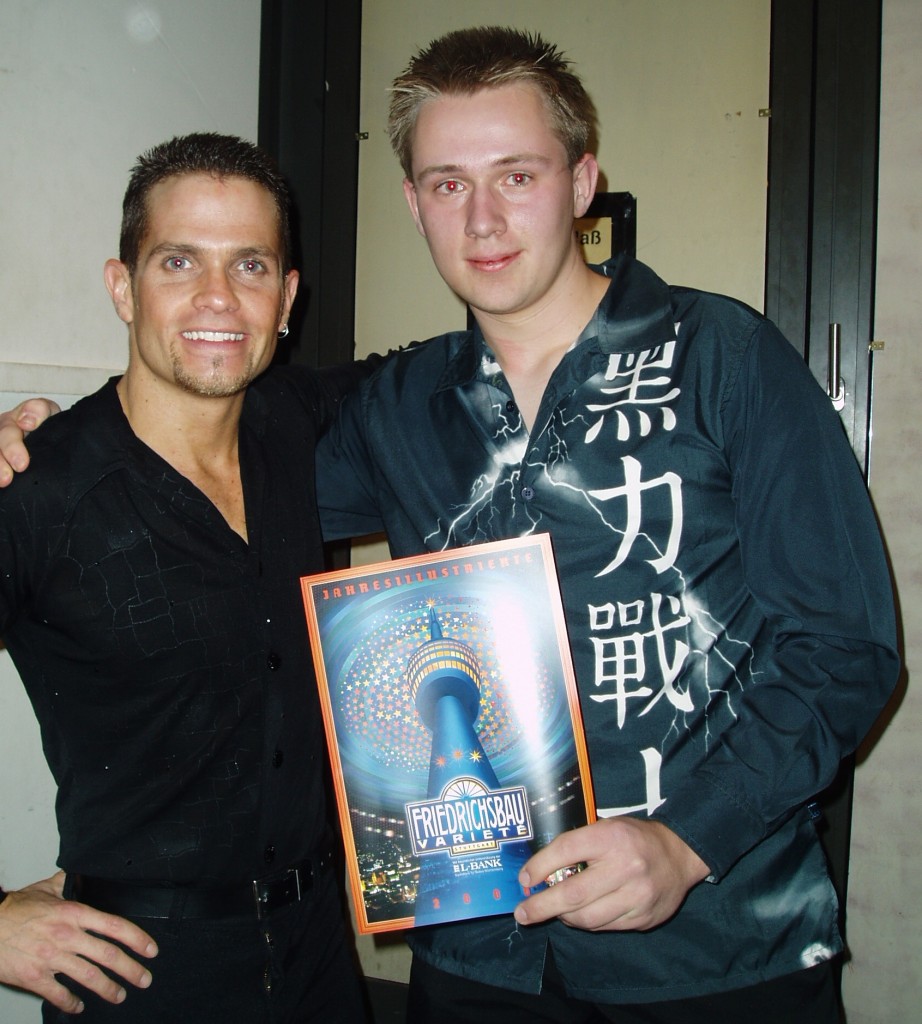 What’s an average day in your life look like?

As most performers can relate to there isn’t a typical “average” day. Depending on where I will be working that day, the structure of my days is different. When I am at home, I like to start my day with quickly catching up on office work, followed by a few hours of work on the script of my show or some prop building depending what new routine I am working on. After lunch I like to go to practice. Ideally I juggle 2 to 3 hours every day. After practice I go back and answer some emails that need to be answered.

When I am on board a cruise my schedule relies heavily on the cruise program.  On board a cruise ship training space is limited since the theater gets used for lectures and game shows as well. So first find out when the theater will be empty and I block that time to get my practice in. Depending if we’re at sea or in a port I go off the ship to explore the city a bit and while on land I catch up online on things that need my attention. When I perform in a variety theater or theme park my days are different again but still I like to keep up at my practice and stay on top of my office work. 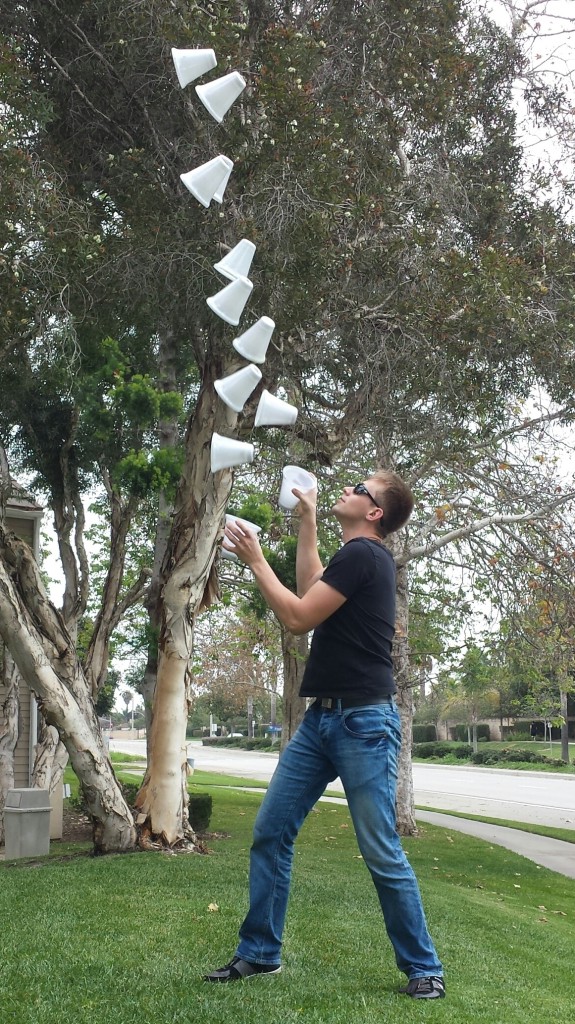 What are you working on at the moment and can you share some of that with us?

Since 2006 I have been hanging with magicians quite a bit of the time. World champion magicians Ger Copper, Jason Andrews, and Veronique Ross (Richard Ross’ wife) are really good friends of mine. Also, when I just started performing on cruise ships, John Taylor, Mark Kornhauser, and Joanie Spina helped me a great deal. By spending so much time with my magician friends, the approach to my shows became more like a magician’s point of view. I noticed that pretty much all juggling shows are similar in size as the show of a parlor magician. No juggler has the look and size of a show equivalent to an illusionist. At the moment I am investing time and money to make my show bigger, so big that I can headline with it in theme parks, performing art centers, and make a resident show on board some of the world’s largest cruise liners.

You spend a lot of time learning about the business side of show business. What’s some of the best advice you can give to jugglers who want to perform as a career?

In 2007 I purchased a business book on “show business.” It was called the “Secrets of a Millionaire Magician,” written by Randy Charach. In this book the author mentioned something I read there for the first time. There are two words in show business: “show” and “business” and “business” is a longer word for a reason. Even if you have the best show in the world but if nobody knows about it (promotion) or if it isn’t something they are looking for (marketing) than they aren’t interested to spend money on it, and as a self employed artist you need money (income) to keep going. I love to practice my juggling, but when I perform juggling in my shows it isn’t really about me. The juggling will need to be packed into a show so my audience will enjoy it. As an artist I will bring my vision across, but I have to do it in a commercial environment. As Daniel Holzman pointed out to me, we create commercial art and we are constantly looking for that sweet spot where we can perform shows that we want to at place where we get paid to do it. Being self-employed I don’t have to go to the office to work for a boss, but that doesn’t mean that I can skimp on the business side (office time, networking and logistical things) to get ready for my shows.
What would you consider some of your top accomplishments to be as a juggler, both technically and from a career point of view?
I started my path as a juggler almost 20 years ago now. I feel very fortunate about all the great things that have come into my life through juggling. I have meet great people, seen the world because of juggling, managed to create an income for myself with it and gotten recognition from it through awards, invitations, etc. Some people will see the awards and honors (for example the big honor to get an invitation to have lunch with the King and Queen of my country) as the top accomplishments. To me I think the top accomplishment that I have achieved is that juggling now provides me the lifestyle that I dreamed about when I was a teenager. I feel the freedom to spend working every day on creating new juggling routines, practicing my juggling skill, performing for audiences all over the world and making people happy with what I do. Of course it hard work but I am passionate about what I do and I wouldn’t want to do anything else! 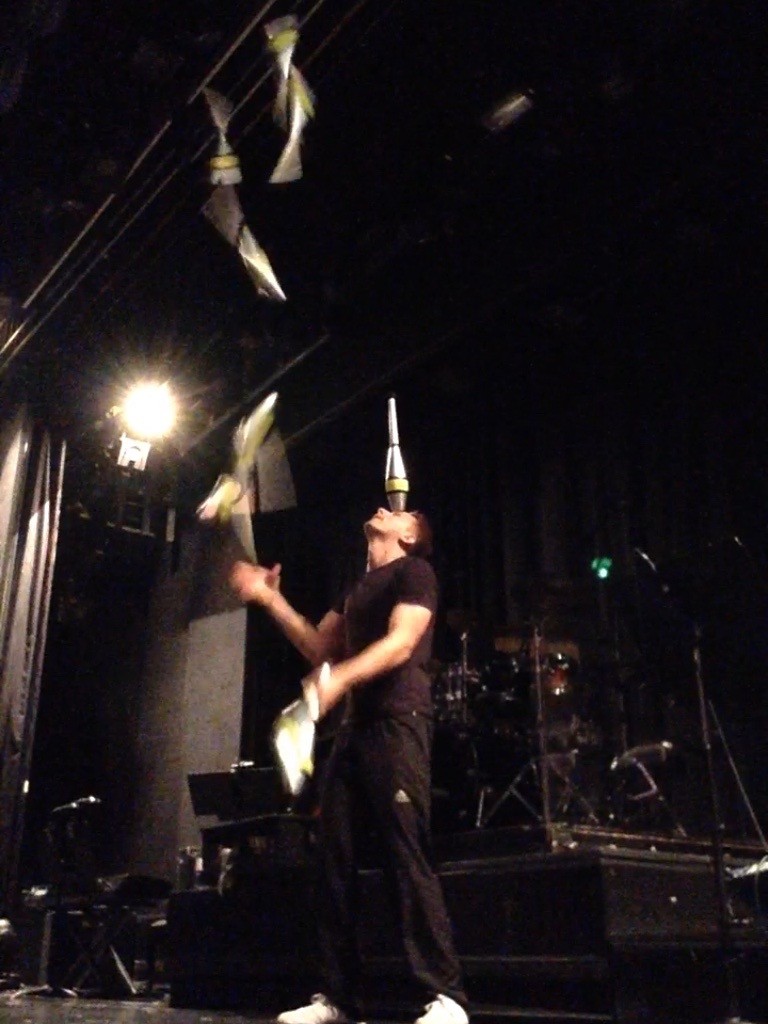 Who are your favorite jugglers and why?

There are many jugglers who I admire and for different reasons. When I was a teenager and started going to the juggling conventions I quickly noticed how friendly and supportive fellow jugglers are; my favorite kind of people! Juggling to me is much more now than a hobby. It’s my profession. As an artist you’re always looking for inspiration. I mostly do my own theater shows and in such a long performance many elements come back and are important. For example technical juggling (Anthony Gatto), comedy (Daniel Holzman, Raspyni Brothers, Michael Davis), class (Kris Kremo, Paul Ponce, Michael Chirrick), presentation (Christopher Rodogell, Francis Brunn, Viktor Kee, Pierre Marchant). Also I admire the work that you (David Cain) do in preserving the history of juggling. I am grateful for the support and friendship I am getting from Freddy Kenton, Daniel Holzman and Barry Friedman, too!