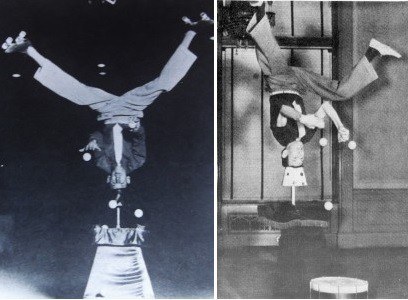 My first exposure to inverted, or upside down, juggling was a picture of Bobby May bouncing five balls off of a drum while balancing on a head pedestal, his roller skated feet pointing toward the ceiling. I was astonished that such a trick was even possible. While May’s trick wasn’t the first example of inverted juggling, it may be the most famous. Alan Howard wrote a long and wonderful article in the September / October 1998 Juggle Magazine on his mentor’s ability to bounce up the five balls of the drum while balancing head down. Therefore, I won’t go into much detail here other than to say that while May only performed five balls (rather than his usual three) for a few months, the feat has never been duplicated in performance. Here are two pictures of Bobby performing the five ball inverted bounce. 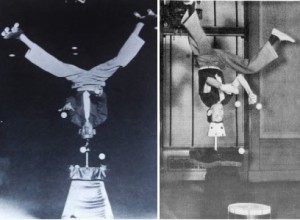 I’m aware of four other jugglers who have done ball bouncing while balancing upside down. One was Chester Dolphin, a contemporary of Bobby May. He copied May’s trick and did three and four balls off the drum. Even though Bobby asked Chester to stop including the trick in his act, Dolphin continued to perform it, as he did other inverted tricks, such as the one in the picture below. 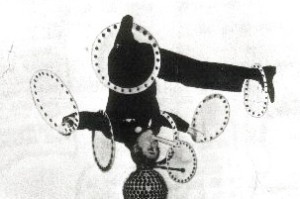 Another inverted bounce juggler was Marko Dzamtuvski. Marko trained in a Yugoslavian circus school and learned to juggle three and four clubs while balancing upside down on a head pedestal before trying inverted ball bouncing. He eventually performed a three ball cascade and shower and a four ball shower off a drum. In practice, he was able to achieve around twenty catches of five balls and even a flash of six balls off the drum. 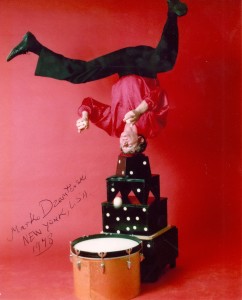 The most recent inverted ball bouncer is Mario Walter of the husband and wife team of Duo Danee. While he does a head balance like those already mentioned, Walter bounces balls off of an inclined surface that is placed in front of him rather than a drum beneath him. He also passes balls with his wife, Diana, while she is also balanced upside down. You can see their act in the following video.

The other inverted ball bouncer was Enrico Rastelli, who will be discussed later.

Some of the earliest known examples of inverted juggling involve passing hoops and rings. Below is a poster for early twentieth century juggling troupe Van De Velde and Company, showing one of the group members doing a head to head balance while passing hoops. 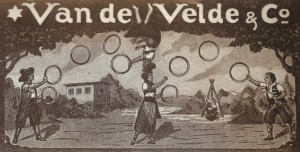 Another well known troupe that did a similar trick was the Uessums. Below are two pictures of them. Notice that they are passing more hoops than Velde and Company and the addition of the rolling globe in the first photo. 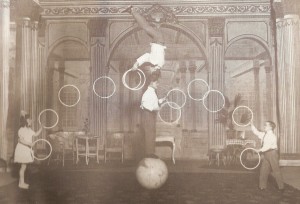 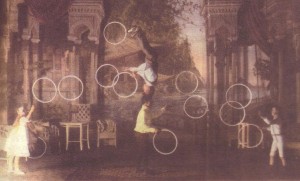 A similar trick was done more recently by the Four Prokofies, although it differs in that two jugglers are upside down and no head to head balancing was done.

Head to head balancing and juggling was performed by Enrico Rastelli and his father with Enrico being the inverted performer. The poster below shows the legendary juggler juggling four balls and four torches upside down as well as performing devil stick.

Rastelli also performed two upside down juggling tricks in his solo career. One of these was juggling three sticks while spinning a pole on his feet while turning in a circle on a head pedestal. The other is the last inverted ball bouncing trick. Rastelli bounced two balls while doing a one handed hand stand, spinning a ring on one ankle and holding a ball on his  instep. You can see two different performances of both of these tricks in the following video.

Perhaps the greatest inverted juggler of all time was French performer Andre Reverhos. He was quite famous for juggling three clubs and spinning two rings on his feet while balanced upside down on a ball. In practice he could run five sticks and flash six sticks upside down. Here are two pictures of Andre performing his signature trick as well as one of him doing the five stick version in practice.

Other jugglers performed this same trick. Here is a picture of French juggler Alain Diagora doing it. 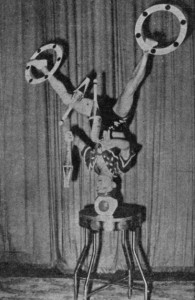 The same trick was also performed by Tito Reyes in the 1960s and 1970s. Below is a picture of Reyes doing the trick and a video of Tito performing.

Tito’s son Rudolfo now performs the same trick with rings rather than with clubs. 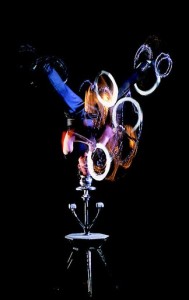 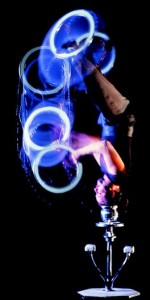 Others have performed similar tricks while juggling balls. Pictured below are the male half of the Rondilles, Gina Medro, and Korni, each juggling three balls inverted. 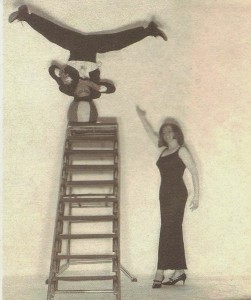 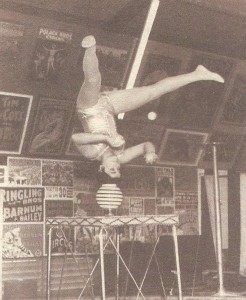 Another example of head to head juggling and balancing was done by Duo Ignatov, the husband and wife team of Leonid and Lidia Ignatov. They are the parents of Sergei Ignatov Jr. and Leonid is the brother of Sergei Ignatov. Their act includes Lidia juggling three balls and spinning a hoop on one leg while balancing head to head on top of her husband while he juggles four balls. You can see pictures and video of this trick below. 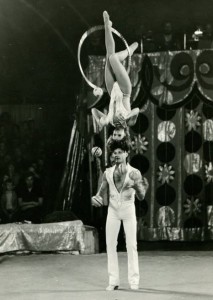 Another current act that does a head to head balance while juggling is the duo of David Graham and Tobin Renwick. They are known as The Flash and as The Red Trouser Show. They do a steal of three balls from the bottom performer (David) to the inverted juggler (Tobin). The following video shows the process of how this trick was learned.

The one thing that all of these jugglers have in common is that they all had to balance while juggling at the same time. There have been a number of more modern jugglers who have found ways to do inverted juggling without balancing. Well-known comedy juggler Frank Olivier uses an unfortunate volunteer from the audience to assist him in maintaining his inverted position. Watch Frank perform this hilarious trick with a tv host in the following video.

Inverted juggling using gravity boots (boots with hooks on the ankles) to hang from a bar has become popular in recent years.  The Guinness World Records Book lists a record for endurance while juggling three balls suspended. Many jugglers have taken on the challenge of breaking this record. In 2005, the record stood at 55.9 seconds and was held by Australian Mark Easson. Since this time, the record has been beaten by Americans Erik Kloeker and Ashrita Furman. 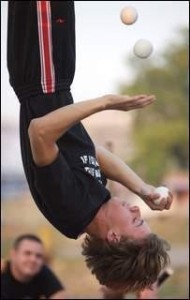 At the time of the writing of this article, the current record is 9 minutes, 17 seconds, held by Zdenek Bradac of the Czech Republic. Bradac also holds the record for the most balls juggled while suspended upside down, achieving twenty catches with four balls.

American David Ferman performed three fireballs suspended on the well known television show America’s Got Talent in 2013. You can see video of this performance below.

It should be noted that the non-balancing inverted juggling frees up the head to be able to look up rather than just straight ahead. This makes this type of inverted juggling much easier, not even taking into account the lack of adding the balance to the trick. The fact that jugglers doing a head balance can’t move their heads at all makes the achievements of Bobby May and Andre Reverhos all the more incredible.