As forms of entertainment, juggling has a much longer history than skating revues, but the two skills intersect like the center of a figure 8 when looking back on 20th Century performances starting in the 1940s. There has been a long line of very talented jugglers who have transferred their routines and adapted their talents to performing on ice or for the roller rink. Specialty / novelty acts like juggling have been a necessity of such shows, as they provide variety for the audience and give rest for the professional skaters during the show. Let’s take a look at some of the jugglers who have performed in these shows.

Bobby May – Few jugglers are as revered as Bobby May, and this versatile juggler spent a number of years performing in both roller and ice skating shows. Bobby started with the Roller Follies of 1942 and quickly switched over to the larger Skating Vanities show, for which he performed on and off from 1942 through 1948 (or 1947 according to some sources). Bobby worked countless hours on his skating and adapting his routines for this venue. Like other skating jugglers, he had to adjust to throwing for where he would eventually be when the throw came down to him. Among his routines were 3 clubs (including back crosses), 4 clubs, 3 balls, his cigarette trick, hat manipulation, and his famous headstand while bouncing 3 balls off a drum. His finale was his lighted trick, where he would juggle five lighted balls while spinning a ring on each leg and spinning a lighted ball on a pedestal on his head, all in the dark. Bobby then switched to juggling in ice shows – primarily Holiday on Ice. He appeared (again on and off) from 1949 – 1952, and again in 1956 and 1957, performing many of the same routines.

Serge Flash – Excellent juggler Serge Flash brought his immense skills to the rink with Ice Capades in 1941 and 1942. He performed routines with clubs and ball and stick. A movie entitled Ice Capades was released in 1941, and though the online credits list Serge Flash as being in the film, he unfortunately doesn’t appear in it. Click here to see a video of Serge performing, though not on ice.

Trixie – Much on Trixie’s ice skating career was covered in the recent article on Trixie found here, but here’s a brief recap. Trixie Firschke (later Larue) debuted with Ice Capades in 1942 and seamlessly transferred her stage routines to the ice. She performed a six plate juggle with a head ball bounce, ball and mouthstick, ball spinning, lasso spinning, boomerang hat juggling, top hat juggling, and routines with either three and four tennis rackets or three and four clubs. She also did a one handed handstand while twirling a ring on one arm and one leg, and a series of back handsprings across the ice. Trixie rarely dropped, and it’s been reported frequently that those on tour with her would keep count of her drops for an entire season, and usually on one hand! She performed with various ice shows over a span of 20+ years. Below is a wonderful color video of Trixie juggling in Ice Capades.

Boy Foy – Like Bobby May, Boy Foy performed in the roller skating show Skating Vanities. However, unlike May, he didn’t perform on skates. That didn’t mean he was without a wheel, though. Foy performed routines almost exclusively while riding a unicycle. Like May, he had a pair of female skaters who traded out props for him during the routine. Boy Foy appeared in Skating Vanities from 1949 – 1953. Below is a great video of Boy’s act on ice.

Kay Farrelli – Kay was a Danish juggler who performed with several ice skating revues. He was with Holiday on Ice from 1948 – 1950, rotating some with Bobby May. He was also with Ice Vogues in 1952 and 1953. He performed top notch routines with three and four clubs, and ball and stick.

Lou Folds – Lou Folds (also referred to often as Lew Folds) juggled in numerous ice skating venues in the ‘40s, ‘50s, and ‘60s. These included appearances at the Iceland Restaurant in NYC (1946), Gay Paree ice revue at Roxy Theater in NYC (1953), The Latin Quarter in Boston (1953), Carnival on Ice (1955), Ice Silhouettes (1958), Icetime of 1948 (1947 – 1948), Adventures On Ice (1962), and Ice Royals (1965). Lou was a versatile juggler, and was famous for performing wearing a cape, from which he would produce his previously unseen props. He juggled a huge variety of props, including clubs, castanets, plates, musical instruments, and balls. He also performed a trick on ice where he bounced balls off a drum while blindfolded.

Tommy Curtin – Tommy Curtin, who went on to win the 1981 IJA Nationals Competition, performed from 1962 – 1973 with Holiday on Ice, touring the United States, South America, and the Far East. Tommy saw Bobby May perform on ice at an early age, and was also encouraged by Gil Dova to juggle on ice. In addition, he worked with ice shows in night clubs and theatres from Minneapolis to Miami to Toronto, and fairs around the country. TV appearances with Tommy juggling and skating included Captain Kangaroo and Ed Sullivan shows. He also performed in malls skating on plastic ice in a production titled Fantasy on Ice. He appeared on the television program Stars on Ice twice in 1978, and performed for three years in the ice show at Busch Gardens in Tampa, Florida as well. Tommy performed routines with plates, plate and bottle clubs, hats, and balls, among other items.

Albert Lucas – One of the most well-known juggler/skaters is Albert Lucas. One of the best technical jugglers of the modern era, Albert was also a child prodigy. He could juggle 5 balls at the age of 5, and won the IJA Numbers Championships at the age of 10. As an adult, he broke numerous juggling world records. He is the only person to have flashed 13 rings, and won the Individual Championships and the solo Numbers Championships events for balls, rings, and clubs at the 1984 IJA competitions. From the ages of 12 through 22, Albert performed his act on ice with Ice Capades. He also juggled in the Busch Gardens ice show for several years, and in Fire & Ice at the Hacienda Hotel in Las Vegas. At one point, he performed a combination trick of balancing on one ice skate, spinning two rings on the other leg, balancing a ball on a mouthstick, and juggling nine rings. His normal routine at the Hacienda included a long run of seven rings, four and five tennis rackets, three clubs, balls with pocket catches, a combination trick, and 3 torches. Albert was famous for rarely dropping, despite performing such a technically challenging act. 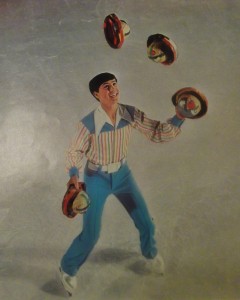 David Lucas – Like his brother Albert, David Lucas (aka David Lee) also performed for a number of years with Ice Capades as a teenager in the 1980s. He began as an assistant to his brother, but eventually got his own full act performing many of the same routines that made his brother famous. Many times, the brothers were performing at the same time, but in different touring companies of the Ice Capades. David was also a very strong technical juggler and also rarely dropped.

TJ Howell – Performer TJ Howell has combined skating with juggling and unicyclying for nearly thirty years. He has performed in ice shows at amusement parks including Busch Gardens, as well as theaters, hotels, and hockey game intermissions. His act includes rings, torches, and clubs, as well as riding a unicycle with studded tires.

Christa Rypins – For much of the 1980s and 1990s, Christa Rypins performed in smaller ice shows such as those at amusement parks. She was one of the better skaters to juggle on ice, and performed routines including 3 clubs, 3 torches, rhythmic gymnastics ball, and ribbon. You can see Christa by clicking here and here.

Matt Rieckhoff – Better known as Matt the Mime, Matt Rieckhoff performed in numerous ice shows, including smaller shows at amusement parks, hotels, and dinner theaters during the 1990s and 2000s. Matt included a strong 3 club act and 3 torch routine, and did a number of praiseworthy mime bits as well.

Bob Welz – Former Ringling Brothers Circus ringmaster Bob Welz juggled with Holiday on Ice in 1976, Ice Capades in 1979, and appeared on the TV show Stars on Ice as well.

Gil Dova – This well-known comedy juggler performed on ice at times, including on a TV broadcast in December 1966 when “The Andy Williams Show” aired his Christmas on Ice show.

Niels Duinker – Danish juggler Niels Duinker is currently working on transferring his stage act to the ice, including routines with up to 7 clubs, 8 rings, 7 balls, and 2 diabolos.

Bobby Jule – American comedy and technical juggler Bobby Jule performed his act on ice skates during the 1950s and 1960s.

Victor Ponce and Sylvia – Victor Ponce was able to transfer his famous stage act to the ice, as you can witnessed by clicking here.

Paul Ponce – Victor’s son Paul, one of the best jugglers performing today has also performed in ice shows, as you can see in the following video.

Cleat Wearers – Both David Cain and Steven Ragatz trained to skate and juggle in ice shows at amusement parks, but each ended up juggling on ice while wearing cleats rather than skates, during the 1990s.

There have been numerous other jugglers who have juggled in skating shows – so many, that to create an exhaustive list would be impossible. Ice shows remain somewhat popular today, so it isn’t a surprise that jugglers will continue to adapt their routines to the ice when the opportunity arises – as performers want to perform! Maybe one day we’ll see someone perform an eight ring juggle while skating a figure eight.