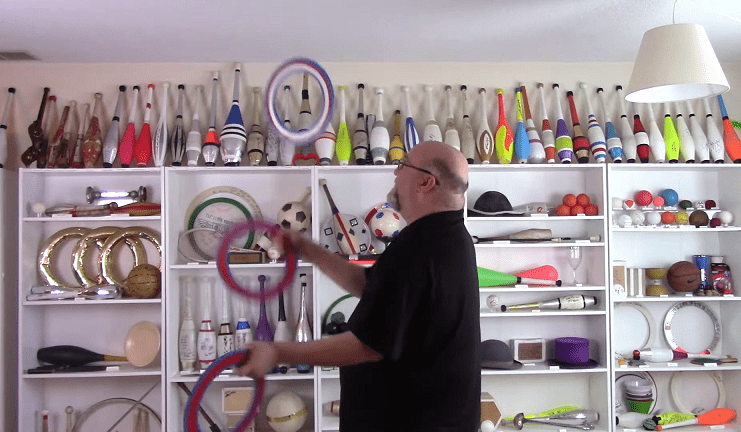 While juggling and magic have often been closely related throughout history, there are very few examples of props that have been created that combine the two art forms. Today we’ll look at a few examples of juggling rings that also have magical elements to them.

Color change rings have been around for many decades. Lottie Brunn and Henrico are two of the earliest jugglers I’m aware of that performed with rings that were different colors or designs on opposite sides. While juggling the rings facing sideways to the audience, a juggler catches each ring in such a way as to flip the ring during the catch and throw it with the opposite side now facing the audience. This gets a great response from the audience and has long been a popular trick.

However, in the 1970s, two sets of juggling rings were invented, created, and marketed that took the classic color change a step further, by combining juggling with magic to create rings that change color more than once. I had long searched for either of these sets for the Museum of Juggling History, and recently received not one, but both sets from the family of a deceased amateur juggler.

The first set was invented by magician, pianist, photographer, author, attorney, and CPA Sam Gainer. These were marketed as Sam Gainer’s Magical Rainbow Rings. They changed color twice, going from red to white to blue (or the other way around). You can see an ad for them below from 1979. 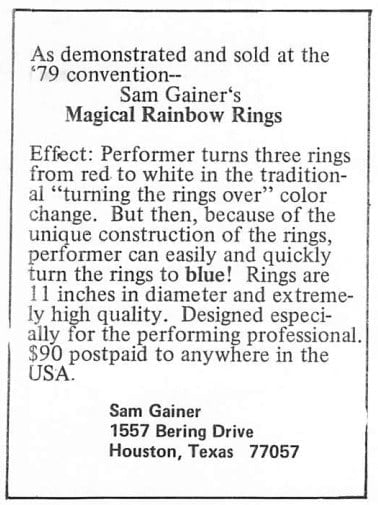 $90 in 1979 was very expensive, equaling $320 today. This high price resulted in Sam only ever selling four sets of the rings. However, I will attest to the fact that they are indeed very well made. I also can attest that they get quite a reaction, for when I put the a video of the routine on Facebook, it received over 3,000 views in two days.

The other mysterious color change rings were invented in the 1970s by magician and juggler Bob Blau. They changed color not just once, but three times, for a total of four colors. Here’s a description of them and their creation from the Summer 1987 Jugglers’ World Magazine:

This disconcertingly active individual (Bob Blau) has come up with perhaps the ultimate melding of magic and juggling: a four color changing ring. These three rings, changing red, blue, white, and striped cannot be manipulated by a non-juggler and could not have been conceived by a non-magician. It is the remarriage of estranged parties into the ancient “jongleur” – neither one nor the other, but the true magician/juggler. One could say that this octogenarian has literally reinvented the juggling wheel. Blau credits the original idea to fellow Texan Sam Gainer, with additional work by himself and Sam Hawkins. The idea has been in the works since 1974 and is now perfected. From the standpoint of magicians, it’s a good trick: angles are not important (but of course the juggler wants the flats facing the audience), and, although Blau would rather not have the audience closer than 10 feet to his “gimmicks,” these are stage props anyway and show best at theatre distances. The “gimmick” requires a magician’s smooth touch, a little sleight of hand that makes them unsuitable for close-up work on the street or by the untrained. From the juggler’s standpoint, they provide a startling visual surprise. Although a lay audience is pleased by the two-color change, the third comes as a surprise. And by the fourth, it’s all a mystery. The trick employs the standard turn-over in the cascade with the addition of a gimmick hidden by a little misdirection. It takes getting used to. They are constructed of a combination of wood, metal and plastic, and Blau has refined the device to make it lighter, easier to handle and more visual in motion. 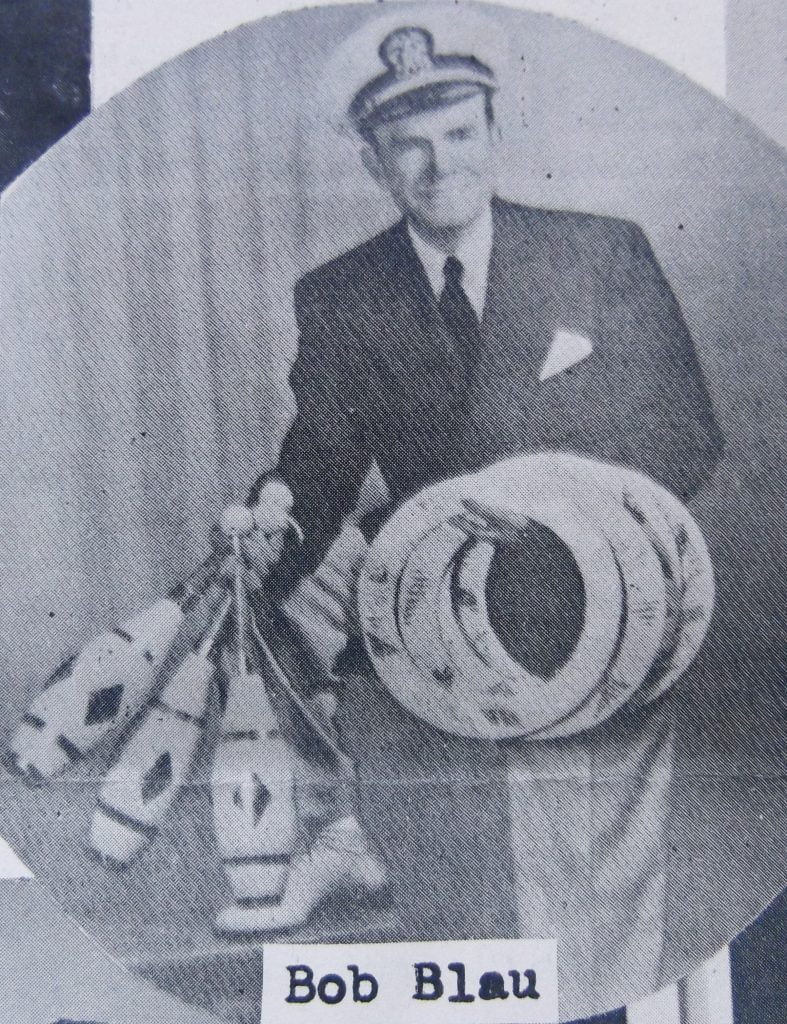 The set of Bob Blau rings I received are in somewhat rough shape, making the performing of the routine less than ideal. Nevertheless, below is my attempt to show you the routine, or at least how I imagine it was done.

While I’m tempted to reveal exactly how the rings work, my magician friends have counseled me not to do so. I will say that it would be very difficult to create your own and that they are very heavy.

Oddly enough, these are not the only juggling rings that have been made to be used in conjunction with magic. The first is a break-apart ring that was used by Johnny Lux. You can see it below, followed by Johnny’s regular rings. These rings are now on display in the Museum of Juggling History. 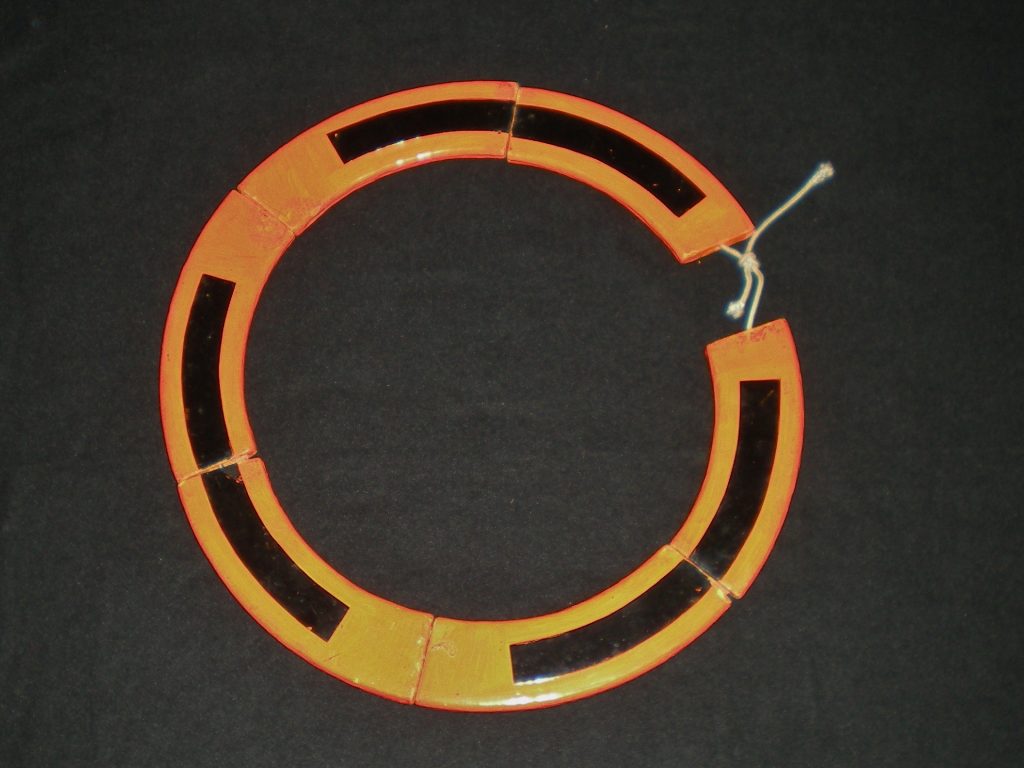 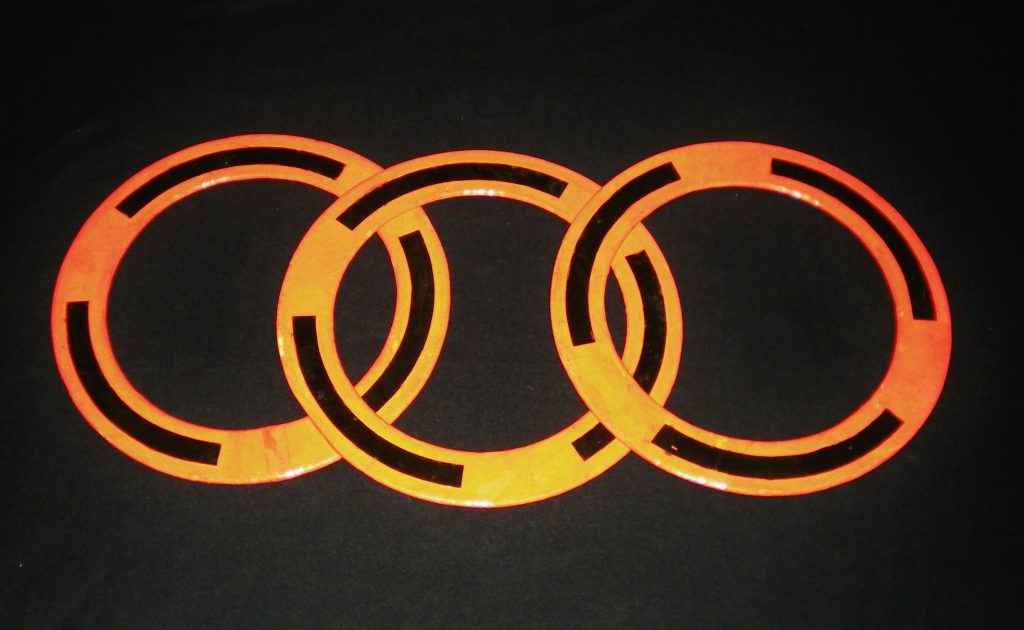 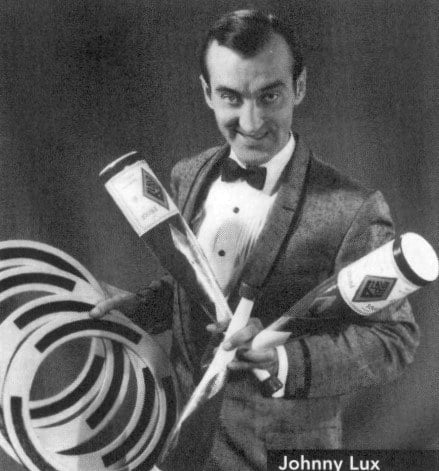 Lux used it in conjunction with a volunteer. After juggling with the three regular rings, he would invite a volunteer onstage to toss in a fourth ring. Grabbing the breakaway ring in such a way to keep it together and hide the gap, he would then hand it to the unsuspecting volunteer. As soon as Johnny let go, the ring would fall apart in the volunteer’s hand.

This is very similar to the popular breakaway magic wand that you can see being used in the following video.

Another set of magical juggling rings can be found in the Museum of Juggling History. The were used to perform a version of the standard linking rings trick while juggling. I’m still searching for any information about these, but they do appear to be a few decades old. They were donated by Chuck Clark, who found them in a magic store. My guess is that they were juggled facing the audience rather than the usual sideways to the audience ring juggling in order to make the gap less noticeable. Then one of the solid rings was tossed high and the juggler would link the other solid ring onto the split ring and cover the gap with their hand. Then the other hand would catch the falling ring. The audience’s attention would be drawn to the tossed ring, misdirecting them from the linking below, which they wouldn’t be expecting or looking for. I suspect a modern version of this with hidden magnets wouldn’t be difficult to make.

If you know anything more about these, please contact me.