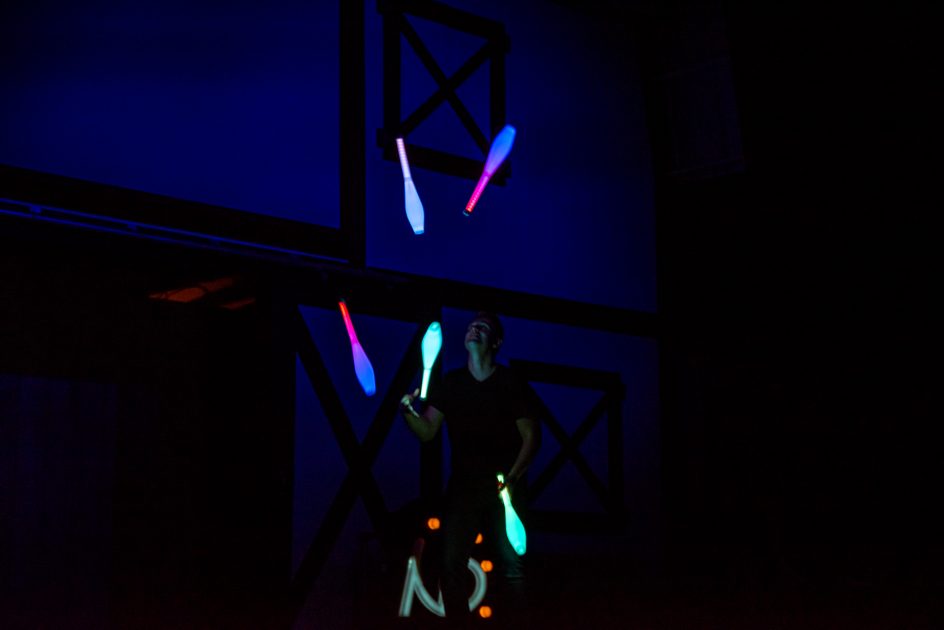 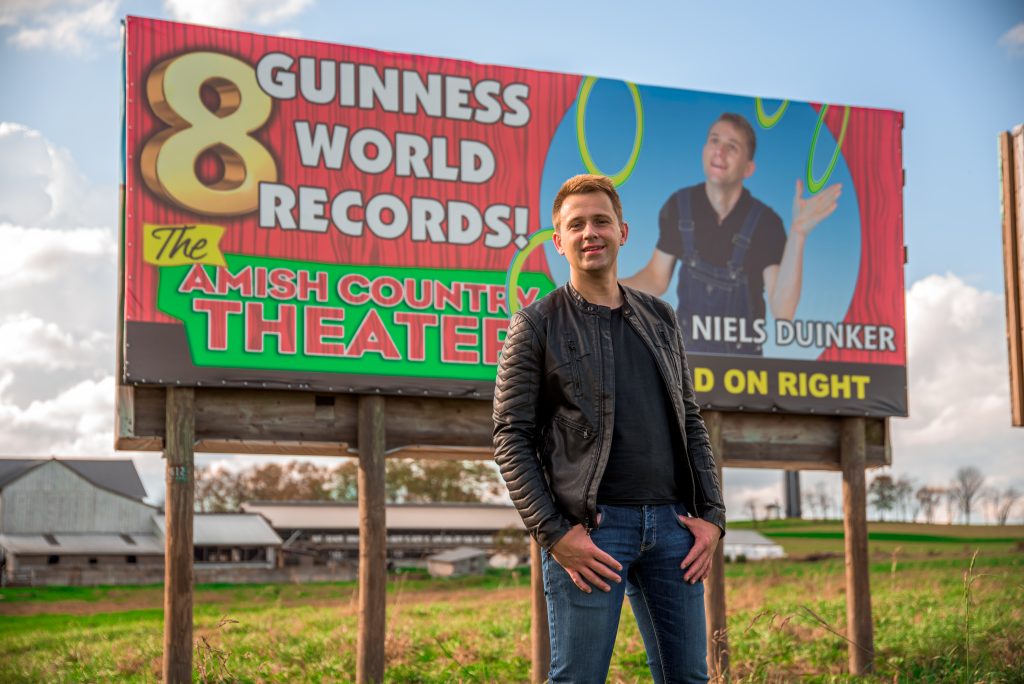 Around a century ago, during the height of vaudeville, jugglers like Enrico Rastelli, Kara, and Paul Cinquevalli drew crowds to theaters. During the same time, Joseph Rosani became the first juggler to present a full-length, one-man juggling show, which he toured around the United States. While it does happen, it’s quite rare for a juggler to headline a theater show, especially one that doesn’t travel. 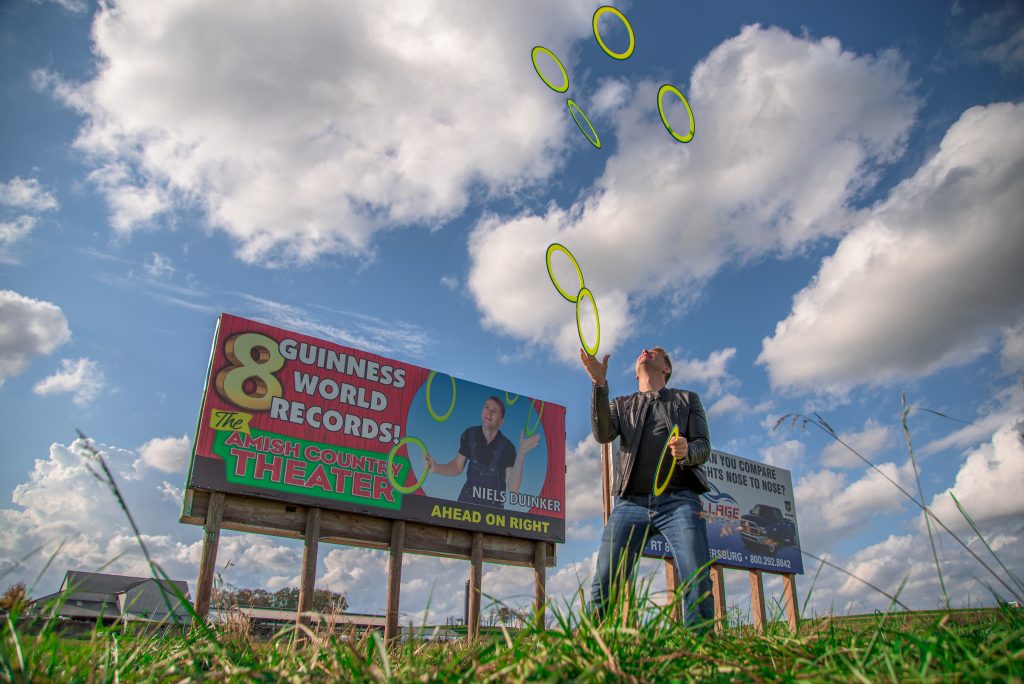 In this article, we would like to highlight Niels Duinker’s newest resident theater show located in Ohio’s Amish Country. Amidst the Covid-19 virus, somehow Niels Duinker has managed to open his show and keep it going. 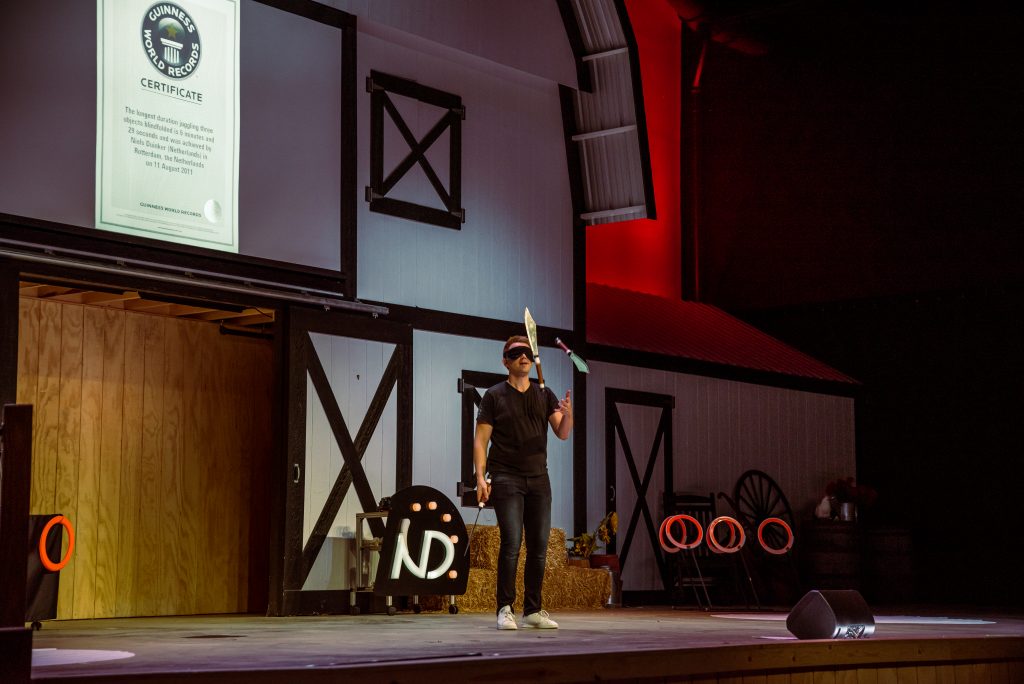 Comedy juggler Niels Duinker was born in The Netherlands but moved to the USA a few years ago. After graduating from college, Niels honed most of his routines by performing for eight years as a guest entertainer in the theaters onboard luxury cruise liners. Niels is now living in America. In 2004, he visited the USA for the first time and saw the shows in Las Vegas. Europe doesn’t have tourist towns like Las Vegas, Branson, or Pigeon Forge. Niels started dreaming his American dream of how great it would be to someday headline a juggling show in such a town. Worldwide, there are many resident magic shows, but resident juggling shows are far and few in between. The Passing Zone, Raspyni Brothers, Mark Nizer, and the Flying Karamazov Brothers are great representatives of the art of juggling. They were the closest thing to what Niels wanted to do. Also, Jeff Civillico had an excellent 10-year run headlining as a comedy juggler at various casinos in Las Vegas. 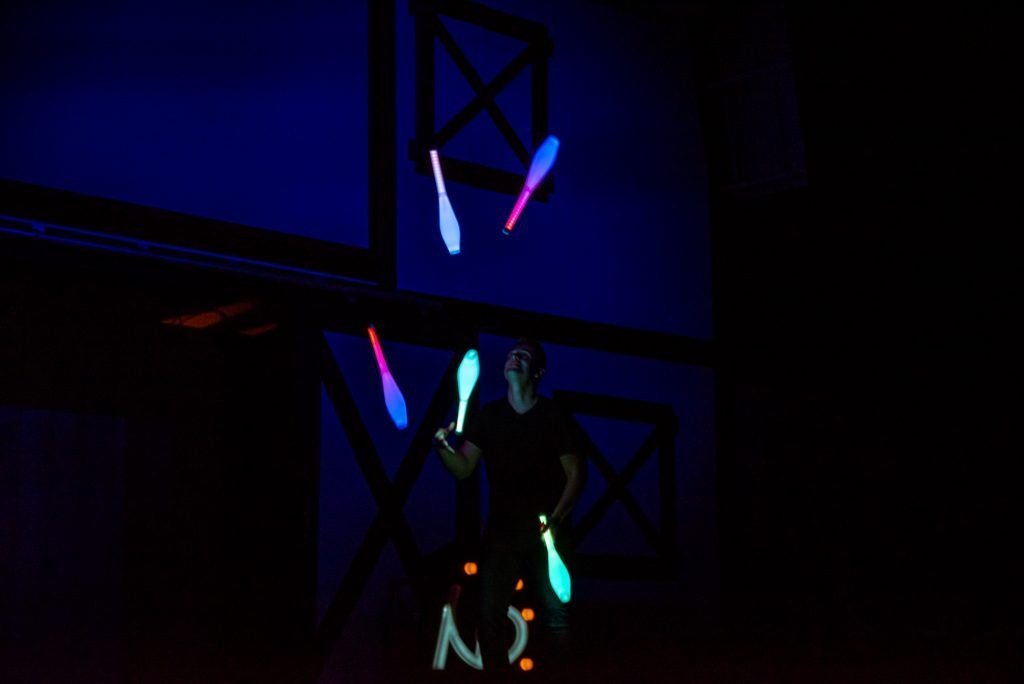 After Niels‘ cruise ship career, he wanted to learn about the dynamics of selling a theater show on land, and he accepted an offer to perform at Dolly Parton’s Comedy Barn Theater in Pigeon Forge, Tennessee. During his three years there, Niels gave nearly 2,000 performances and learned a lot. Niels also helped with the online marketing of the theater. That experience now serves him very well. In preparation for the show he is doing now, Niels received help from comedy juggling legends Daniel Holzman and Michael Davis. 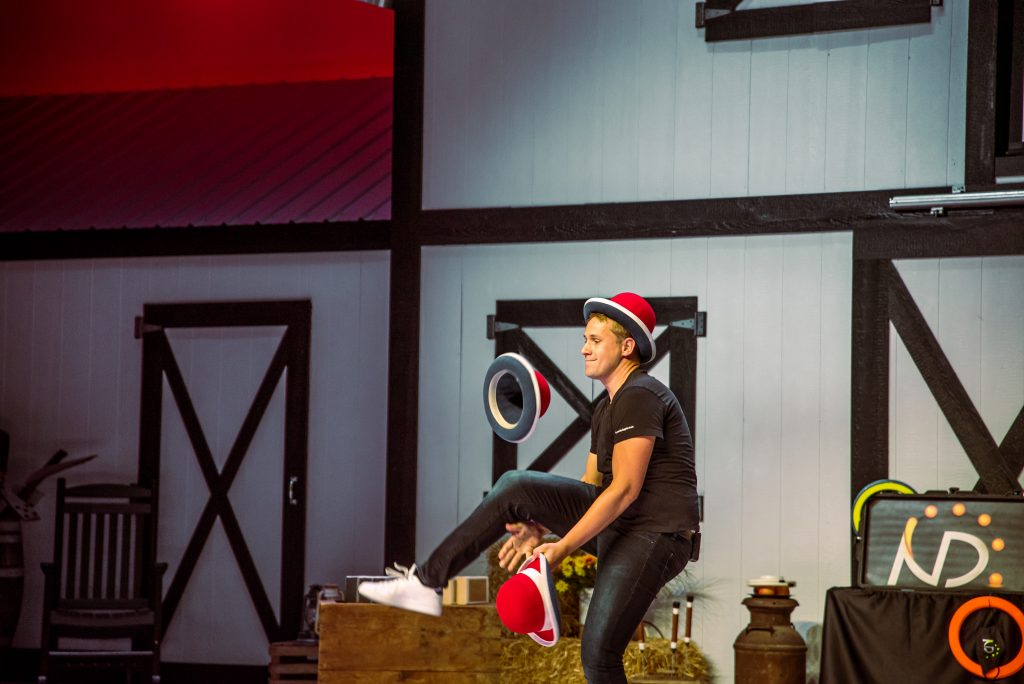 The Amish Country Theater is a 600-seat theater located in Ohio’s Amish Country. People from all over the USA visit Northeast Ohio to learn about the world-famous Amish. The Amish are early risers and also go to sleep early. The founders of The Amish Country Theater noticed a business opportunity with nothing to do for the tourist in Amish Country after 6 PM. So, they started a clean comedy variety theater, which turned out to be a great move. Niels is now performing in that theater, and his show is called “Morning Throwdown.” The show takes place at 10 AM in the morning. This timeslot works well with the bus groups, senior citizens, and families that visit Amish Country and stay in the largest hotel in the area, which is under the same management (and roof) as the theater.

Niels’ show is full of variety, not just from a juggling standpoint, but in general. Before Niels opened his show, he spent two weeks at the Museum of Juggling History archives studying juggling. He got inspired by the different tricks and styles of juggling that he saw in the massive archives of the only juggling museum in the world. Almost everyone likes juggling, but to sell theater tickets in a tourist town like the one where Niels is now working, it’s crucial to have a solid, family-friendly variety show. Niels‘s show is full of comedy and various styles of juggling. At one point, he presents a tribute to the great jugglers of the past. He performs a juggling trick originated by Salerno, LED routines, a few socially distanced volunteer routines, and a couple magic effects. 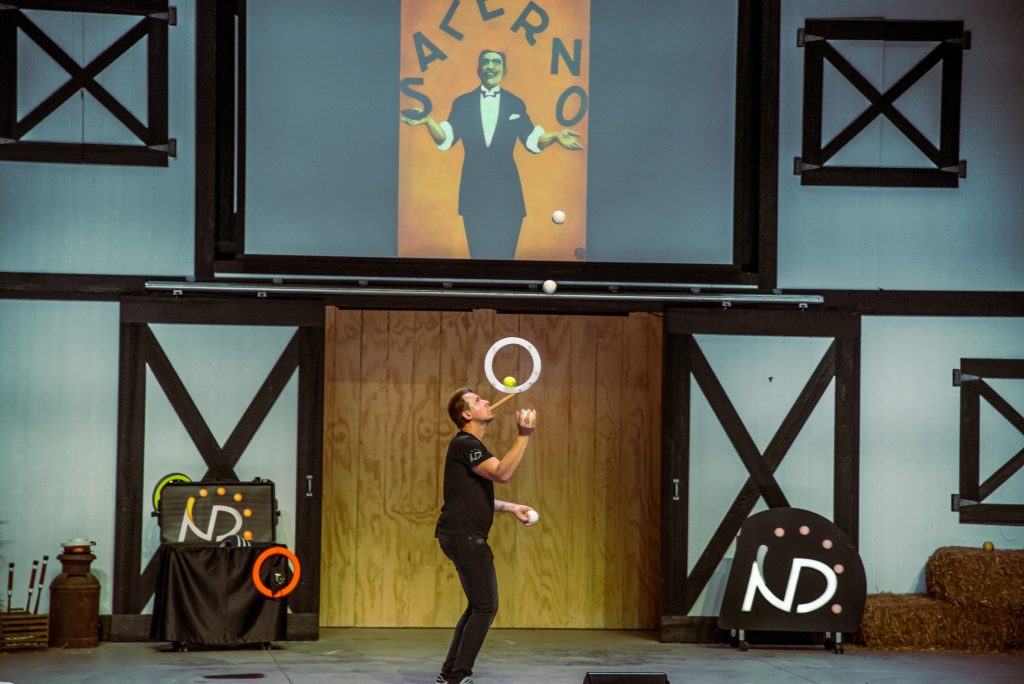 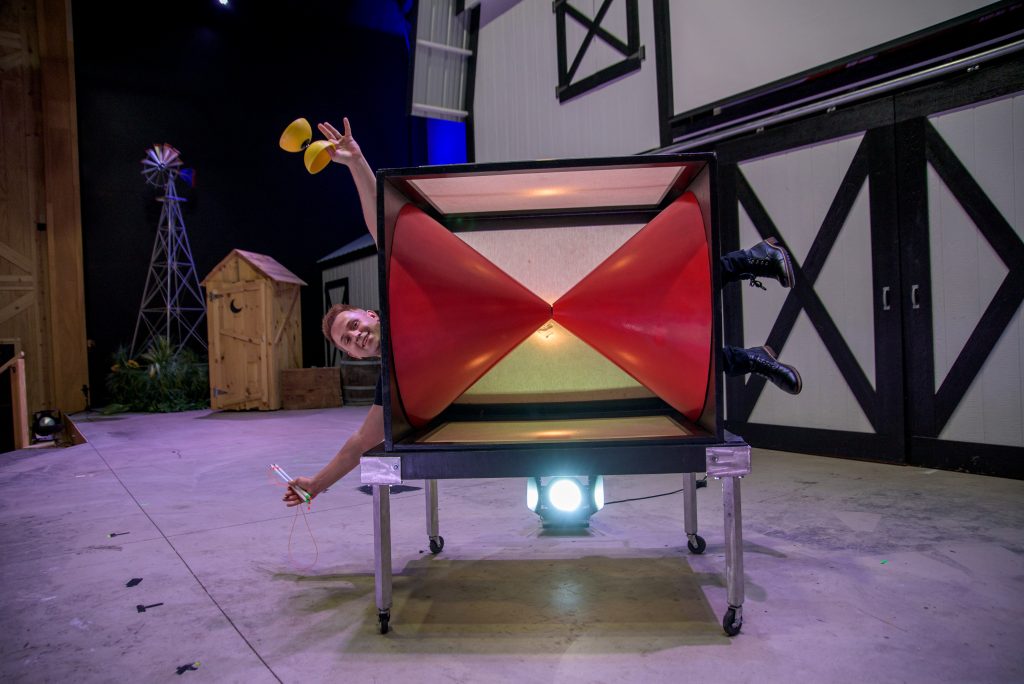 The focus, though, is still his world-class juggling. Since the show takes place in the morning, Niels decided on bringing a one-hour long show that hopefully leaves the audience wanting more before they get too hungry for lunch. After they have had lunch and a wonderful homestyle Amish dinner, many people come back to the evening performance at the theater, which is a production-style show with more comedy, a ventriloquist, music, and more juggling by Niels. 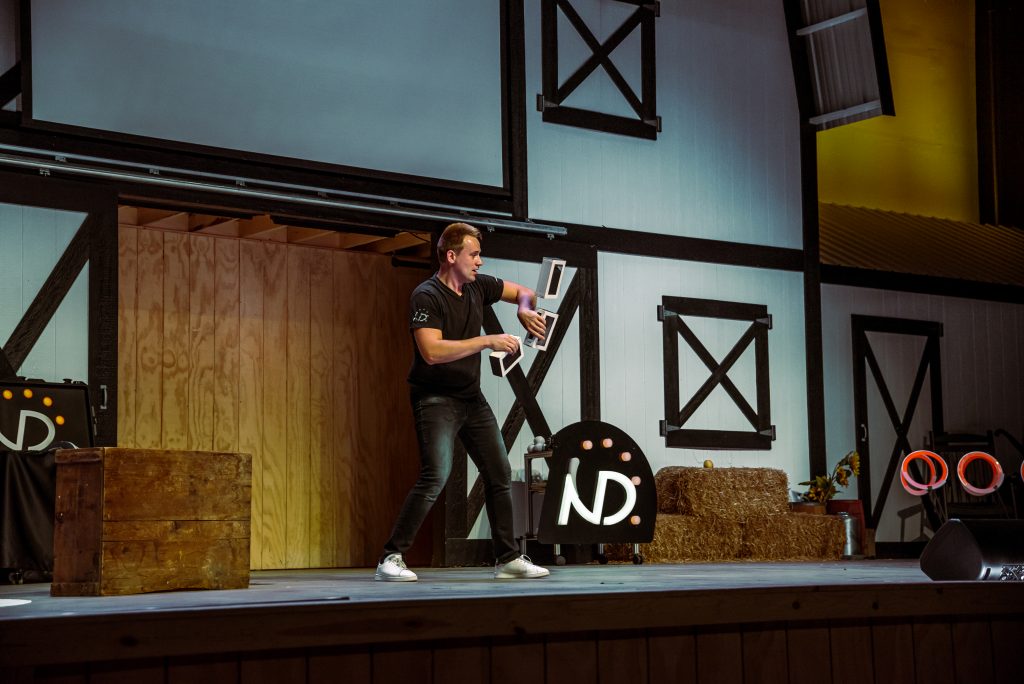 Before Siegfried & Roy went to Las Vegas, there were no magic shows in there. Now nearly every casino has a magic show. We hope that with this show, Niels is starting a trend where, much like in the times of Rastelli, Kara, and Cinquevalli, audiences will come to theaters again just to see a juggler! To learn more about Niels’ show and the Amish Country Theater, you can click here and watch the video below.