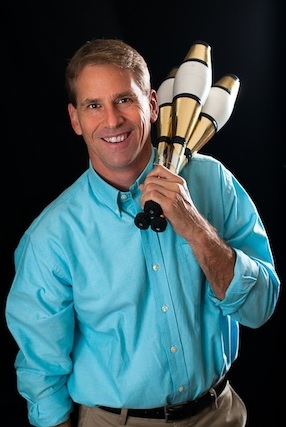 Our community has lost a very talented and original juggler. Scott Burton, 56, passed away November 27th, 2017. He was preceded in death by his father Harvey Burton. He is survived by his wife Linda, daughters Rachel & Maya, sons Dylan & Matthew, mother Jean Burton, siblings Arlene Krzyska, Debra Deacon, David Burton (Amy Ouradnik), Jack Burton (Juliet), Rosemary Willliams (Paul), and ex-wife Cheryl Conway, along with many nieces & nephews as well as other relatives and friends.

Scott Burton was a frequent competitor in the IJA Stage Championships, competing in the Individuals Championship in 1984, 1986, and 1991, with Scott taking 2nd place in 1986 behind Anthony Gatto. Below is a video of Scott’s 1986 competition routine.

Scott also won the Teams Championship with Brian Wendling in 1983. You can see a practice video of the two of them below.

Scott learned to juggle at the age of 12, taught by his older brother Jack. At the age of 19 he met Brian Wendling, with whom he honed his skills and formed a life long friendship. Scott worked with Brian doing team bookings and also did solo shows that featured more comedy and stand up material. As a solo juggler, Scott was known for his highly original and technical work with 3 and 4 clubs, cigar boxes, 3 balls, and his rare talent for juggling five balls while lying on his back. The following video shows Scott’s flair with 3 clubs.

In 1992, Scott was diagnosed with high grade osteosarcoma stage 4 cancer in his leg. After a long recovery, he developed a passion to help and support cancer survivors and their caretakers. He began to do cancer survivor/medical/nurse/speaker performances. It was 45 minutes of comedy (some of it dark humor about cancer) and 15 minutes of juggling at the end that amazed the audience. He was a very popular speaker within the healthcare field.

Scott loved to write – everything from screenplays to cartoons to many editorials published in the Star and Tribune. He self-published a book, A Life in the Balance, which followed his fight with cancer, using his favorite tool – humor. Scott had an intense faith and love of life, and found grace in all of its beauty and pain.

Scott was a universally loved friend and a well respected and very talented juggler. He will be greatly missed. Our condolences go out to his family and friends.

Jay Gilligan cites Scott’s 1991 IJA Individual Championships performance as being a big inspiration to him over the years. Scott suffered from many drops in this act, perhaps due to the cancer that was unknowingly already at work in his body, but the creativity he displayed was recognized by all in attendance. Below is video of this act.