From the 1870s until 1960, jugglers in the USA used hollow wooden clubs, primarily made by Edward Van Wyck and Harry Lind. Some Van Wyck and Lind clubs made their way to Europe and other parts of the world, but not in great numbers. Instead, most European jugglers used one of three other types of clubs.

One was the cork club, made using hardwood handles / dowels and cork bodies. The dowels would have the handle end lathed and then the other end would be inserted and glued into a block of cork. This cork would then be lathed into the proper shape, creating a solid, but light weight club. Sometimes balsa wood would be used instead of cork.

A second kind of club was the basket / wicker club. These clubs featured a wooden handle and a hollow body made like a basket, with a dowel going through the body. You can see a few of these in the following photos.

Some of the most famous basket clubs were used by the Mongadors, who covered the body of the clubs with plaster of Paris.

The third kind of club used by European jugglers of this period was what I call skeleton clubs. This term refers to clubs that feature a wooden handle, an internal dowel that was either just a continuation of the handle or, more often, a thinner dowel inserted into the end of the handle. This dowel is surrounded by one or more disks (usually wooden) that help define the shape of the body. The outside of the body is then surrounded by bamboo ribs. The dowel and ribs then meet at an end cap. The body of the clubs was then usually, but not always, covered in some type of fabric or foil.

This type of club is described in two older books about juggling. The first is How To Do Juggling by John J. Mills, which was published in 1946. You can see a skeleton club, which is referred to as a Built-up club, illustrated below.

The other one is the Russian book The Art of Juggling by Nikolai E. Bauman, which was published in 1962. You can see a skeleton club described below.

Here are some of the many examples of ribbed skeleton clubs, both with and without the coverings, that are on display in the Museum of Juggling History.

Next is a foil wrapped skeleton club formerly owned and used by Fudi (György Zsilák). It was made by Fudi’s father, based on the clubs used by the Bremlovs.

The following club was used by the Two Linas during the 1940s.

The skeleton club below was used by the Ernő Schneller starting in the 1950s.

Below are three of Ernest Montego’s early skeleton clubs from the 1950s. 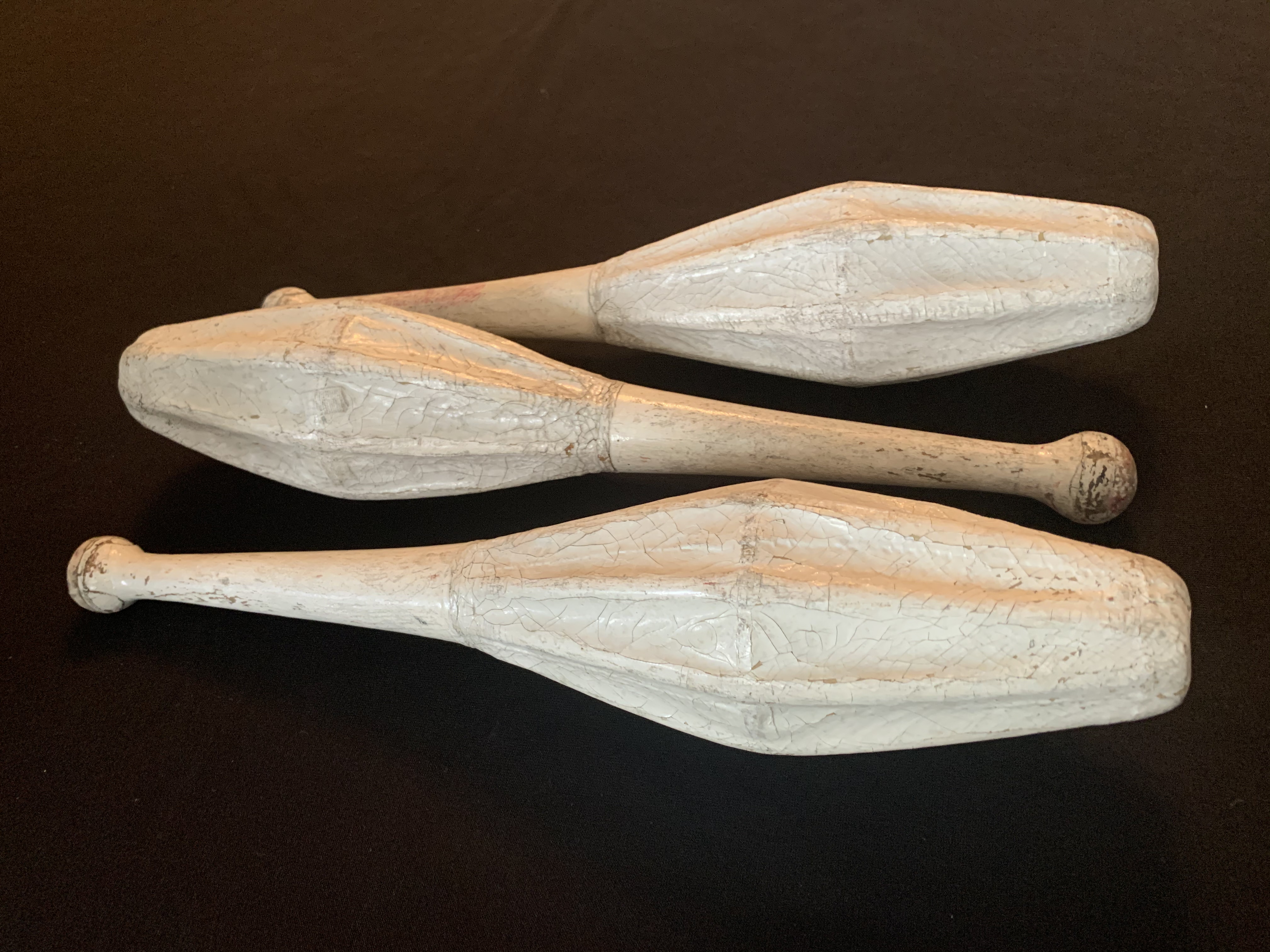 Here is another Ernest Montego club with metal ribs rather than wooden ones. 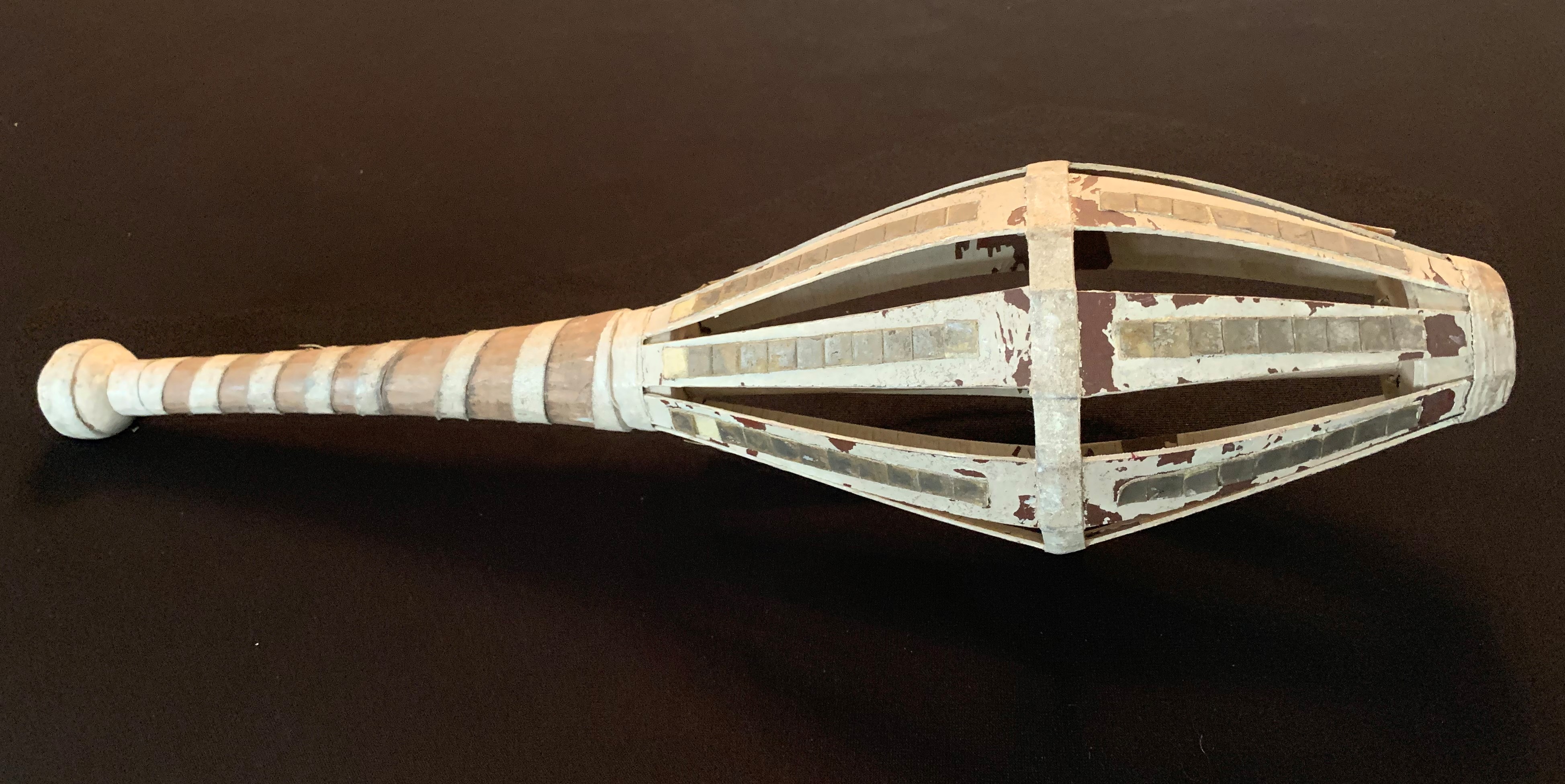 Below is a skeleton club used by Mitica Virjoago when he became one of the first modern jugglers to do 7 clubs.

The clubs below are cherry and bamboo skeleton clubs made by David Booth of Eugene, Oregon. They were sold at juggling conventions in the mid 1970s. 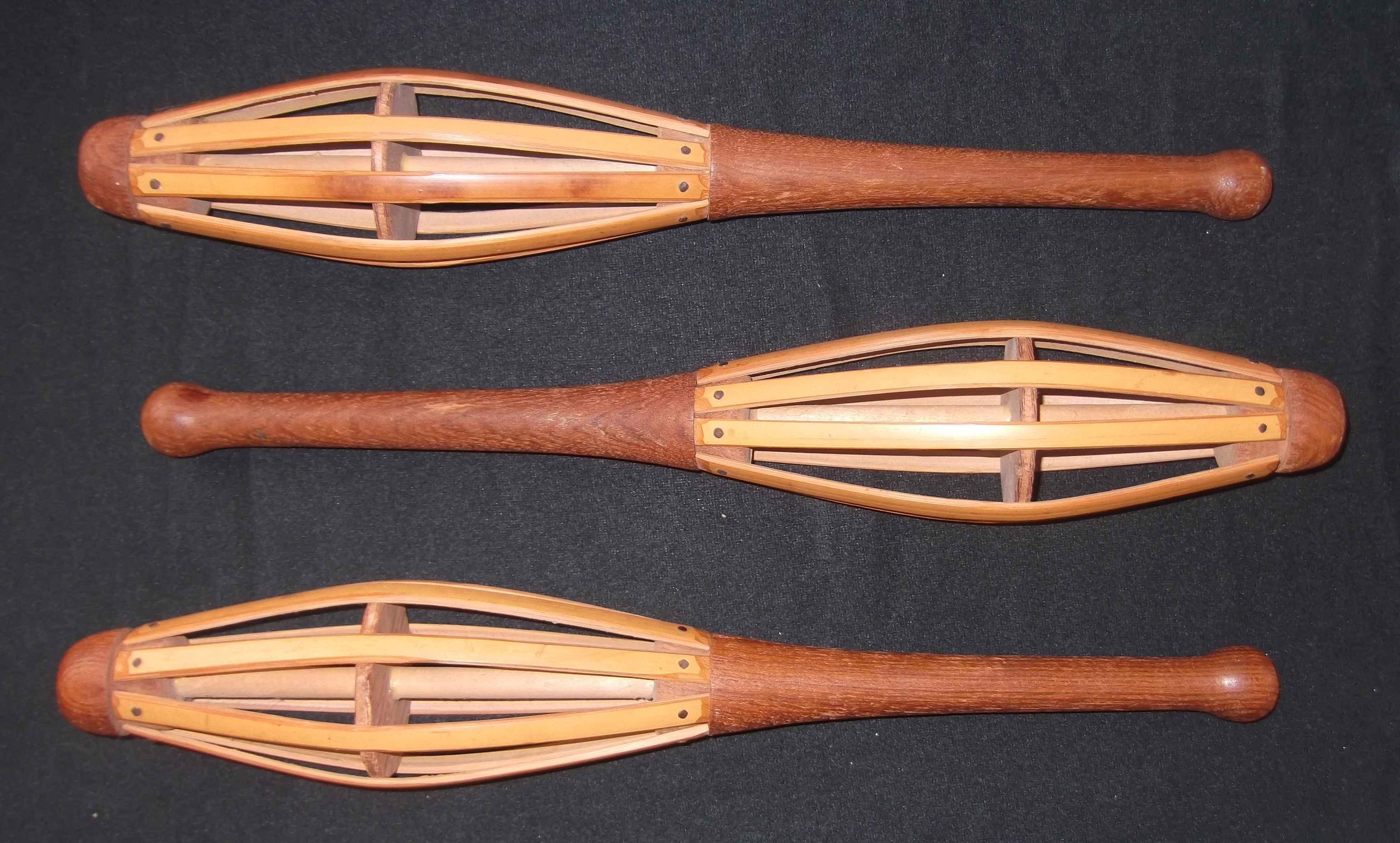 The clubs shown below are three Harry Parker (Chicago, Illinois) ribbed skeleton clubs. You can see the internal construction on the left club. The outside covering is tape and foil.

The clubs shown below are Russian skeleton clubs from the 1960s that were donated by Hovey Burgess to the IJA archives.

This is a skeleton club made by Homer Stack in the 1960s. It has a shrink wrapped plastic covering.

The next club is a Vegas Club from the TAL Corporation, otherwise known as Thomas, Albert, and Larry Sikorsky. It has a six sided body covered in silver lamé material and is constructed with a wooden dowel, struts, internal disc, and end cap in the traditional “skeleton club” design. it was sold in the 1980s.

With the advent of modern plastic clubs, skeleton clubs mostly disappeared. They were still used by a few jugglers from Russia and Eastern Europe, but they have been quite rare.

Swiss juggler Eddy Carello Jr. has recently begun making skeleton clubs for resale after seeing some of Fudi’s clubs. You can see photos of his manufacturing process and finished clubs below.

More recently, Eddy has modified his design to have the handle and body shaft be one piece. This improves the balance of the clubs.

Eddy makes several models of clubs and can customize sets as well. I have some of Eddy’s clubs and have to say that they are quite well made. The biggest challenge could be getting used to wooden handles, but if you’re looking for something different, you can check out his Oldschool Juggling Clubs page on Facebook or contact him at eddy.carello@yahoo.de for more information.