There are few things one can be sure of in life, but one is that the St. Louis Jugglefest is always a rocking good time. And I’m not just saying that as the former festival director – as Wes Peden said, “It was fun.” Well, this year was no exception. St. Louis always attracts a great group of jugglers and maintains a high-quality performance matched by few other festivals.

This year, the performance was straight-up phenomenal. Jaw-dropping, you might say. Each act showcased both artistic and technical expertise. The show was split between several shorter acts and a headlining performance by Wes Peden. Throughout, Smirk kept the show moving in classy MC duo style. Smirk shaped the atmosphere of the show, keeping the mood light with their over-the-top characters and stupidly hilarious bits.

The St. Louis club kicked off the show with a clean multi-person act, featuring take-out combinations, big patterns, and solo exhibition. It was a “short and sweet” extract from a longer routine, and definitely left the audience wanting more. Next was Nathan Biggs-Penton – a young juggler who you should keep your eyes on. He has an innovative artistic style, incredible club balancing tricks, and the potential to become a really fantastic performer. Cate Flaherty then presented a beautiful act that merged hand-balancing and juggling in a way that I had never seen before. It was captivating to watch her smoothly execute strenuous hand-balancing while controlling several juggling balls trapped around her limbs. She seemed more comfortable on her hands than I am on my feet. (And I’ll bet I’m not the only one who went home that night and practiced handstands against a wall.) Kellin Quinn then presented his act that recently won him a gold medal at IJA Juniors. Needless to say, it was excellent. He manipulated a variety of objects, including square rings, an umbrella, a cane, and a top-hat, in addition to clubs and balls. His act was a completely new take on some traditional vaudeville tropes. It was impressive, but, more importantly, it was classy and tasteful.

Then came Wes Peden. In my book, his act was as good as it gets. He sauntered on-stage carrying more objects than even he can juggle, and proceeded to let most of them fall to the floor, leaving only five clubs flying between his hands in a clean cascade. He went on to perform complex and beautiful sequences that I can’t even begin to describe. He arranged and rearranged the objects on the stage, all the while executing incomprehensibly difficult sequences of juggling melded with mesmerizing movement. He would repeat certain tricks and sequences multiple times, demonstrating complete control over the actions and allowing the audience to process and deconstruct the movement. His sequences were even more fluid and natural than improvisation. Many times, I wished my brain had “replay” and “slow motion.” (I also wished I could spend 24 hours a day juggling until I could do any part of that routine)

If you are familiar with these performers, then you know how good of a show it was. If not, please go watch some videos because I know I can’t do them justice.

Wes Peden doing manipulations and much, much more.

Other highlights of the festival included a great set of workshops involving all of the performers, a strong vendor presence, and a satisfactorily raucous renegade show. I particularly enjoyed learning “3-Ball Starts/Juggling Methodology” with Wes and “Working with a Team” with Smirk. Another perk was that at any time during the fest, one could walk around the gym and see some truly mind-boggling juggling from top-notch jugglers. I saw jugglers working on 9 balls, 7 clubs, 5-club backcrosses, and all sorts of body throws, catches, and rolls. The obvious “low” of the festival was the gym space – or lack thereof, since the usual location cancelled last-minute. (we jugglers get no respect…) The club put together a mishmash of other spaces, which turned out much better than expected, with the occasional close quarters contributing to a more social atmosphere than you find at most juggling festivals. Workshops were in one area, the main gym in another, and the weather was pleasant enough that many jugglers chose to practice outdoors. For the last day of the festival, the club was able to obtain a fantastic gym space – a major upgrade from previous years. Many festival attendees are hoping that this space will be fully available for future festivals, and the organizers have assured us that they will try their best.

Overall, the festival was a classic regional festival at its best, complete with traditional free St. Louis peanut butter and jelly sandwiches and an outing to St. Louis’ City Museum. Big congratulations to Max Wasserman, Dylan Griggs, Chris Fairall, Danny Rose, Grace Kuo, and Sean Carney for all of their work. If you’ve been on the fence about making it out to a St. Louis Fest – DO IT! I can assure you that most of this year’s attendees will return expecting to have a blast.

The National Prestigious Society of Collegiate Jugglers filling the stage.

An Impressionistic Poem about the Festival Experience

This high concentration of jugglers and airborne objects broken only
at 10pm, when we cross campus for Renegade:
a lecture hall burlesque, with your host Bekah Smith,
who offers bananas and beer as reward for:
leaping through a mouse-trapped wheel of death,
rola-bola handstands,
laser pointer painting,
diabolo bedevilment,
a little ukulele,
club-passing with sweet dance moves,
creative ball juggling,
a clownish chorus line,
and who ends the show topless, tassel-twirling, unicycle-hopping
over a jumprope made from audience members’ bras.
Plus Grade-A heckling and accordion rendition of ‘Gin and Juice’
by Kate Petersen, our awesome Dachshund-devoted host,
who lets 7 jugglers share her apartment for the weekend,
and whose neighbour across the hall, Allan, hosts Kansas City jugglers,
making Friday’s post-Renegade party a floor-wide event! 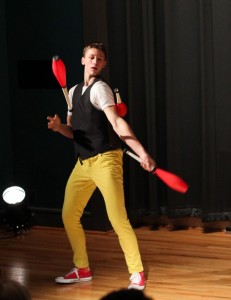 Nathan Biggs-Penton rocking out with clubs.

Saturday morning, back at the festival (with coffee),
the packed hall clears out a bit for Wes Peden’s popular
and challenging workshop on 3 ball starts, held in a room near
the irresistible Free Peanut Butter and Jelly Sandwich Table!
It’s a gorgeous late fall day: the grassy lawn attracts jugglers
wandering from the juggling rooms in search of open sprawl,
for a game of field ball, or a lesson in whip cracking
(a scene I imagine is all the more curious
to visitors on campus for ‘Parent Weekend’).

The Delmar Loop is full of fine food, and a bunch of us hit Ranoush
for tasty Middle Eastern dinner in an indoor tent,
before heading to an excellent show
hosted by Smirk, with their vaudevillian antics and high-waisted pants,
featuring
the National Prestigious Society of Collegiate Jugglers’ group passing,
Kellin Quinn’s surreal visuals,
Nathan Biggs-Penton’s club combos,
and Cate Flaherty’s fine balances.
Wes Peden walks onstage with a massive stack of props,
drops all while erupting into 5 club cascade- surprise
order from chaos- and proceeds to mesmerize
with a virtuosic set to a dreamy soundtrack.

Inspired, jugglers rush back to the gym,
or to the City Museum!
Open until midnight, an overgrown playground
of absurd, improbable structures, diverging and converging
pathways, and total visual over-stimulation.
We skin our knees crawling through a subterranean cave maze,
start a dodgeball fight with a group of Halloween zombies
lounging in the ball pit, spiral up stairs past a giant pipe organ
to chute down the 10 story slide, climb into the stripped cockpit
of a plane dangling like a loose tooth in a metal yawn over St Louis,
and hang at the Tiki bar juggling pepperoni sticks until closing
then return to campus for a boisterous frat-style
late-night kitchen party, complete with cheap beer,
a guy in a cow costume, and juggling in the living room.

Sunday morning, the festival moves to a big school gym,
with enough space for everyone to juggle happily.
Workshops are ongoing, and I try some fairly aerobic jumping
at Wes’ kickup class. We get in a good afternoon of juggling
before the fest packs up around 4pm, and folks head out
to linger at Fitz’s over burgers and giant rootbeer floats.
Hurricane Sandy’s battering the coast, and flights east
are cancelled, stranding some jugglers for the moment, in Missouri.

But I climb into Bruce’s van with a handful of others,
and we settle in for the ride, sleepily listening
to Halloween radio playlists on the night drive
up through rural Illinois, past empty fields
and red flashing lights, to Chicago.