In Part 1 of this article, I examined a wide array of nearly unbelievable tricks performed by Enrico Rastelli, Alexander Kiss, Ernest Montego, Alberto Sforzi, and several others. Response to that article was greater than just about any other piece I’ve written for eJuggle, so I’m glad to share even more of what I consider to be some of the greatest juggling tricks of all time.

Paul Conchas (born Paul Hutt) was probably the greatest of the heavyweight jugglers of the late nineteenth and earliest twentieth century. His most famous feat was balancing a cannon, complete with the carriage and wheels, on his forehead. For me, his most impressive trick was juggling six solid steel cannon balls.  He apparently demonstrated to the audience that these weighed 56 pounds (25.4 kilograms) each! This wasn’t just a staged trick for a photograph, but something he regularly performed. This sounds completely impossible, but then again, so do many of the tricks included in this series of articles.

Many jugglers, such as Enrico Rastelli, Rudy Cardenas, and Evgeni Biljauer mastered the skill of bouncing two balls on the head at the same time. As I mentioned in part 1 of this article, Alexander Kiss learned to juggle four sticks while heading two balls. However, two jugglers took head bouncing one step further. Both Paolo Piletto and Konstantin Nikolskij bounced three balls on their foreheads in performance.

Russian superstar Albert Petrovski was able to bounce a ball on his forehead while flashing ten rings in performance.

Anthony Gatto has succeeded in flashing 11 rings with a head bounce in practice. Gatto has also managed to run 7 clubs, 9 rings, and 9 balls while heading a ball, all which can be seen in the video below. The video also shows Anthony’s world record of qualifying 8 clubs!

Pavel Evsukevich has managed to flash 11 rings while balancing another ring on his forehead. See this and other great tricks below.

Combining a head balance and ball bounce was first done by Youri Borzykine from Ukraine, who bounced a ball on a platform located at the top of a pole that was balanced on his forehead. He performed this while juggling five large balls and walking on a large rolling globe.

Click here to see Valentino perform five rings with the ball bounce / pole balance near the end of the video.

At the beginning of the twentieth century Kathi Gultini demonstrated the unbelievable skill of balancing a couch on her head while juggling four couch cushions. Once again, this wasn’t just a photo opportunity. It was a well-known part of her act.

Many jugglers have combined juggling with playing musical instruments, but the greatest example of this probably belongs to Franco Piper. This early twentieth century performer was able to juggle four banjos and play them at the same time!

An extremely unique trick was performed by Bert Holt. He hung from a rope that was held in his teeth while juggling four sticks, balancing a bottle on his forehead, balancing a bottle on his foot, and spinning a ring on his other ankle. He also juggled six rings while spinning a ring on each ankle while swinging on the teeth-held rope. Unfortunately, Bert fell and broke his back when the rope broke during a performance, ending his career.

Many jugglers, such as Willy Jaeger and his daughter Jenny Jaeger, perfected multiple balances. Perhaps the most incredible example was that of Bruski, who balanced five poles with balls perched at the top of each while idling on a giraffe unicycle. Note that all five balances are “active” balances, not “static” balances using broad bottomed pedestals.

One of the most unbelievable combination tricks ever performed was achieved by Angel Bojiloff and is now done by his son, Angel Jr. It involves juggling three rings in one hand, spinning four ungimmicked plates with the other hand, spinning a ring on one ankle, and spinning another ring on a mouth stick, all while lying on a slack rope. Below is a picture of Angel Sr. doing the trick and a video of his son performing it.

Gentlemen jugglers such as Kara and Salerno performed many amazing feats, but one of their competitors, Charles Hera, achieved one particular trick that seems impossible. Kara would light a candle while it was flipped out of its candlestick before being caught again. Hera would flip seven candles out of a candelabra and catch them all back in place! Supposedly gentleman juggler Adanos later learned this same trick. 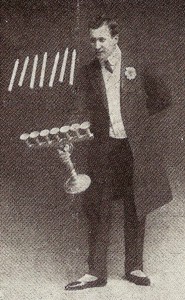 In Part 3 of this article, I’ll address some team juggling tricks as well as some more classic and modern solo tricks that are among the greatest ever accomplished.