In a previous article, I wrote about the history of 6 club solo juggling and even discussed the first performers to juggle 3, 4, and 5 clubs. In this article, we will examine the history of 7 club juggling.

The first person that we know who juggled 7 clubs was John Breen of the Breen Family Jugglers. You can read about this very interesting family by clicking here. Breen used basket weave clubs rather than the wooden clubs used by others of the time. John was the first juggler to perform 6 clubs, a 5 club shower, and 5 clubs with another balanced on his forehead. In practice, Breen juggled 7 clubs for at least 35 catches. John Breen passed away from tuberculosis in 1912 at the age of 21. You can see an advertisement of him performing 6 clubs below.

John P. Thomas was born in 1876 in Salt Lake City, Utah (USA). He was a self-taught juggler, as well as being a competitive boxer. In 1895, he opened an athletic school to train others in juggling and boxing. In 1898, John was offered a contract to tour with Ringling Brothers Circus as a juggler. While waiting for the contract term to begin, he worked part-time for the Royal Crystal Salt Co., a firm that extracted salt from the Great Salt Lake. On what was to be his last day of employment there, he assisted a crew that was assembling a train of salt cars. As John stepped between two cars to pull the coupling pin, the engineer did not see him and backed the train over his right leg, which had to be amputated below the knee.

His recovery took months, by which time the circus was long gone. John learned to walk again with an artificial leg and foot. John then took a full-time job with the salt company as compensation for the loss of his limb. He worked as a packer for the next fifty years before retiring in 1948. To supplement his income, he returned to juggling and boxing and his best performances in both fields were given after he lost his leg. John also performed under the stage names of Johnny Thomas and Jack Thomas. 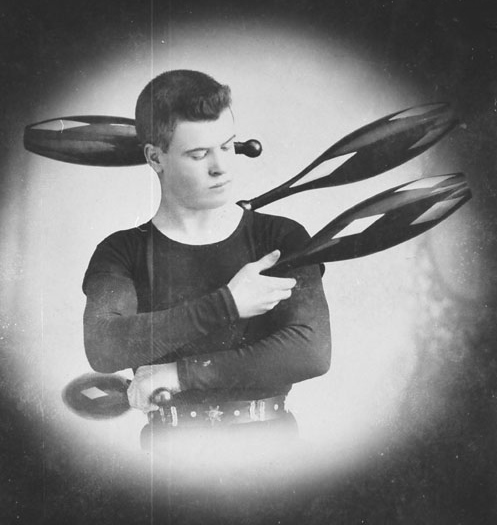 According to John’s daughter, Lenore, he was able to juggle five clubs and stop them in his hands, and could juggle seven clubs, catching five and letting two fall to the stage. His family believes John did this around 1904 and accomplished it by having his brother toss two of the clubs into the pattern. If true, this predates John Breen’s seven club juggling, which occurred around 1910. While the nature of the start and the unknown length of the juggle might not make this “official,” it is, nevertheless, quite impressive, especially if he used Van Wyck clubs to do so.

After Breen (and possibly John P. Thomas), over fifty years elapsed before another 7 club juggler came around. While it’s true that Enrico Rastelli performed 6 sticks and flashed 8 sticks in practice, he never worked with 7.

The next juggler to work with 7 clubs was Albert Pertrovski (1942 – 2003), whom you can read about by clicking here. Albert used thin clubs that resembled Rastelli’s sticks. He was listed in the 1963 Guinness Book of World Records for 7 clubs. You can see a photo of him below juggling 6 clubs. 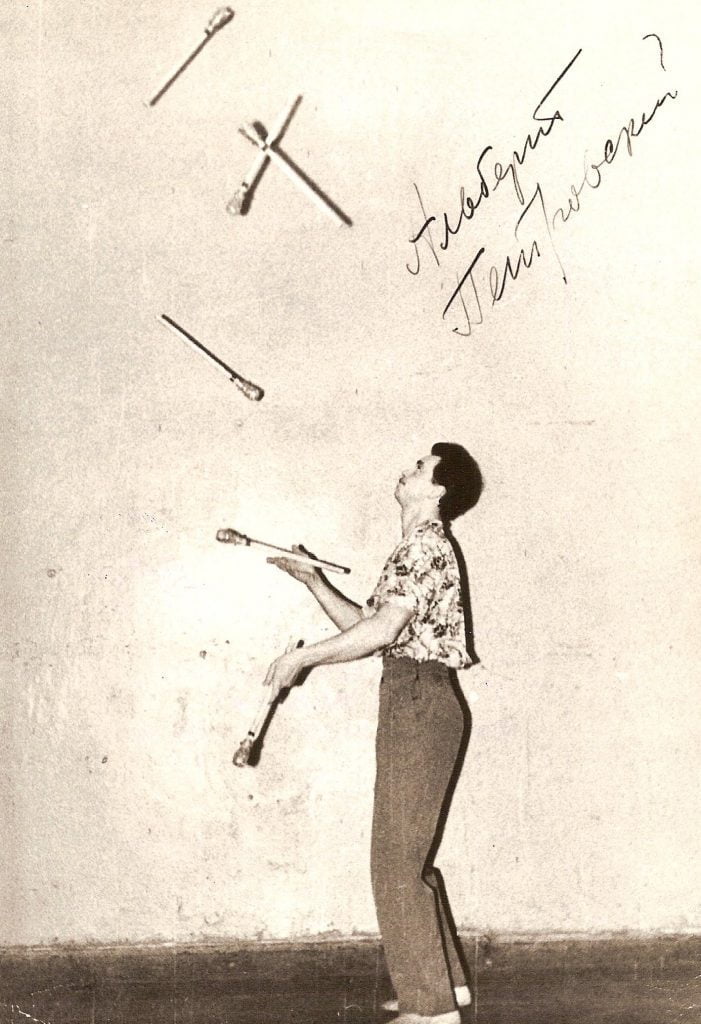 Czechoslovakian Jack Bremlov comes from a long line of jugglers. In 1973, he and Mitica Virjoago of Romania were performing together in a circus. They had both been practicing 7 clubs and decided to perform it at the same time while performing in separate rings. Bremlov would become more famous for his 7 club juggling, but they debuted the feat at the same time. This may have been the first time 7 clubs was ever performed in a show. 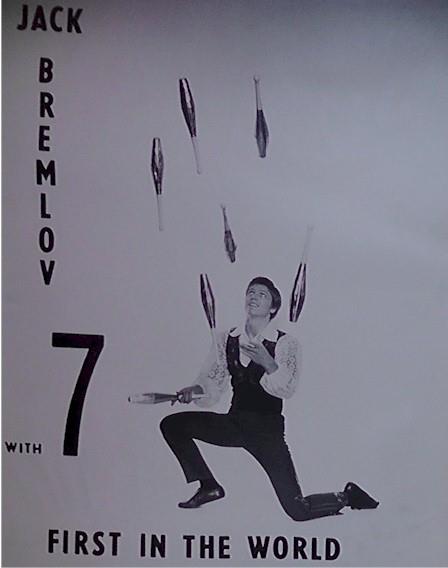 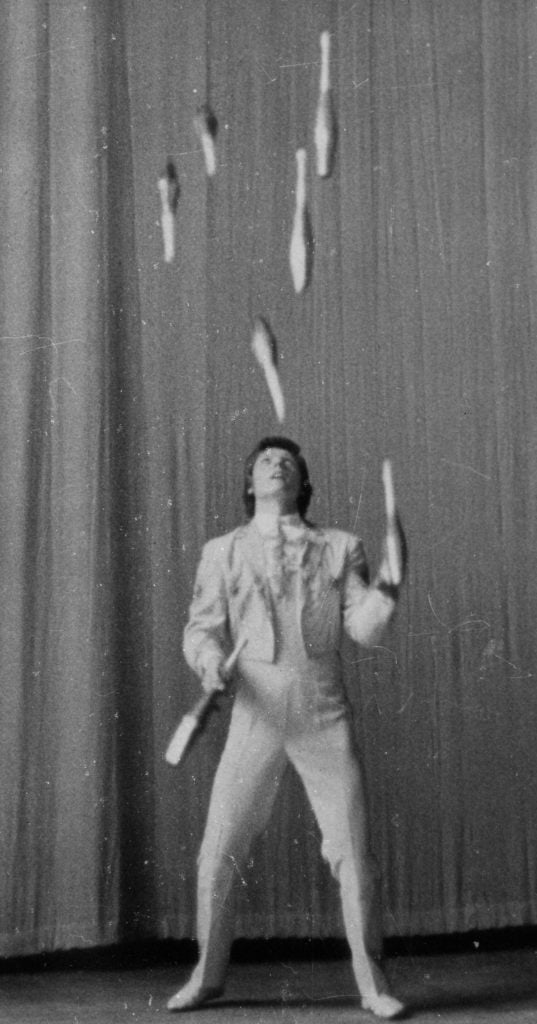 Sorin Munteanu (1960 – 2012) was a Romanian juggler who first juggled 7 clubs in 1976. He became famous for performing the skill, even doing so with a pole balance. 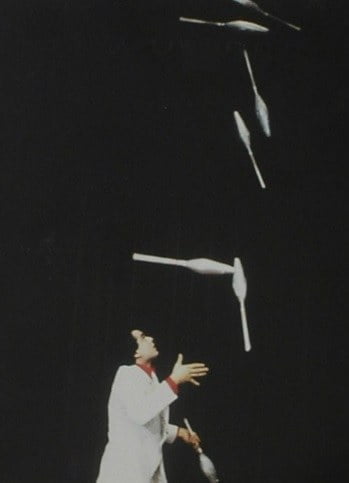 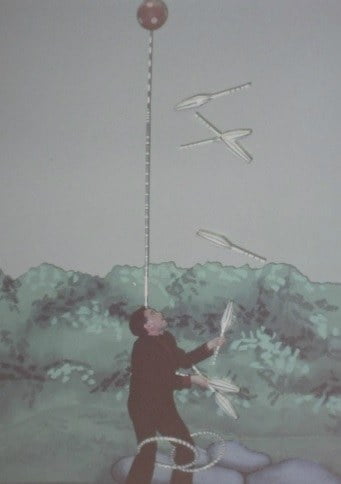 Demetrius Alcerese worked on 7 clubs in practice in the very early 1980s and demonstrated some good attempts at the 1982 IJA Convention.

Soviet superstar juggler Evgeni Biljauer occasionally performed 7 clubs in the early 1980s. You can click here to see him juggling 7 clubs in practice.

In 1984, Albert Lucas tied the Guinness world record of 7 clubs using fiberglass Stu Raynolds clubs. He attempted 7 clubs in the 1984 IJA Numbers Championships, but didn’t get close to a qualifying run. Lucas did demonstrate qualifying runs of 7 clubs using custom-made Dube European clubs at the 1996 IJA Convention, as you can see at the 1:43 mark of the video below.

Jian Ping Qian of the Qian Brothers trio performed 7 badminton rackets in the early and mid 1980s. You can see him get 13 catches of 7 rackets at the 5:10 mark of the following video.

Anthony Gatto debuted his 7 club juggling at the 1986 IJA Convention, demonstrating 44 catches during the Numbers Championship. You can see part of this run at the 22:07 mark of the video below.

Once Anthony Gatto showed that long runs of 7 clubs were possible, other jugglers started taking the challenge of duplicating the feat themselves. Jugglers such as Bruce Tiemann, Dana Tison, Stephan Gruss, Jason Garfield, Jeff Taveggia, Scott Sorensen, Anatoli Miagkostoupov, Viktor Filipovich, and Francoise Rochais followed suit within the next decade. Today, 7 club juggling is common, and tricks such as backcrosses, albert throws, 360s, and various siteswaps have been achieved. It’s quite different from when I started, as Gatto’s 1986 demonstration was the first time that myself and everyone else present had ever seen a run of 7 clubs.