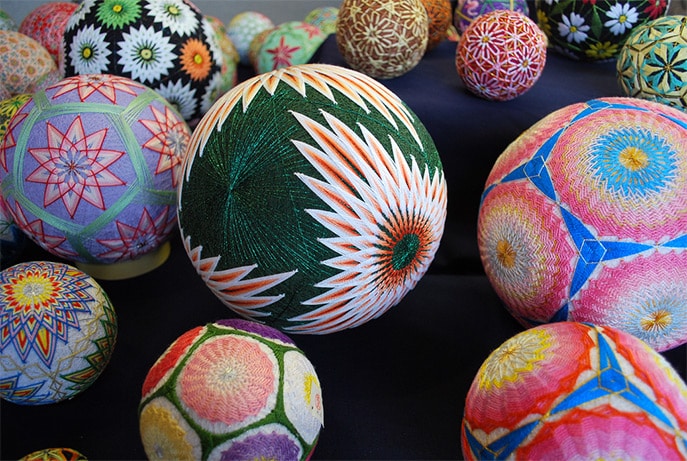 Balls and beanbags are the simplest of juggling props, yet virtually no research has been done regarding their development and history. The types of balls discussed in this article will be listed in the order of their first known historical reference. This does not mean that this was the actual order that they were in use, just the earliest recorded use. This list is also not intended to be exhaustive.

Ursus (53-117 A. D.), a Roman citizen, claimed on his grave inscription to have been the first person to juggle using glass balls. It is likely that this was not a reference to standard toss juggling, but to the skill of bouncing and catching a single ball on various body parts without dropping. Massimiliano Truzzi was famous for using glass fish bowls in place of air-filled balls.

Truzzi’s best known use of them was to balance one on his foot and another on a mouth stick and then switch the two without breaking them. You can see a photo of this trick below. 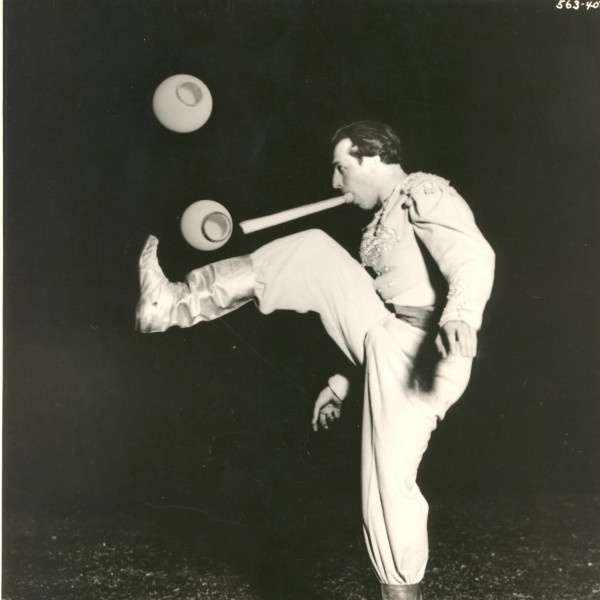 Fruits and nuts were surely some of the earliest objects to be juggled. The first known reference to such objects being used for juggling dates from the 5th Century AD. The Irish hero Cuchulainn is described as “keeping nine apples, and his shield, and his sword in the air, that none of them fell to the ground.” We know that apples were juggled in the mid-1700s by “L’incomparable Dupuis,” who performed with three pieces of the fruit in his act. In 1773, Captain James Cook reported seeing the women of the Pacific Islands that make up Tonga juggle large numbers of tui tui nuts. The tradition of Tongan juggling is thought to go back quite far and is still practiced today using tui tui nuts and oranges. Tongan women only juggle in a shower, but some can do at least seven nuts at one time with legends of women juggling up to eleven. The following illustration and photos show the use of tui tui nuts by Tongan jugglers. 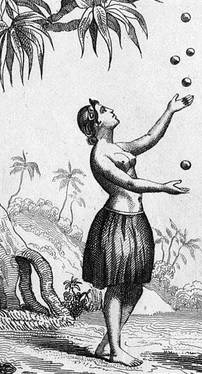 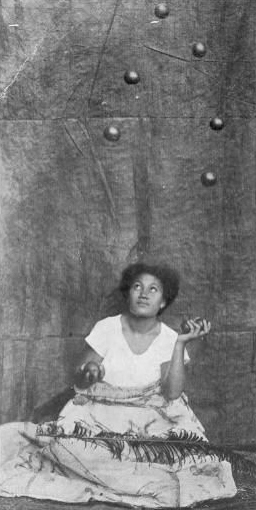 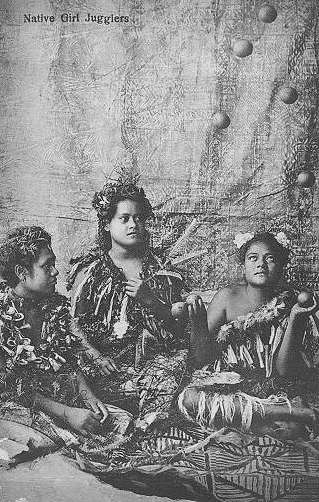 Rattan balls have been used by performers in Southeast Asia for around 1,500 years. They were originally used to entertain Burmese royalty, with performers kicking and balancing the balls in skillful ways. Over time, these skills branched off into various sports such as chinlone, which resembles Western hacky sack, and sepak takraw, which resembles volleyball but without the use of the hands and arms.

The first jugglers that I’m aware of who demonstrated the use of these skills with rattan balls in the West were Moung Toon in the 1890s and Maung Law Paw in the 1920s. 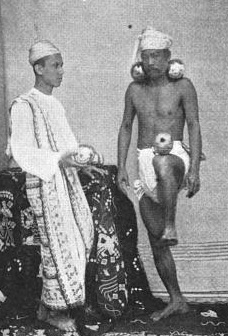 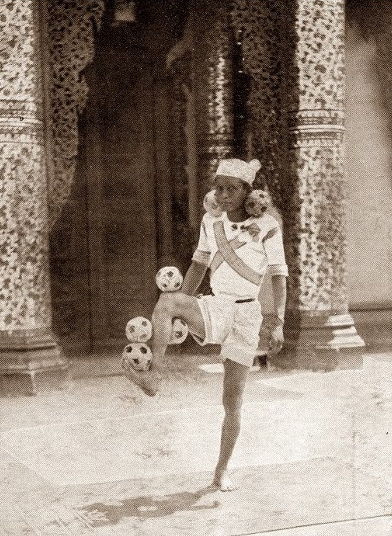 The earliest known reference to juggling balls made of metal is from the story “The Destruction of Dí¡ Derga’s Hostel.” This story tells of Tulchinne, the royal juggler of King Conaire of Ireland. In the tale, it is said that Tulchinne juggled nine balls of gold. The earliest manuscript of the story dates from 1100 AD, but it is believed that the tale is at least several centuries older. Mooty and Medua Samme juggled with brass balls in the early 1800s. 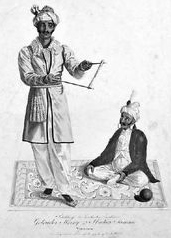 Karl Rappo is believed to be the first performer to juggle cannon balls, doing so in the 1820s, but Indian jugglers may have done this earlier. 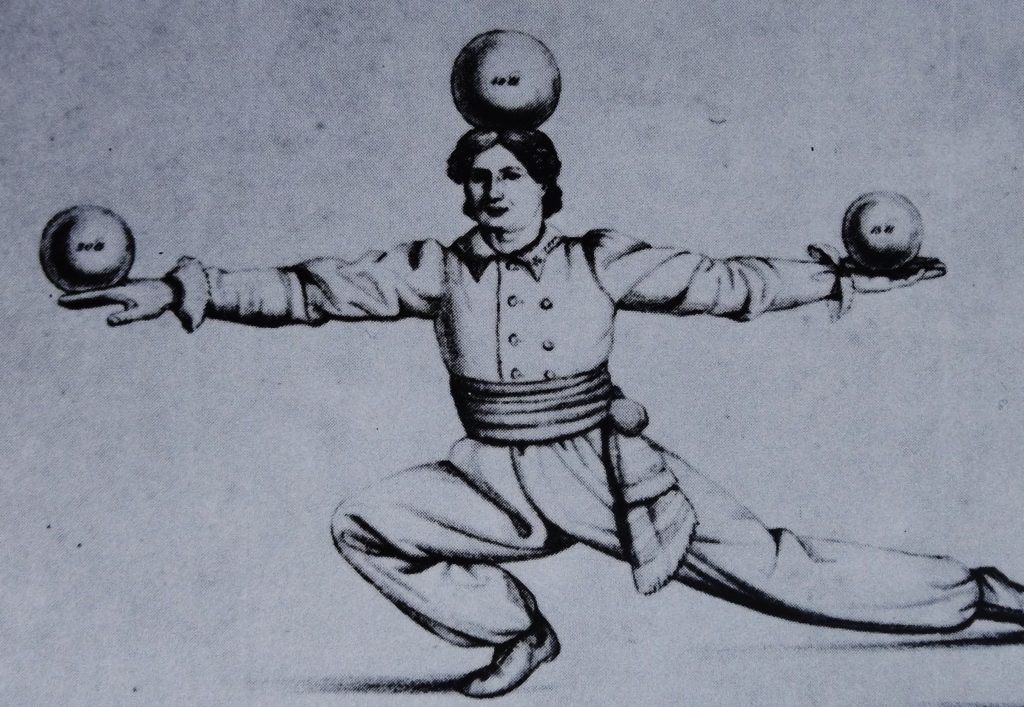 Otedama, the Japanese beanbag juggling game, was transmitted from China to Japan around 710 AD. 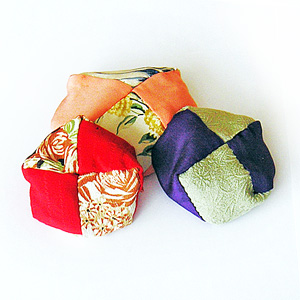 Beanbags consisting of many pebbles wrapped in linen and tied with cloth did exist in ancient Egypt, but it’s unknown if these were used for juggling. 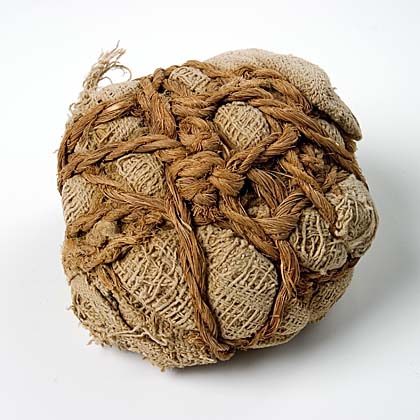 The photo below shows some medieval-era beanbags that are made very similar to modern juggling beanbags. 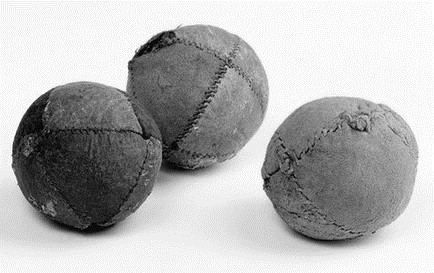 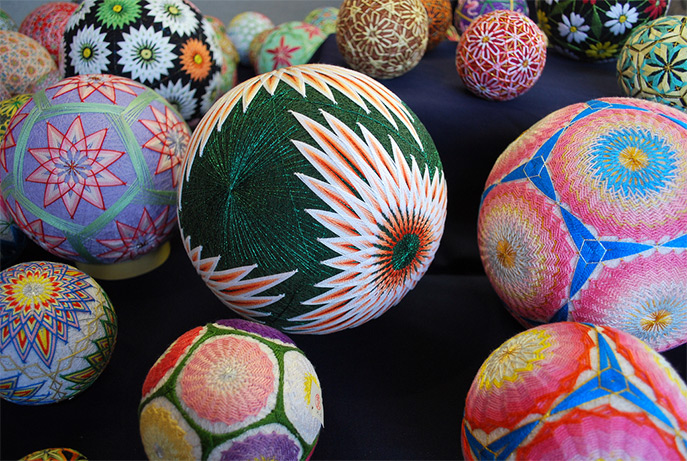 The use of wooden balls by jugglers surely goes back quite far, but the earliest use that I can find reference to was a statement from the 1600s that Tongan jugglers sometimes substituted wooden balls for the typical nuts that they juggled. Ellis Stanyon sold wooden balls in 1906. In the 1920s, Enrico Rastelli used small wooden balls covered in cloth for his ten ball flashes. A more modern juggler that used wooden balls was Pepito Alvarez. 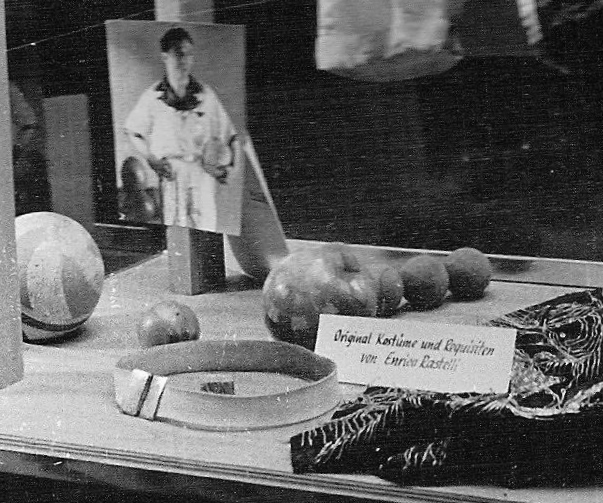 Rastelli’s small balls and other props

The first juggler known to use billiard balls was Cinquevalli, who first used them in the 1880s. They were very popular props for gentleman jugglers such as Kara and Salerno and those who specialized in billiard table acts, such as Asra. 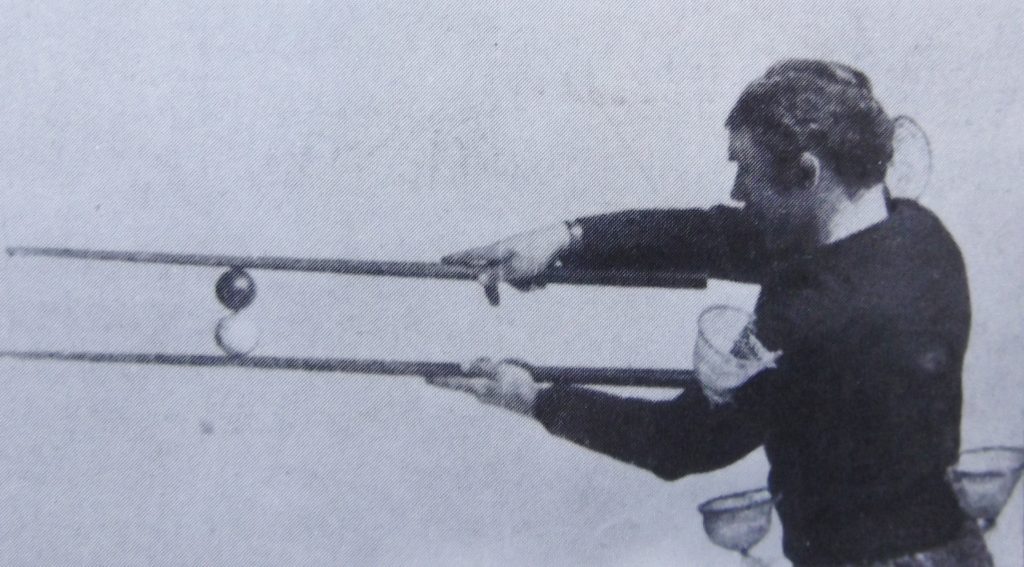 The first footballs / soccer balls made with rubber bladders were introduced in 1855. Before that time, inflated animal bladders were used in some balls, but they were rarely round and not very useful for jugglers. It is often stated that Enrico Rastelli was the first juggler to utilize inflated balls into his performances, but this was not the case. The following illustration, which was published in 1891, shows D’Alvini doing what appears to be a double ball stack spin. It’s hard for me to imagine this being done with something other than an inflated ball on the bottom. We also know that ball spinning with inflated balls was included in the juggling chapter of William Hilliar’s Modern Magician’s Hand Book, which was published in 1902, a decade before Rastelli began his juggling career. 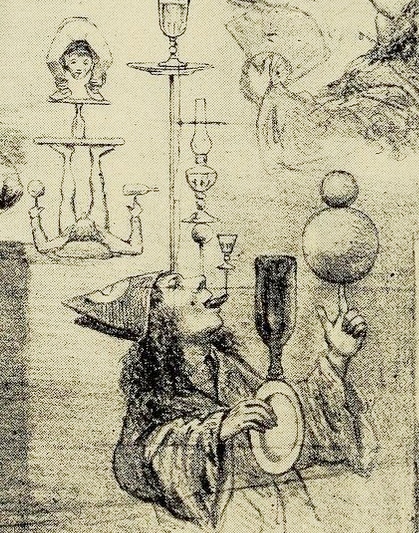 The earliest use of rubber bounce balls by jugglers dates back to the late 1880s, when Russian juggler L. A. Street and others began to use them in their acts. Edward Van Wyck sold “bounding balls” in his 1900 catalog. 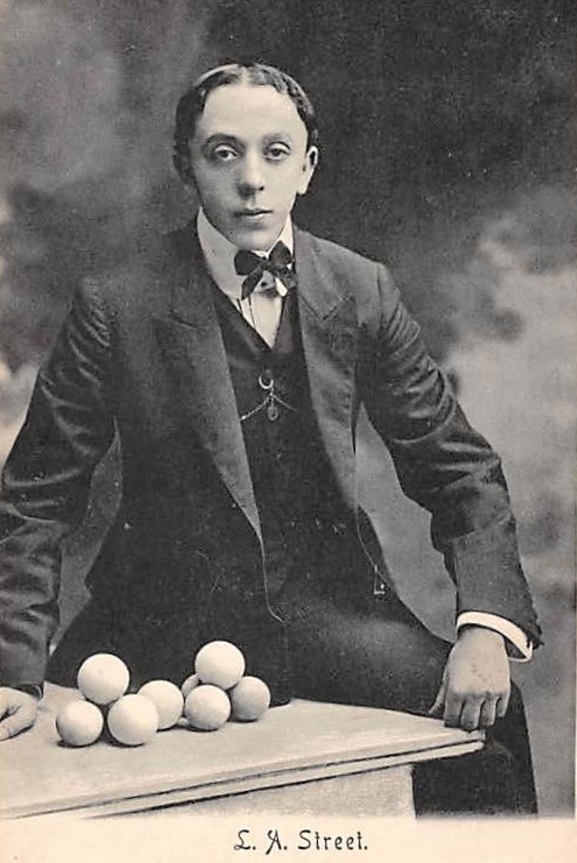 Gentleman juggler Kara used tennis balls for bouncing in the late 1890s. Many other jugglers have used them, including Eric Philmore, who bounce juggled six of them using two tennis rackets. 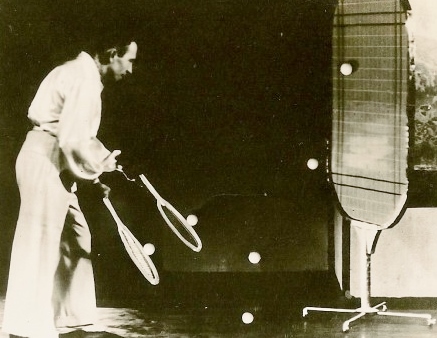 You might not think of bubbles as possible juggling props, but bubbles were used by Clara Braatz, Ollie and April Young, and the LaTours in their juggling acts in the 1890s and early 1900s. Some of the bubbles used were soap bubbles and others were similar to gum arabic. 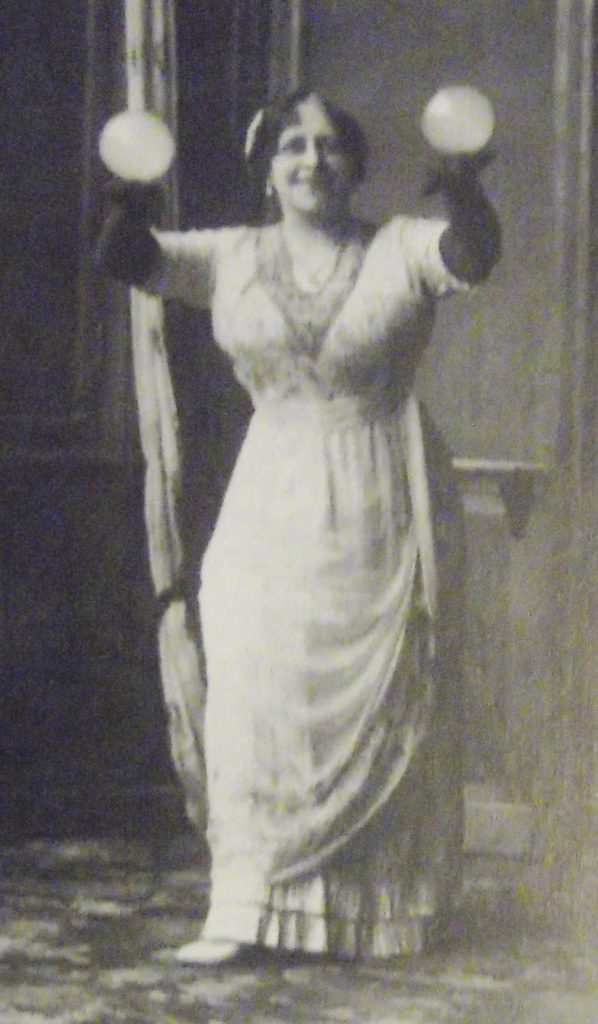 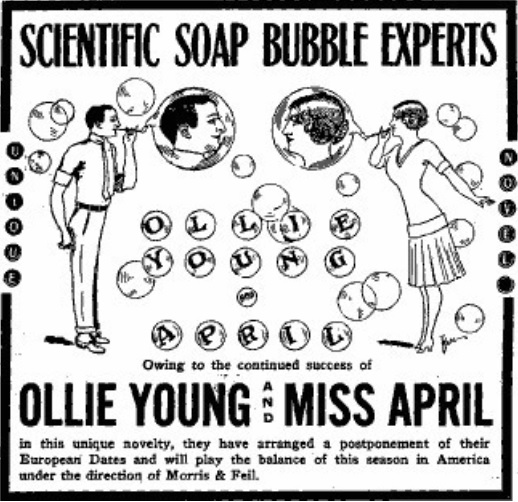 In his 1907 book Games of the North American Indians, Stewart Culin reports the details of many different Native North American cultures using rocks for juggling. Likewise, other similar cultures are reported using balls of clay. Current juggler Jimmy Gonzalez uses clay in his act, creating different numbers of balls throughout the performance. The idea of using clay in this manner originated with Erik Aberg.

Fairly dense foam balls were used for juggling at least as early as 1949, as with the Floyd Brothers set shown in the following photo. 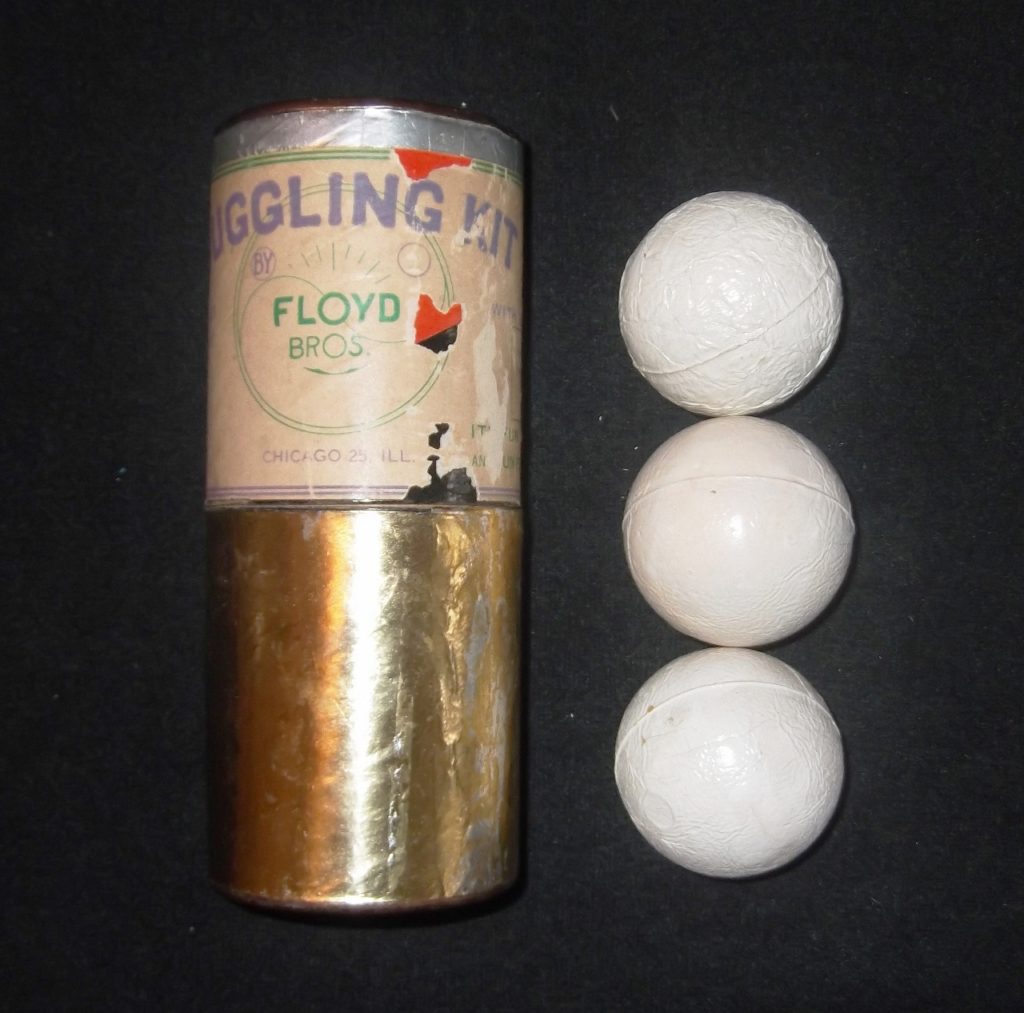 Silicone bounce balls for juggling first appeared in the early 1970s. They were first used by Dutch juggler Eddie Rosto, who had magic prop maker Frank Radtke of the House of Fakini make a juggling version of Frank’s silicone multiplying golf balls. Soon jugglers such as Gil Dova and Dick Franco started using them and such balls have been the top choice of ball bounce jugglers ever since.

The balls currently known as “Russian balls” were actually invented in Ukraine by Mikhail Rudenko in 1971. These balls are hard sided plastic balls partially filled with sand, semolina, or similar substances. They are now a very popular type of ball used all over the world.

Stage balls are semi-soft sided, hollow, vinyl balls made for juggling. They are made to have very little bounce and were first introduced by Dube in the early 1980s.

“Hybrid ball” is a term that has been given to soft-sided balls that are filled with various substances so as to behave like a beanbag. Fillers can included sand, rice, sugar, liquid silicone, metal pellets, and water. The earliest such juggling balls that I’m aware of are Exerballs, heavyweight balls made for jugglers to exercise with. They were first introduced in the late 1980s.

Clear acrylic balls were first used for juggling, especially for contact juggling, in the 1980s, due to the influence of Michael Moschen. They have been a popular prop ever since.

The first retail fire juggling balls were introduced in 1992 by Fyrefli of the UK. 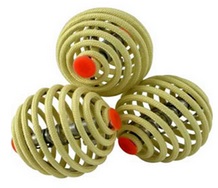 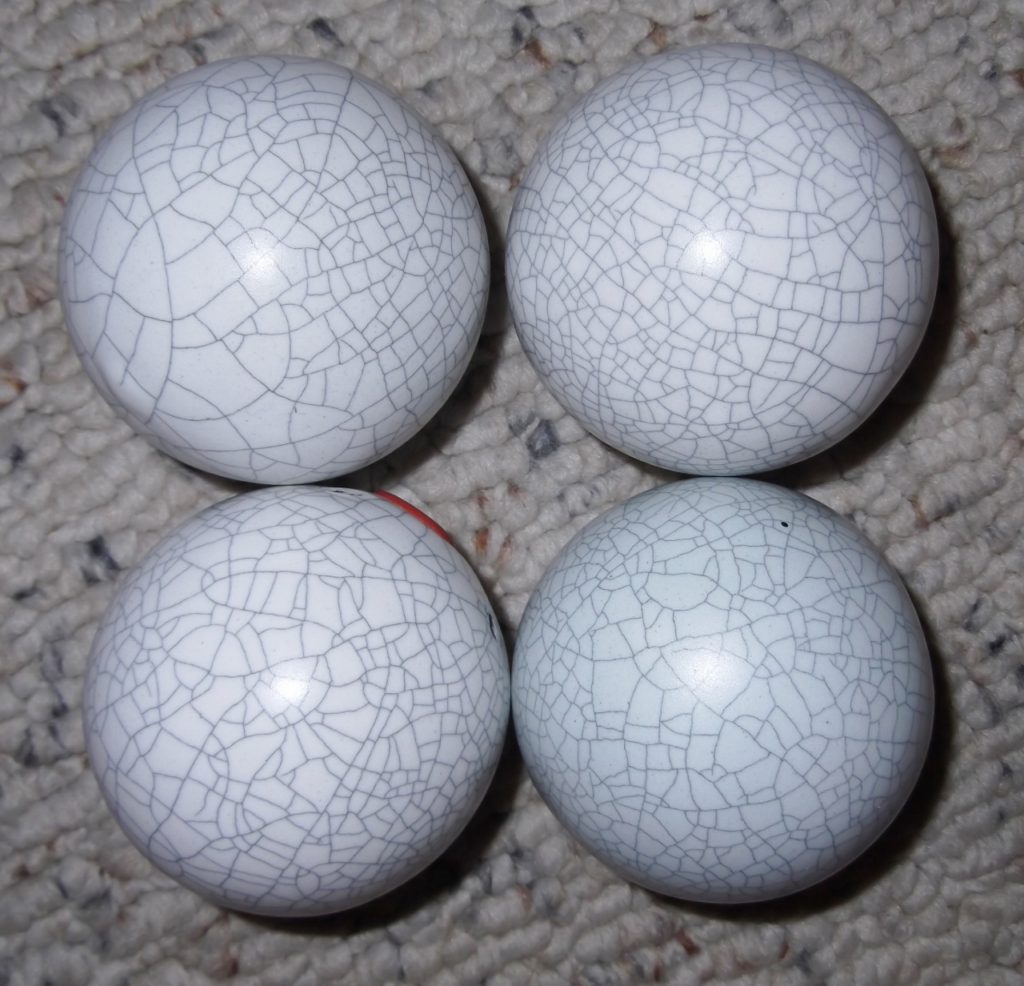