It was another German gentleman juggler, Charles Hera (1881-1931), who invented what is now known as the Candelabra Trick. This trick involves flipping multiple candles out of a candelabra with many branches on it. Hera performed the trick using seven candles, as you can see in the following two photographs.

As you might imagine, this is a remarkably difficult trick. There are many ways that the trick can go wrong. The fact that very few other jugglers took on the challenge of learning this feat testifies to the difficulty of the trick. However, those that did managed to make the trick even more difficult.

One such imitator was famed gentleman juggler Felix Adanos (1905-1991). As you can see in the following two images, Adanos flipped eight candles and caught them back in the candelabra.

The French juggling troupe The Mongadors featured one member who flipped and caught twelve candles.

The Mongadors also featured the trick of flipping three candles from one candelabra to another candelabra.

Little-known juggler and magician Gy Coross could apparently perform the trick with either hand.

The king of the Candelabra Trick was most likely the second person to do the trick, Ferry Mader (1884-1971). Mader flipped up to twenty candles and caught them.

Ferry Mader and his daughter

The trick was apparently gone from any performer’s repertoire by the 1940s, but it was included in the book The Art of Juggling by Nikolai Ernestowitsch Bauman, which was published in 1962. 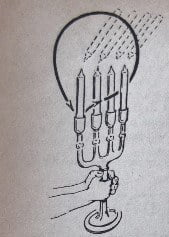 In 2017, I included the trick in one of my Dream Trick Challenge articles. No one submitted a video attempting it, so I decided to give it a try. Below is my best result. Right after getting this, one of the funnels broke in half and the prop was done.

As I quickly discovered, the candelabra trick is very difficult. I doubt that any performer will take on the challenge of learning it for their act any time soon.