Jay Green (born Gerald Greenberg) is an American juggler best known for the innovative props he has created, including the first modern, multi-piece club with a cushioned handle and foam knob and end cap. In Part 1, we examined Jay’s historic clubs. Now let’s take a look at his other innovative props, almost all of which include Jay’s iconic prismatic decorations.

Jay Green with his history-making clubs

Jay Green was the first person to create a plastic, break apart devil stick. You can see two examples of these devil sticks from the Museum of Juggling History below. 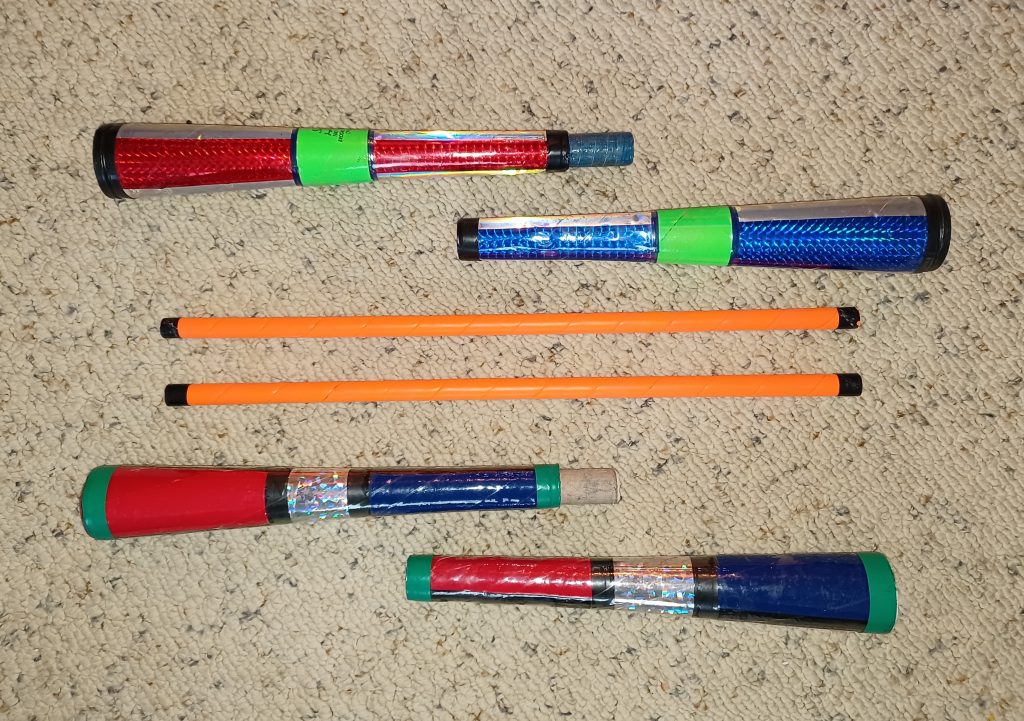 One of Jay Green’s most recognizable creations are his large diabolos. If anyone has one of these they’d be willing to part with, the Museum of Juggling History would love to have one.

One of the most sought-after of Jay Green’s creations are his color change rings. They are prismatic silver on one side and are multi-color on the other side, with bumpers on both the inside and outside edges.

Jay Green juggling his Supersonic rings, with one showing the multi-color side

Jay created and sold soft-sided bean balls, like the one below.

Another one of Jay Green’s most recognizable creations are his spinning basins. These were made by combining a plastic spinning plate with a plastic basin, making for a very visual prop.

Jay Green created and sold a plastic cone with a rounded metal tip and an elastic strap to wear on the juggler’s head and spin a ball on. You can see it in the previous photo and the following ones as well.

I use one of Jay’s cones for the Horn and Rings routine.

Jay Green has made and sold double-walled spinning balls.

Parasol with wheels in the center

Jay Green made spinning plates that had a frisbee attached to the top for additional weight.

Jay Green made torches of various types, including standard torches as well as torches that have cones that cover the wick end. These could be taped to the body of the torch, resulting in a club. The cone also protected other props from the torch residue. You can see both kinds below, from a catalog and from the Museum of Juggling History.

You can see Jay use many of his iconic props in the following video.