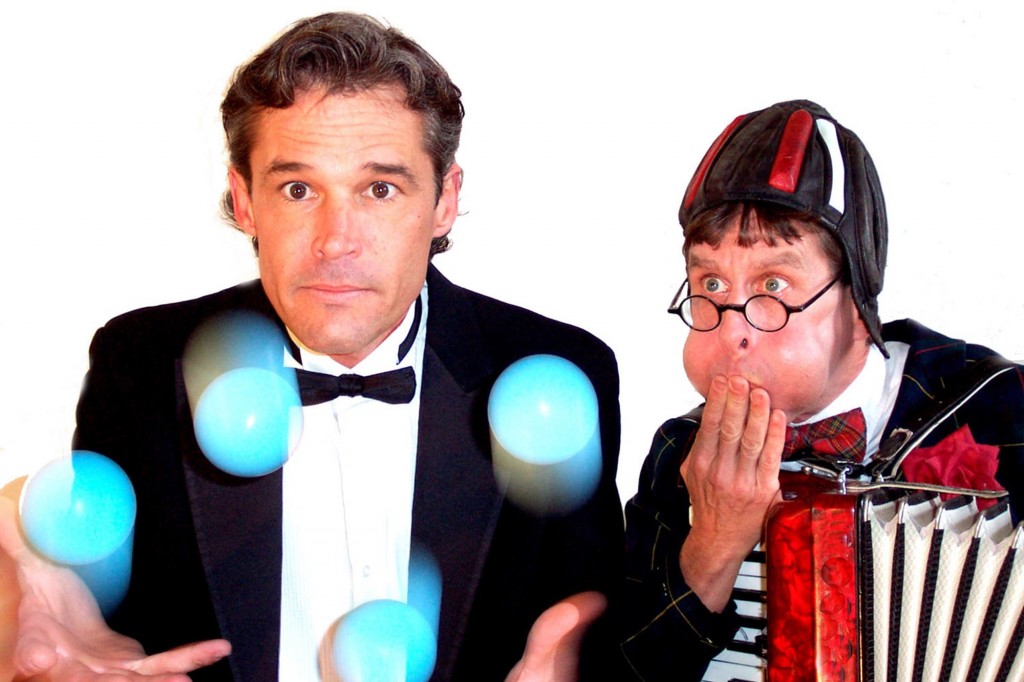 Woodhead on the right with Waldo.

To watch Mark “Woody” Keppel on stage today is to see a master of his craft. Woodhead is unpredictable, hilarious, charming and above all exceedingly talented. He throws himself, sometimes literally, with reckless abandon into his character and you would never guess that he froze on stage in his very first public appearance. If you don’t know Woody, stop reading and go watch his work at with both Waldo and Wells at: http://www.youtube.com/watch?v=XBPFwFWfpWo and http://www.youtube.com/watch?v=vNjCMPVUTQI. You’ll get a clear idea of Woody’s talent with juggling, music, and commanding the stage. With Woody, it’s not about the skill – although he’s got tons of skills – it’s about the character, having fun, and bringing the audience along for the ride. And they go along for that wild ride with him and leave always wanting more! 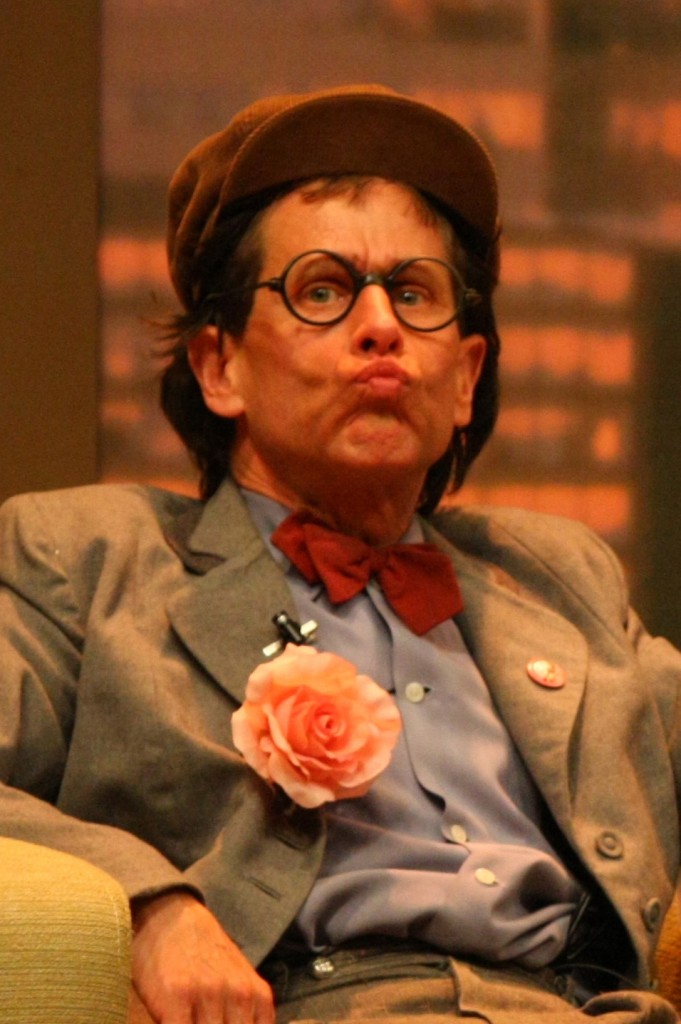 Growing up, all his older sisters took piano lessons, so he just followed in their footsteps. After a while his mother and teacher insisted that he also do the recital at the Upper School. He was seven years old and his mother dressed him in shorts, a white shirt, and a bow tie. In what has become typically Woodhead fashion, he was waiting for his turn on stage playing with a ball point pen when it exploded ink all over his white shirt. There was no time to change and he was ushered out on to the stage. The first few passages went well and then he missed a couple of notes. Mark stopped. He couldn’t remember where he was in the song, so he started over again, and then it happened again, and again until he finally just stopped altogether. He was in a complete panic and froze on stage. He had to be pried off the piano bench and practically carried off stage. Emotionally scarred at seven years of age, young Mark swore he would never perform in public again.

We all have his love of music and teenage male hormones to thank that he is the performer he is today. Winning the affections of a young girl in high school, who had a thing for Neil Young, convinced Mark to get past his fear and to perform again. With guitar in hand and some Neil Young songs memorized, he set out to win the affections of his high school crush. Overcoming his fear of performing and winning the attention of that young girl was the moment Woodhead describes as discovering his power. He could play music and he could entertain and he could win an audience over. After high school he went on to Virginia Commonwealth University where he majored in music. After college, Woody went on to start a band and launch his performing career in the studio, on stage, and in films. 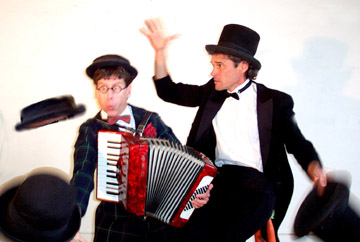 During this time while he was performing in the band, Woody had this feeling that there might be more to performing and being on stage than music. His sister happened to be dating Bob Berky, clown/musician. As Woody describes it: “When I saw him perform I was just mesmerized.” Through Bob, Woody saw what performing could be for him. Not long after this discovery Woody attended a training program in Maine taught by Bob Berky and Fred Garbo. Every day they would train, write and perform sketches, and very importantly, receive critiques of their work. In the mornings, Garbo would teach gymnastics and tumbling. This part of the program was a struggle for Woody. The combination of trying to keep up with the gymnastics and seeing all the skill of the other performers there completely intimidated Woody. By the time juggling was introduced to the group, he wouldn’t even try. Feeling more than a little overwhelmed, Woody skipped the morning gymnastics session, found a canoe, and paddled out into the middle of the lake. That is where the inspiration for the character Woodhead appeared. Woody created a sketch to parody his Algebra II teacher. Pulling on this teacher’s sour demeanor… ”This will be the happiest time of your life, being in high school, it’s never going to get any better than this!” and his goal of having everyone of his students to fail (at least from Woody’s perspective) so they would have to go to summer school, Woody created his sketch. He waited to perform his sketch until the third week. Despite feeling really nervous and unsure about performing, he unleashed his sketch to make a mockery of his teacher in front of these skilled performers. Woody threw himself into the character and took the stage. It was a howling success! Woody says he remembers people coming up to him after saying they really enjoyed his work and thinking “My Work? I don’t have any work; I just did this one sketch.” But that success, and discovering Woodhead in the woods of Maine, are the foundation for his performing to this day. 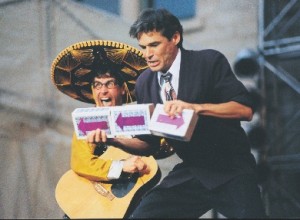 Woody launched has performing career as a solo artist and by the following winter he joined other performers making the street performing rounds in New Orleans. That’s where he first saw Paul Burke (aka Waldo). It wasn’t an instant connection. In fact Paul wasn’t even all that interested in talking to Mark. As fate would have it though, they both unknowingly bummed a ride to Key West from the same person. During that 14 hour car ride they began to talk and develop material. When they got out of the car in Key West they had become the performing team of Waldo and Woodhead. That fateful ride was the birth of a great performing team that went on to win awards and perform across the globe. For an excellent and in depth description of this unforgettable team see the article The Comedy Juggling of Waldo & Woodhead by Viveca Gardiner in the July/August 2002 Edition of Juggle Magazine or you can go to http://www.waldowoodhead.com/juggler_pg1.html to read the article. They spent the next month in Key West performing and avoiding the police. It was a hard month and they found that their chemistry on stage was gold but that off stage they just didn’t work well together. After a month they went their separate ways with Waldo going to Paris to be in a theatrical production of Barnum while Woody headed to Boston to work with the Opera Company. They didn’t hook back up for another four years. During all that time though Woody kept thinking this guy was great and that together they would be a terrific act. Again, as if by fate they were being drawn together, they both attended a Tony Montenero workshop in 1984. It was over the five weeks of training that they put together much of the show that they continue to do today.

COMMITTING TO THE CHARACTER

Woody on committing to the character: “You have to because if there are any leaks, you’re in trouble. If they catch you acting, you’re dead. It’s survival. It’s all or nothing.” 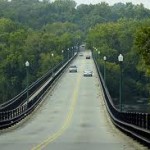 Early one morning in Richmond, VA a 20 year old Mark woke up in a warehouse where the night before he had attended a party. He now found himself alone, without a car or money to find transportation home. He was left with one option and that was to walk through the scary neighborhoods at 4 a.m. Crossing the Nickel Bridge, Mark looks up to see a gang of teenagers walking toward him. As he describes it they had a look of intent to mess you up all over their faces. Faced with the option of jumping the 150 feet down to the water or facing these would be assailants’ Mark gave serious consideration to the jump. In that moment it hit him that the only chance he had was to act like a complete lunatic. With complete and utter commitment, Mark abandoned himself to his character. The gang took a look at what was going on and crossed back to the other side of the bridge and kept walking. Mark never looked back.

WoodHead: “The lesson of really believing it yourself and committing to the character is carried over to every performance to this day. Before each show I build in time to get out of the Mark perspective and into that looney Woodhead mindset.”

Woody’s thoughts on performances that could have been better: “What I’m learning is to not take offense or self-afflicted punishment for it. If you’re not prepared, that’s what usually get you. If you are prepared you might not always get them, but you do your best and when they are there to do their part, too, it all comes together wonderfully.”

In addition to his performing with Waldo (Waldo & Woodhead) or Henrik Bothe (Wells & Woodhead), Woody also performs solo as part of the Hokum Brothers in and around where he lives in Vermont. Here is a link to their music video “Corn” on YouTube: http://www.youtube.com/watch?v=Nyia7RwF0nM

His next big project is another feature film to be shot in Vermont in 2013.

Here is a list of web sites where you can find out more about Woody, where he is performing, and his projects:

Don’t forget to listen in as Ted interviews Woody about his performing and juggling:

Speaker and trainer in the areas of leadership, supervision and team building since 1982. Juggler and performer since 1994. Doctorate in Educational Leadership and Policy Studies from The University of Vermont. Author of the book Little Blue Penguins: Tales for Making the Transition to Leadership. Performed at the 1st Niagara Rochester Fringe Festivals in 2012 & 2013, the Waterbury (VT) Comedy Festival from 2009 to 2011 and the 33rd RIT Spring Juggle-In in 2010. Winner of the 5 ball endurance and best trick at the 2004 Cornell University Big Red Juggling Festival.