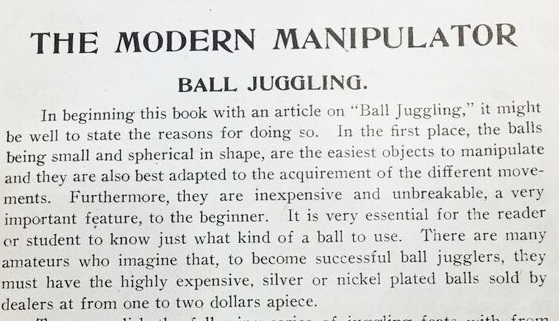 I have a very good library of juggling books, including many volumes that are quite old. Recently I was looking over an old bibliography of juggling books and noticed a couple that I wasn’t aware of. One of these was a book from 1910 called The Modern Manipulator by Carl Martell. I contacted my fellow juggling historian Erik Aberg and asked if he had the book. He didn’t, so I began to search online for any libraries that had it. I found copies at three libraries in the USA and contacted some jugglers living near Philidelphia, PA, the location of one of the copies. Steve Swayngim agreed to go to the Parkway Central Library and photograph the book for my research. The book is no longer under copyright, so publishing it here is permitted. Strangely enough, the book contains no illustrations for any of the tricks. It also contains some non-juggling related magic tricks. Below are the juggling related routines from the book. Some are quite rare and possibly unique. Thanks to Steve Swayngim for doing the work of taking these photos.

Several months after getting the photos from Steve, I received two copies of this book when my brother and I purchased the Paul Bachman collection for the Museum of Juggling History. We took photos from one of these copies and have included a few of those below that were clearer than Steve’s photos. The print on this book is very small and the books are very fragile. Therefore, getting great photos of them is a challenge.

Note that the cascade is referred to as “mixing” in the book and the shower is called both the shower and “the chase”. Some other details you might want to pay attention to include the fact that juggling using up to 12 balls is included in the instructions, with 12 being noted as being the limit to what is possible. The publication of this book is at the time that Frank Le Dent was performing 11 balls, so I believe the author was well aware of Le Dent’s work. Also note that this might be the only or first book that gives detailed instruction on how to start 6 plate juggling. Five club juggling is recommended to be done doing three in one hand and two in the other, although a cascade is mentioned as a difficult pattern more prone to collisions. Six clubs is mentioned as possible, but the author doubts that anyone will ever be able to juggle six for any length of time. The hoop rolling section is fairly detailed and interesting. The “Miscellaneous Feats” section contains some interesting tricks. Like nearly all old juggling books, this one includes the ball on parasol / umbrella trick, but instructs that it must be done using an invisible thread that attaches the ball to the center top of the parasol. Apparently all Western jugglers thought that Japanese jugglers were using gimmicks or were too lazy to learn the actual trick! 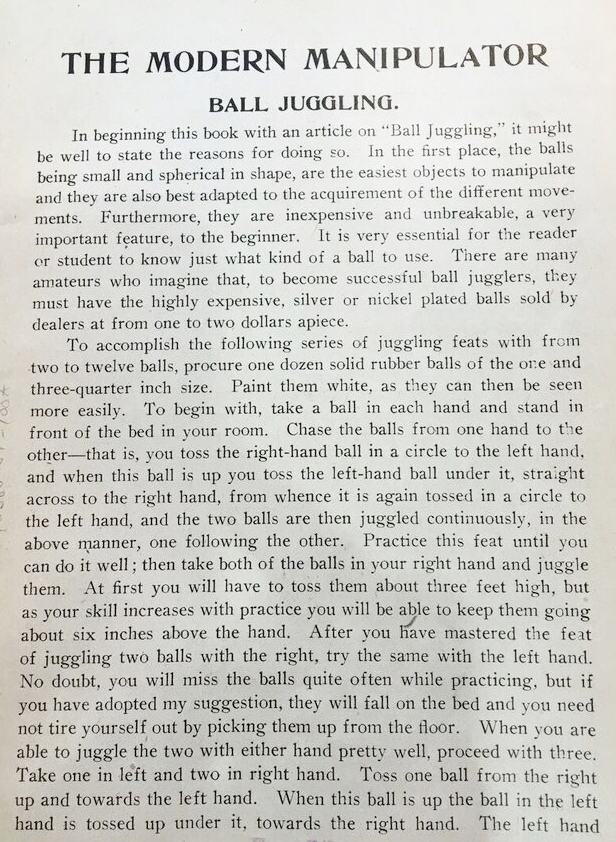 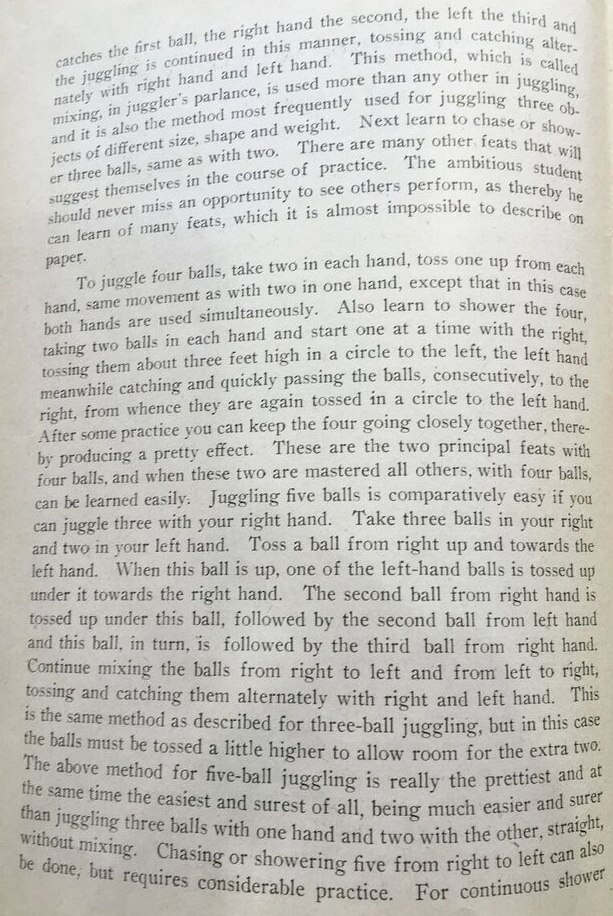 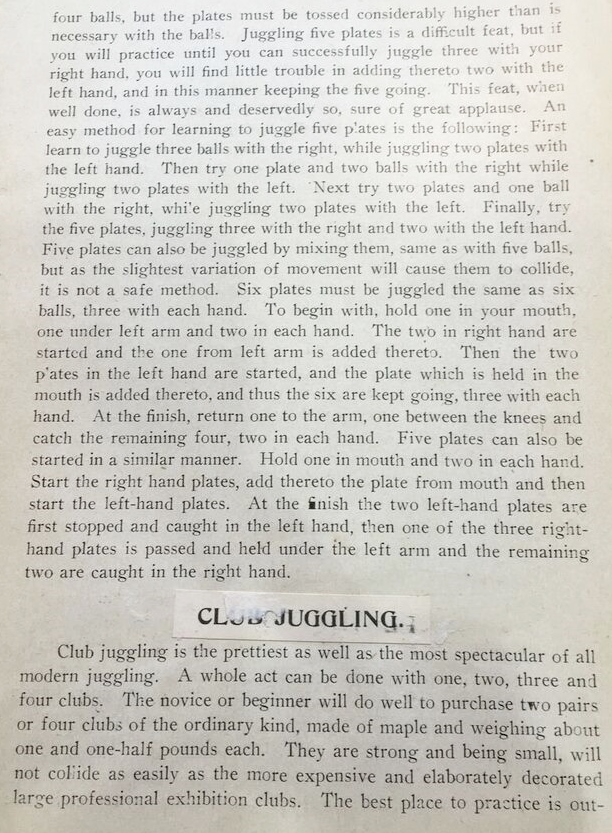 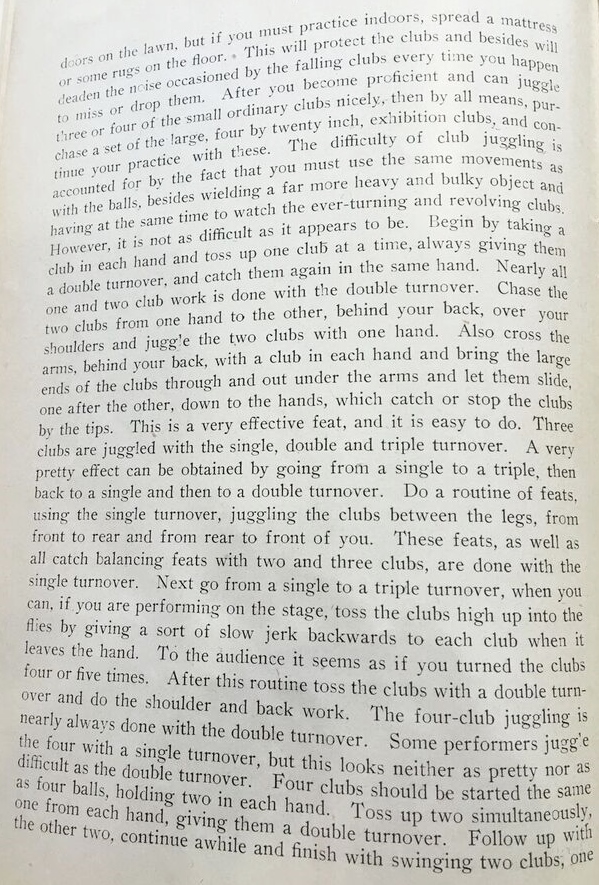 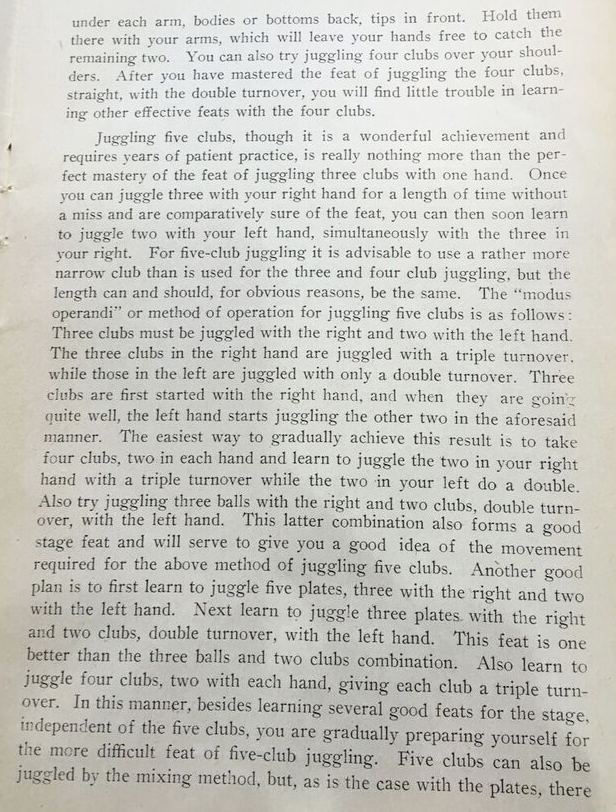 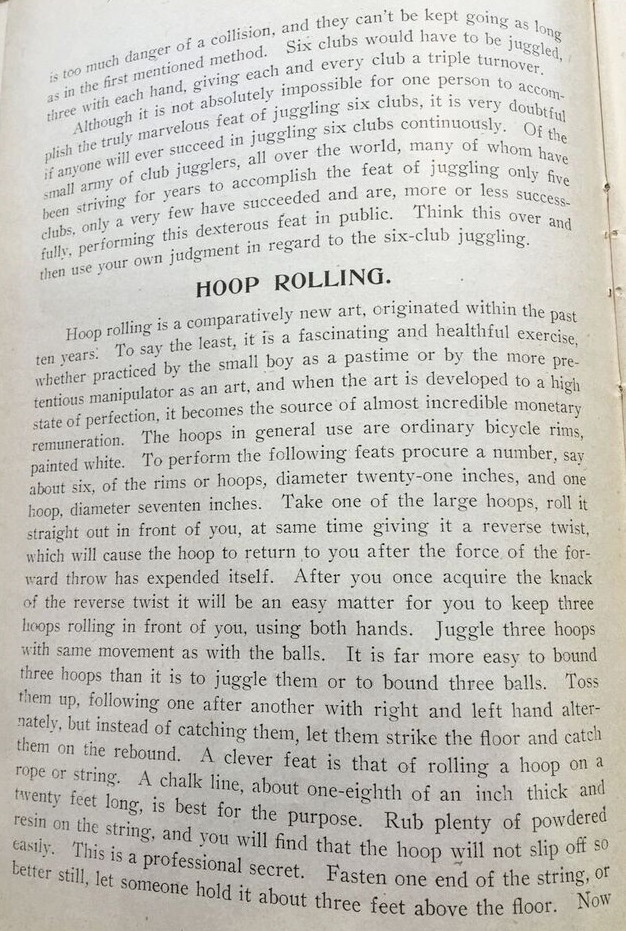 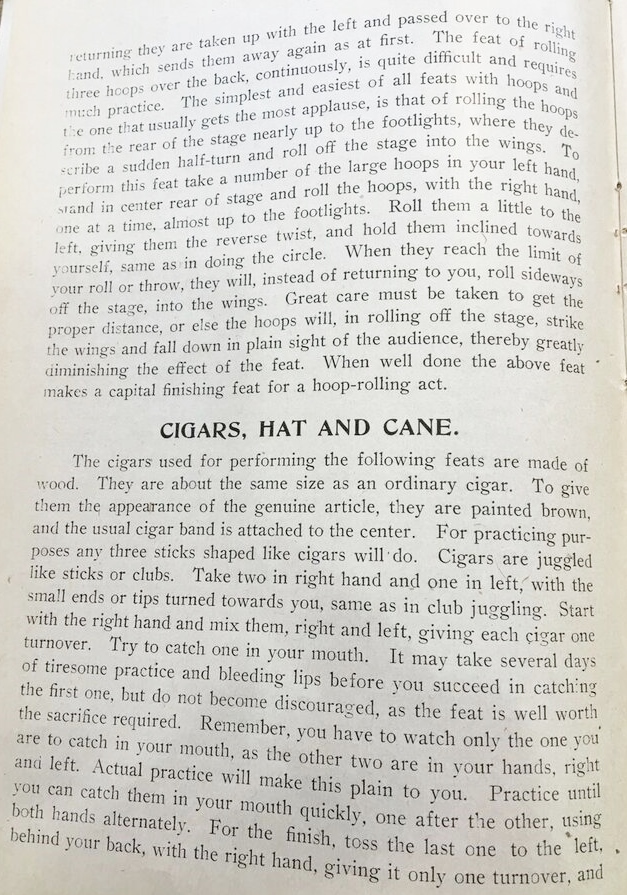 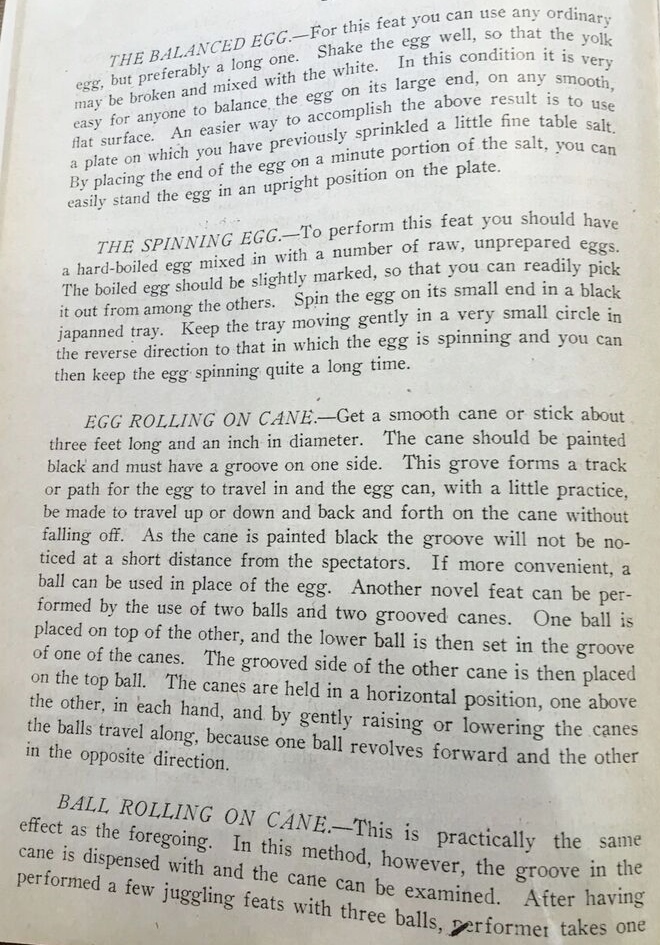 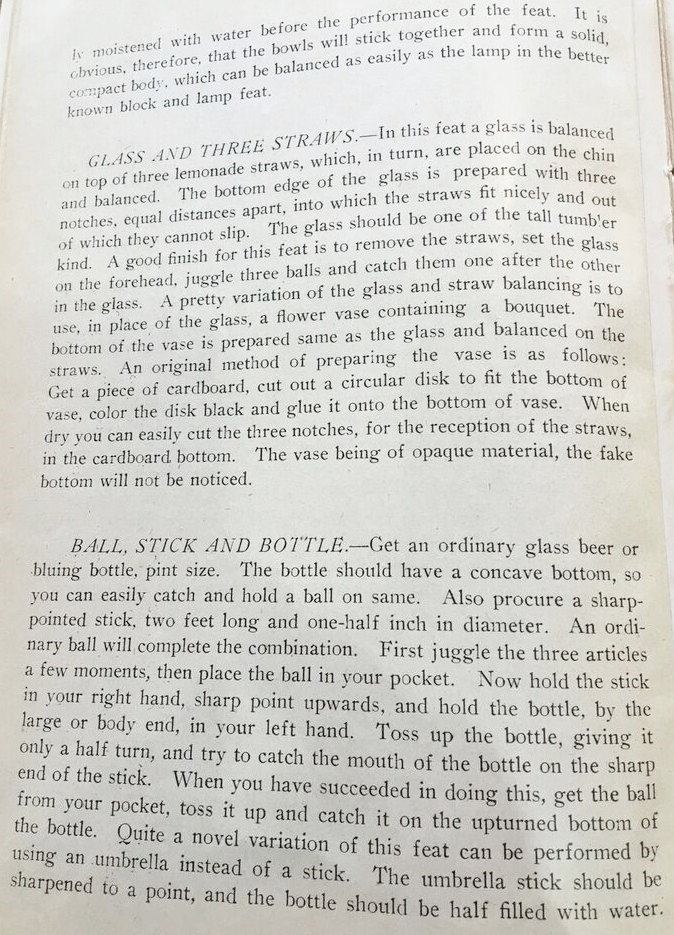 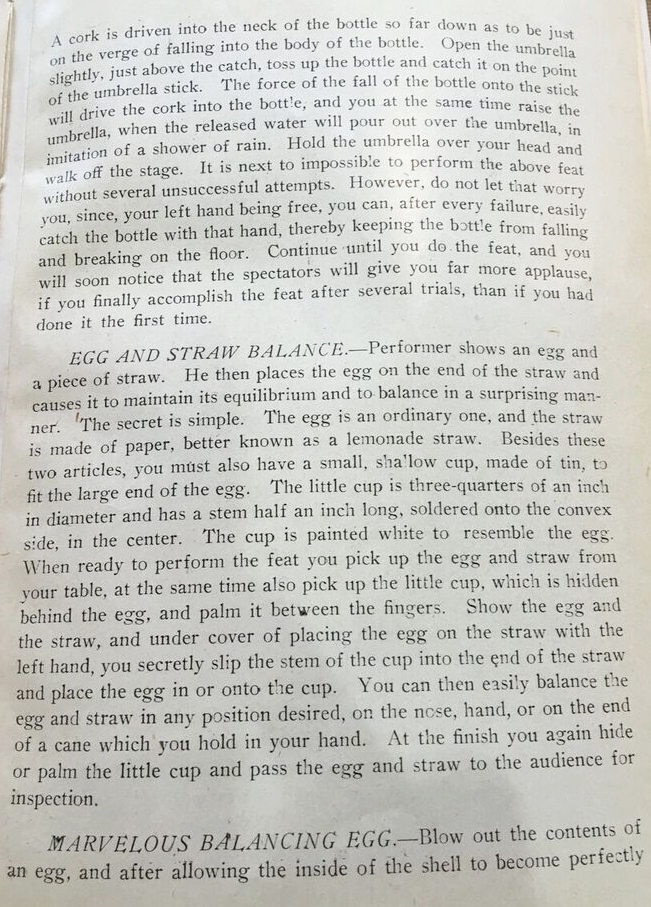 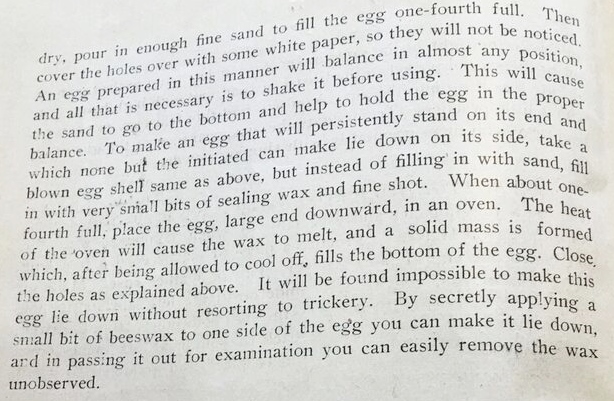 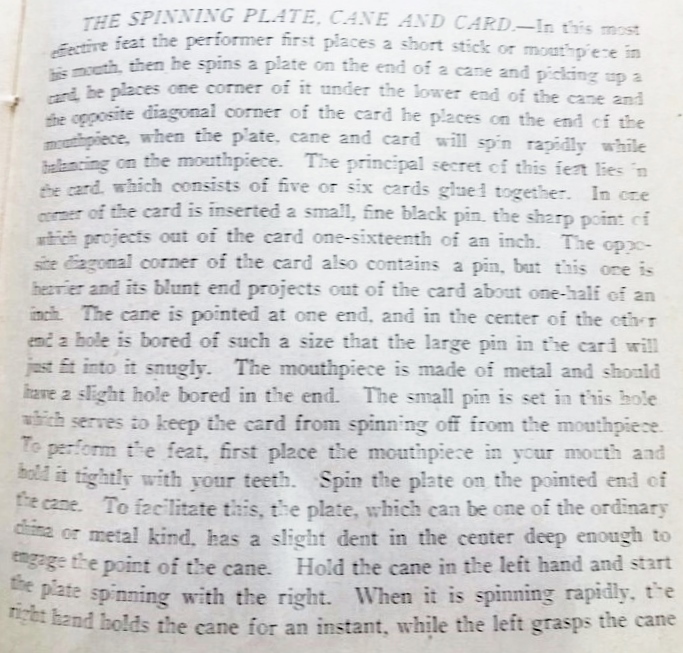 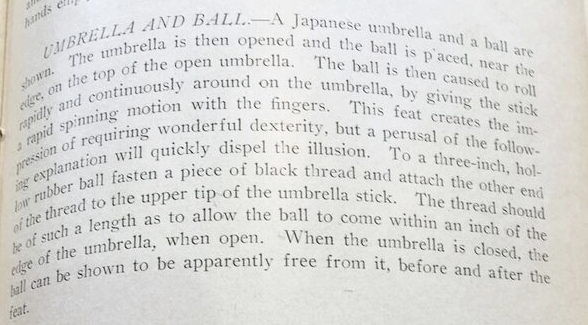 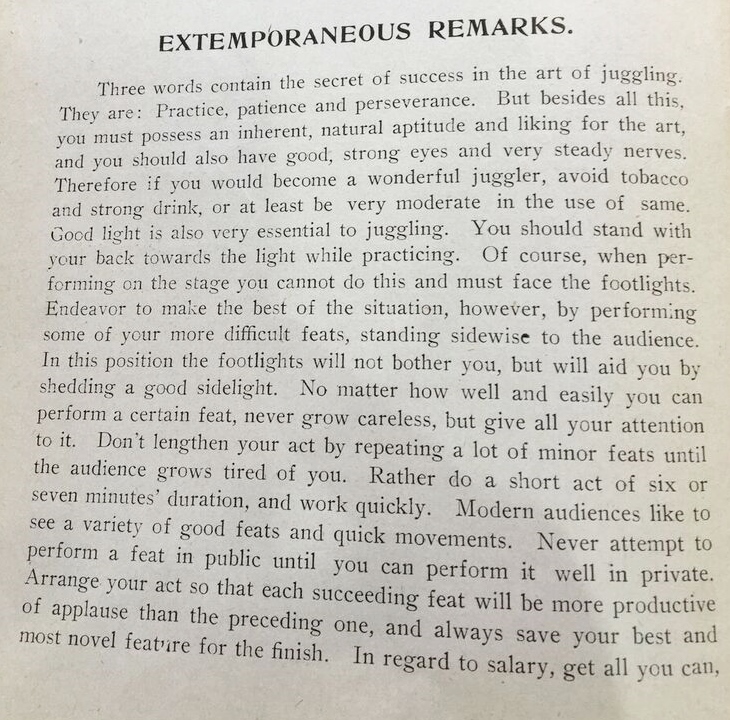 We can learn a great deal from early juggling books and it’s my hope to be able to share more with eJuggle readers in the future.