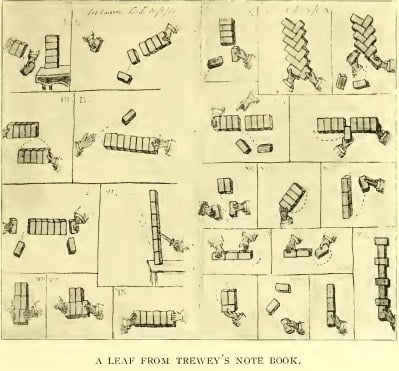 I have written about the origins of many types of juggling and continue to do research on various juggling genres. Several of my recent subjects have crossed paths regarding early cigar box juggling and similar skills, so I thought I would collect some of these findings and do some further research about juggling with cigar boxes. So, let’s take a look at some of the jugglers who influenced today’s cigar box masters and learn about the origins of this form of manipulation.

Cigar box juggling is believed to have its origins in Japanese wooden block tricks. The earliest known reference to such tricks is from an advertisement from 1868 for Tannaker Buhicrosan’s Imperial Tycoon Japanese Troupe, which mentions their juggler, Toorukitchie, doing “block balancing”. An ad from the following year for the troupe calls the skill “brick balancing.” Below you can see a photo of Toorukitchie with his blocks in the background.

Japanese juggler Gintaro Mizuhara (1875-1952) performed with such tricks and shared the following information about them.

Some of our most effective feats are very old, and a kind of tradition attaches to each of them. Take, for instance, the familiar balancing feat performed with blocks of wood (Fig. 1). I build up a pile of these blocks ten or eleven feet high, and place a glass of water on the top. Then I push the bottom block very gently on one side with my fan, but before the whole pile can fall I slip my fan under the bottom block and balance the pile on my fan. Then I throw up the pile of blocks and catch the glass without spilling a drop of the water. (Click here to see Gintaro perform this trick.)

This is only one of very many feats performed with these ordinary blocks of wood. I am able to perform with these blocks for two hours; as a rule, the feats I present to English audiences last for five minutes.

These feats are based on those devised by a Japanese prisoner in the 17th century. In those days the Japanese wore their hair long, and, to protect it during the hours of sleep, very high pillows were used. Even the occupants of the jails had to be provided with pillows; plain wooden blocks, similar to those used today by Japanese jugglers, served the purpose. The particular prisoner to whom jugglers will always be grateful probably suffered from insomnia; at any rate, he amused himself by throwing up the blocks in his cell and catching them. Then he devised various simple little balancing feats with the blocks, and the exercise he obtained in this way improved his physique. His appearance became too good. The authorities could not understand how a man living on a little food could contrive to put on flesh. The juggling prisoner was watched, and, being caught in the act, was taken to the governor of the prison.  The prisoner was commanded to perform; tradition does not say what were the actual feats he presented, but they impressed the governor, who had the man taken to the civil authorities of the town. In the end the prisoner was released, because he was appointed Court Entertainer to the governor of the State.

Gintaro described some of these tricks in an article that appeared in the May 1906 edition of Stanyon’s Magic Magazine and included the following illustration. 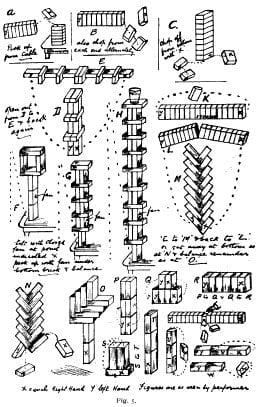 Félicien Trewey (1848 – 1920) was a French juggler and variety artist who performed many block tricks similar to Gintaro and apparently did so earlier than the Japanese artist. It is unknown how Trewey learned them. A page from Trewey’s journals shows his illustration of these tricks. You can see it below.

Once again, the herringbone balance (top right) and modern-style tricks with three boxes (bottom right) can be seen. Trewey also apparently used three “round blocks,” as the oldest known juggling catalog, the Catalogue Of Fine Juggler Goods Manufactured By Prof. Otto Maurer, which was published in New York City, NY (USA) in the late 1880s, contains an advertisement for Trewey’s Round Blocks, which you can see below. This was the first known example of cigar box-type props for sale. 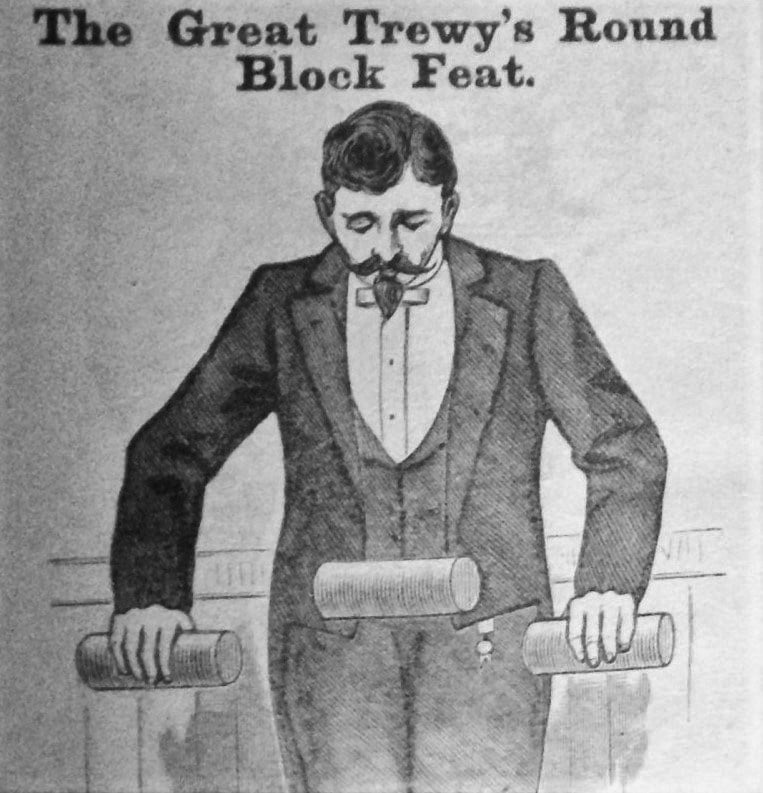 D’Alvini (1847 – 1891), who was born William Peppercorn, learned many skills from the Tannaker Troupe from Japan. Among these were tricks with wooden blocks. A newspaper article from 1877 reads, “His dexterity in manipulating a number of wooden blocks and in balancing them in almost every conceivable position, has, we should imagine, rarely been surpassed.”

Geronimo “Boum Boum” Medrano (1848 – 1912) was a famous clown born in Spain. He was the founder of Cirque Medrano in Paris in 1897. He is most famous to jugglers as a possible influence for the modern cigar box act, although he actually used bricks and performed on a table. He was, in turn, obviously influenced by Japanese wooden block tricks. 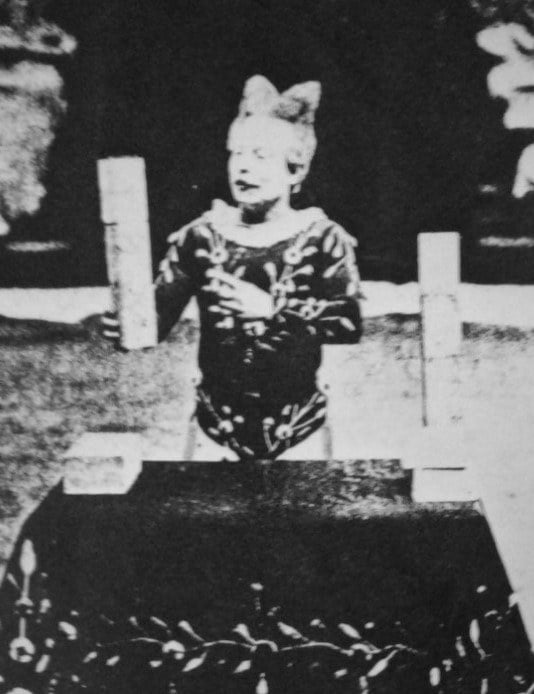 Rosani was born Joseph Stadtmuller in 1868 in Brooklyn, NY (USA), and was a juggler who played the American Lyceum and Chautauqua circuits over a 40-year career. He is generally acknowledged to be the first juggler to do a full-length one man show of just juggling. Rosani billed himself as a “Juggler and Manipulator,” as many of his tricks didn’t involve toss juggling. He performed with whips, pipes, plates, balls, sticks, hats, lamps, cigar boxes, bowls, glasses, swords, tops, flags, pool cue sticks, hoops, bottles, fans, and other items. Rosani was renowned as being the first person to juggle three large flags, which he did at least as early as 1900. When he retired in 1929, Rosani sold his props and act to George DeMott, an early IJA member. Rosani passed away in 1944. As you can see in the following photos, he did a number of balancing tricks with boxes. 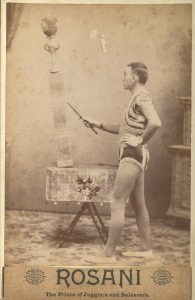 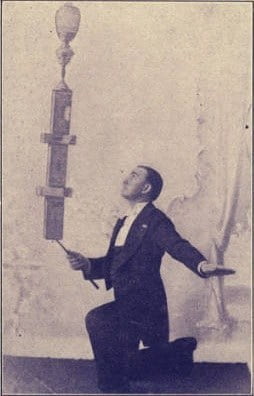 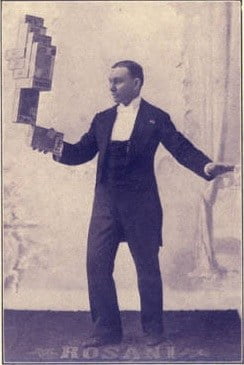 Jim Harrigan (1866 – 1923) may not have been a great juggler, but he is famous for inventing or popularizing two common elements of a juggling act that have endured ever since. Harrigan began as a typical performing juggler in the 1880s in the United States, but accidentally developed the “tramp juggler” character when his normal costume wasn’t available. He also was the first known talking comedy juggler in the USA. Jim juggled with balls, everyday objects such as bottles, plates, and paper, and was one of the earliest performers to use cigar boxes. Even though Harrigan was the first tramp juggler, and even copyrighted the character, other performers such as W.C Fields became more popular for it. However, Harrigan’s creative ideas revolutionized performing juggling in ways that continue to this day. 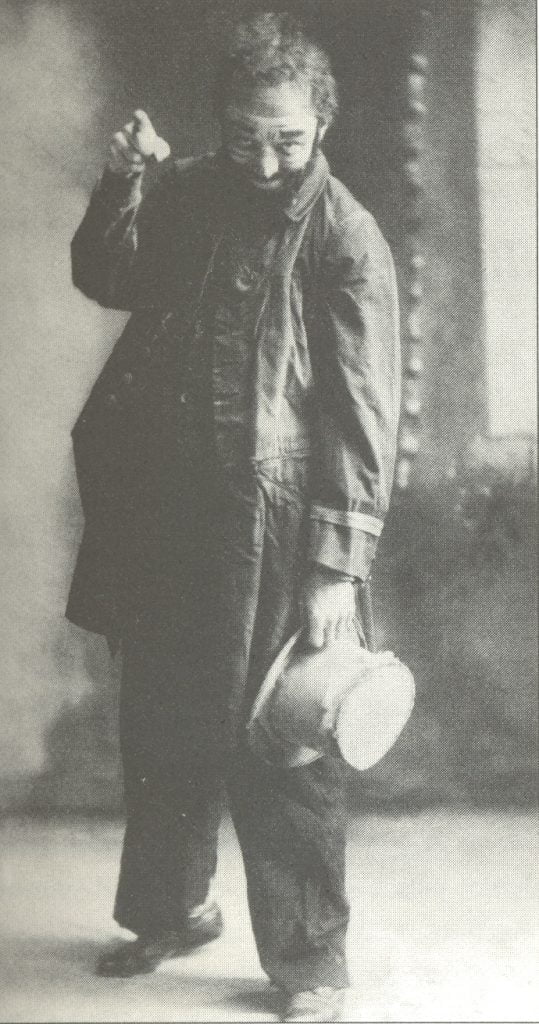 W.C. Fields was born William Claude Dukenfield in 1880. Before finding fame as a comedian and actor, Fields was a successful juggler. He popularized the tramp juggler character created by Jim Harrigan, and performed with cigar boxes, balls, canes, and hats. He began as a silent juggler, but eventually added muttering and sarcastic asides. As a juggler, he performed on four continents and was a vaudeville star. He eventually transitioned to plays and films, taking on the grumpy comic persona that was also somehow sympathetic, for which he is now mostly remembered. Fields passed away in 1946. Parts of his act are reproduced in some of his films, especially in the 1934 movie The Old Fashioned Way, which you can see below. It was Field’s influence and fame that is probably most responsible for cigar juggling becoming a standard part of a juggler’s repertoire.

Jugglers such as Stetson and Bela Kremo refined cigar box juggling, as you can see in the follow videos. 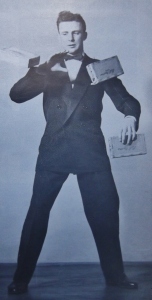 The first juggler to do multiple pirouettes with cigar boxes was Rudy Schweitzer, who did so in 1960.

The first to do a triple pirouette with three cigar boxes was Kris Kremo, who did so around 1977. 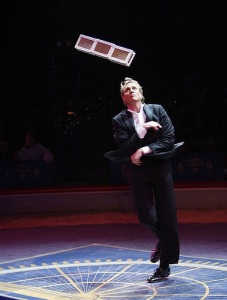 In the 1970s and 1980s, Alexander Frish became famous all over the Soviet Union for his work with both three boxes and for picking up 15 boxes in a horizontal line one at a time, which was an early routine described by Gintaro and Trewey.

One variation of cigar box juggling that was popular in the middle of the twentieth century was the use of spools to do standard box moves. You can see a routine using these at the beginning of the following film of Mayes and Roth from 1920.

You can briefly see these being used in the following video of the 1950 IJA Convention, from 6 seconds to 9 seconds from the start of the film.

Today, cigar boxes masters such as Eric Bates, Shinya “YaYa” Yamane, and many Japanese practitioners are pushing the limits to what is possible with boxes, but it’s helpful to know how the art form got to where it is today.