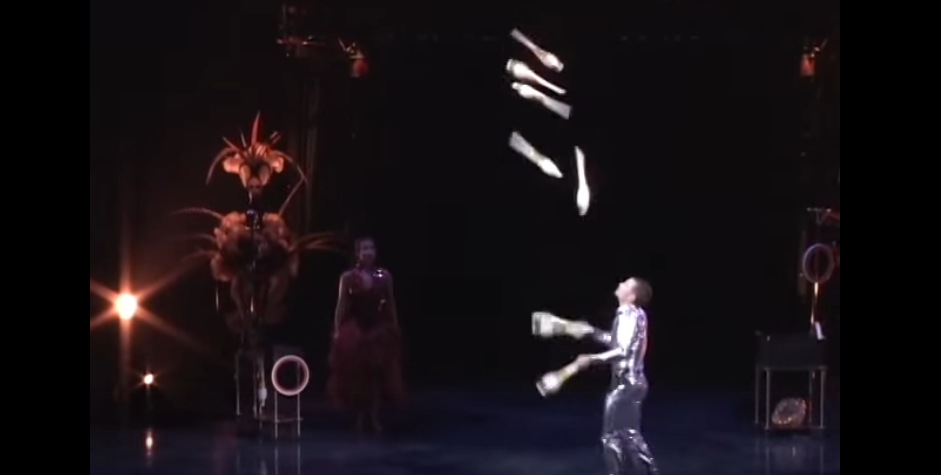 Having 1 million views in a video on YouTube is incredible. Just having 100,000 hits is tricky.

Some factors to achieve so many visits can be:

Here are several of the many videos of juggling with more than 1 million visits on YouTube. I know there are many similar videos, but here is a sampling.

The video of Anthony Gatto in Cirque Du Soleil’s “Kooza” reached the million threshold a few weeks ago.

This performance from 2008 is live footage from of “Kooza” production. The video was uploaded to the official channel of Anthony Gatto on December 10, 2010.

In this video, Lauge tries something new for him. It obviously worked well because the video has more than 1,200,000 visits.

The video was uploaded on October 4, 2011 and it’s on Lauge’s official channel.

Here. Dustin performs tricks with contact and illusions, among other things.

This is from a channel created by by Lucas Gardezani Abduch, who is from Brazil. This channel has many videos, and many subscribers.

This is a video about manipulation and illusion with buugengs. The video was uploaded on October 9, 2012.

Here we have one of the most famous contact jugglers. On this occasion we have his routine with bouncing in a large wooden triangle. The video was uploaded on November 26, 2007.

This is a comedy juggling duo made up of Jon Wee and Owen Morse. Here a video of their audition for American’s Got Talent, 2016.

This juggler who worked in Cirque Du Soleil’s “Totem.” In this video, isfamous Conic routine.

In this video, Josh Horton juggles many iPhones, setting a world record. The video was uploaded on January 6, 2016.

Here more videos with that amount of visits.

See also this youtube filter for many more (as well as soccer ball kick juggling, and more).