Most jugglers are quite familiar with Juggling for the Complete Klutz, the 2.5 million selling book (with attached set of three cube shaped beanbags) written by John Cassidy, Darrell Lorentzen, and B.C. Rimbeaux. It’s influence on popular culture and in the juggling world since its publication in 1977 is quite significant. However, it certainly wasn’t the first juggling set intended for the general public that paired instructions with a set of balls. 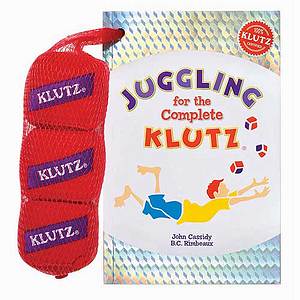 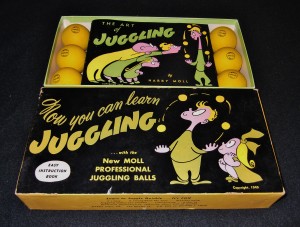 The first mass marketed juggling set was created by veteren juggler Harry Moll of Denver, Colorado (USA) and released in 1949. It contained six small solid rubber balls and an instruction book inside of a rectangular card board box.  The instruction book included pictures of his good friend Francis Brunn and his sister Lottie Brunn and directions on how to juggle up to six balls. It also gave instructions on floor bouncing and a variety of other tricks and gags. The set was produced for several years. The author owns seven of these sets and some are always available on ebay, although the asking price on the auction site can be up to $250.00 USD for a nice set. In other words, they’re the oldest set, but enough were made that they aren’t extremely rare. Mr. Moll did produce another juggling set, which is, however, extremely rare. 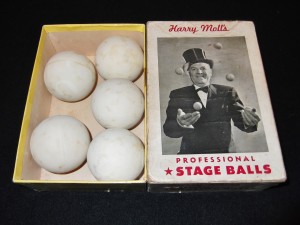 After the success of his first set, Harry Moll decided to create and sell a set designed for more advanced jugglers featuring much larger, white versions of the solid rubber balls that he included in the first set. These were his “Professional Stage Balls.” Many jugglers from the 1950s swore by these balls, as they were the first reasonably sized ball made for juggling and had a great weight and bounce. Like the first set featuring the small yellow balls, this set included six balls. Unlike the first set, the stage ball set is extremely rare. I’m only aware of two sets still in existence. One is in a museum in Texas and the other is in the Historical Juggling Props Exhibit, although it is missing one ball. 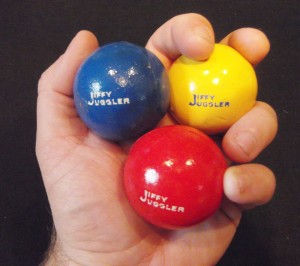 With the moderate success of Harry Moll’s original set, imitators were sure to pop up. In the 1950s, the Brookglad Corporation of New York, NY (USA) released the Jiffy Juggler set. It was a very bare bones set, featuring three brightly colored, plastic coated dense foam balls and full color instructions on how to do a three ball cascade. There was no attempt to give any instruction beyond the most basic pattern. The set shown here from the Historical Juggling Props Exhibit and is the only set known to exist.

THE MASTERY OF JUGGLING SET 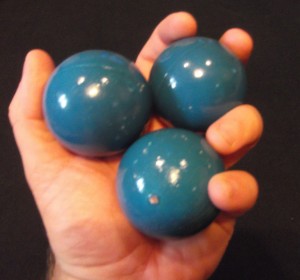 In 1974, The Mastery of Juggling set was released by Donald D. Brown of Allentown, PA (USA). It included six plastic coated foam balls and was a very close copy of Harry Moll’s first set. The instruction booklet explained how to learn up to five ball juggling, with is odd considering that the set included six balls. The illustrations in the booklet are almost identical to those in Moll’s. These sets can be found a few times a year on ebay and this writer has five sets in a variety of color schemes for the balls. 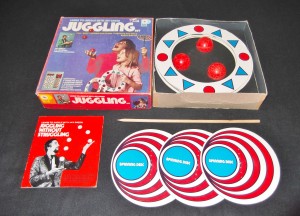 The final pre-Klutz juggling set was the Learn To Juggle With Jay Green Juggling Set, which came out in the mid 1970s. It was released by Pastime Industries Ltd. of New York, NY (USA). They approached Jay Green, an IJA champion and well known performer and juggling teacher from New York City, about putting together a juggling set. The set included three plastic covered foam balls similar to those in the Jiffy Juggling and Mastery of Juggling sets. It also included three cardboard “spinning discs” (which were like flat spinning plates with five divots in them), a pointed stick for the discs, and three colorful card board juggling rings. A later version of the set replaced the discs with scarves. The set also included a booklet titled Juggling Without Struggling written by Jay Green. The booklet taught a three ball cascade and reverse cascade, disc spinning, and three rings. These sets are very rare.

If anyone is aware of any other juggling sets from this period or know of any other examples of the Moll stage ball set, the Jiffy Juggler set, or the Jay Green set, please contact this writer. You can see all of these sets in person by visiting David Cain’s Historical Juggling Props Exhibit at his home or at the 2014 IJA Festival.