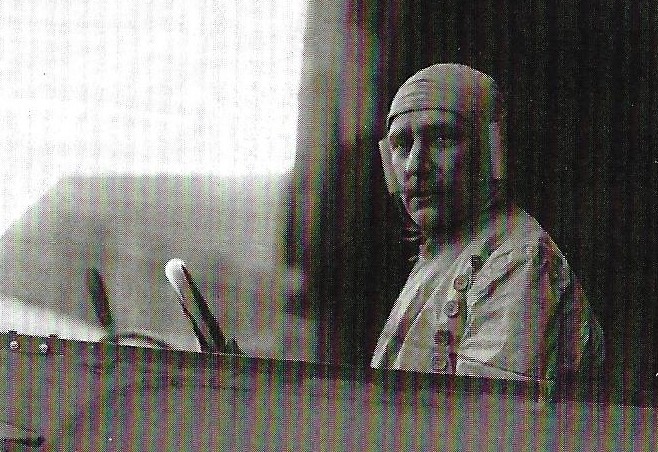 Jugglers constantly seek to push the limits of gravity by controlling objects thrown into the air, so it shouldn’t be a surprise that several of them were early airplane pilots as well. Let’s take a look at a few of them.

The idea for this article started when a saw a rough set of Harry Lind clubs up for auction on eBay. At $500, I didn’t bid, but I did write to the seller to see if they knew who they belonged to. Seller Michael Turner said that they had been traded to his father Marshall Turner by vaudeville juggler Hap Hazard for electronic airplane equipment. I learned that Marshall Turner and Hap had a shared interest in airplanes and both participated in “fly-in” events that took place in the mid-1950s in the US Midwest. I hadn’t heard of Hap Hazard before, but as a juggling historian, I sought more information on who this was. My first stop was to simply do a google search. There were a few mentions of him in some old Billboard magazines, but the other main mention was from an IJA Newsletter in the mid-1970s stating that Hap Hazard had perished in a plane crash, and that he had had a lifelong connection to flying. I discovered that finding information on Hap Hazard the pilot turned out to me much easier to find than Hap Hazard the juggler, starting with his real name.

Harold Hart was born on June 6, 1894 to a family of doctors and surgeons in California. The Norris and Rowe Circus wintered in San Jose, and he visited them at their winter quarters as a child. This is where his interest in performing began. Harold’s mother died in 1907, and he ran away with the circus the next year! At first, he helped with other acts, but soon learned enough to do an act of his own. He learned to juggle, tumble, perform head and hand balancing, do tight and slack wire walking, and play several instruments. He apparently wasn’t particular strong in any one area, but was said to make up in quantity what he lacked in quality. 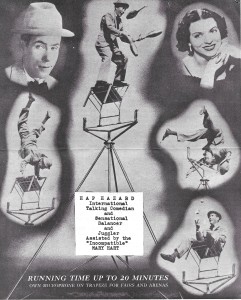 Harold learned how to do headstands from Frank Smith, the great Ringling Circus star, and started performing a slide down an 80 foot wire balanced only on his head in 1912. He would soon start performing the trick over the audience. In 1916, he fell into the audience while performing the trick at the Marlowe Theater in Chicago. It was the first of several accidents that would lead to him earning the name Hap Hazard.

During WWI, Harold enlisted and became a pilot. His slack wire acrobatics work made flying general easy, but he crashed on October 1, 1918 and shattered his arm. Stories differ on the specifics, but he earned his nickname while recuperating from the injury. In one version, the doctor told him it would be a “Hazard” to return to acrobatics, and Harold responded “Doc, that would be a good name for me” and used it from then on. In another version, the stateside surgeon operating on in referred to the emergency treatment he received in France right after the crash as being “the most haphazard job I ever saw.” Either way, the name stuck.

In an article from the 1960s about Hap, a story was told that in 1920, he joined a war buddy pilot, Lt. John “Tony” Alcorn and the pair broke into a flying circus. The pair performed stunts such as wing walking and plane changing. Unfortunately, an accident during one of these stunts killed five people on the ground, but Hap walked away alive. It should be noted that Hap’s living relatives, who were contacted for this article, question the accuracy of this story, or whether it happened at all.

What we do know is that Hap joined Howe’s Great London Circus doing a high slack wire act and a 90-foot head slide. He met a girl, Mary, practicing bareback riding on the first day of rehearsals. He would soon teach her tight wire and the two were married and went into Vaudeville together – with Hap concentrating on juggling and wire balancing, and adding lots of comedy, for which he quickly became famous. Mary was quite the attraction herself – known for being quite a beauty and playing straight man in the act. She would glamorously feed leads to his punch lines. At one point, they were billed as “Hap Hazard, the Careless Comedian, and Mary Hart, Who Cares Less”. 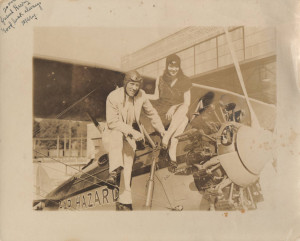 In the meanwhile, despite at least one, and possibly two crashes to his credit already, Hap continued to be interested in flying. He had a special plane built for him and his family so that they could make jumps from town to town for the next five years.

At the start of WWII, he went on a USO tour with Fred Astaire and was overseas for almost five years. When he returned, he performed in theaters, then clubs, and finally with the Barnes and Carruthers Fairs, before retiring in 1955.

Hap was an active IJA Member and kept in touch with juggler Bill Talent a lot in retirement. He also built a high-speed plane in his basement, and drove a Porsche. In 1973, still pushing his luck, Hap Hazard went up in his homemade plane with a young Navy pilot and crashed while trying to perform some stunts in Salinas, California, killing both on board.

Well, the clubs on eBay didn’t get any bids, but I did manage to procure the set for a smaller fee for inclusion in the Historical Props Museum owned by my brother David Cain. I’m glad that we can preserve a bit of history connected to this now-not-so-mysterious juggler. 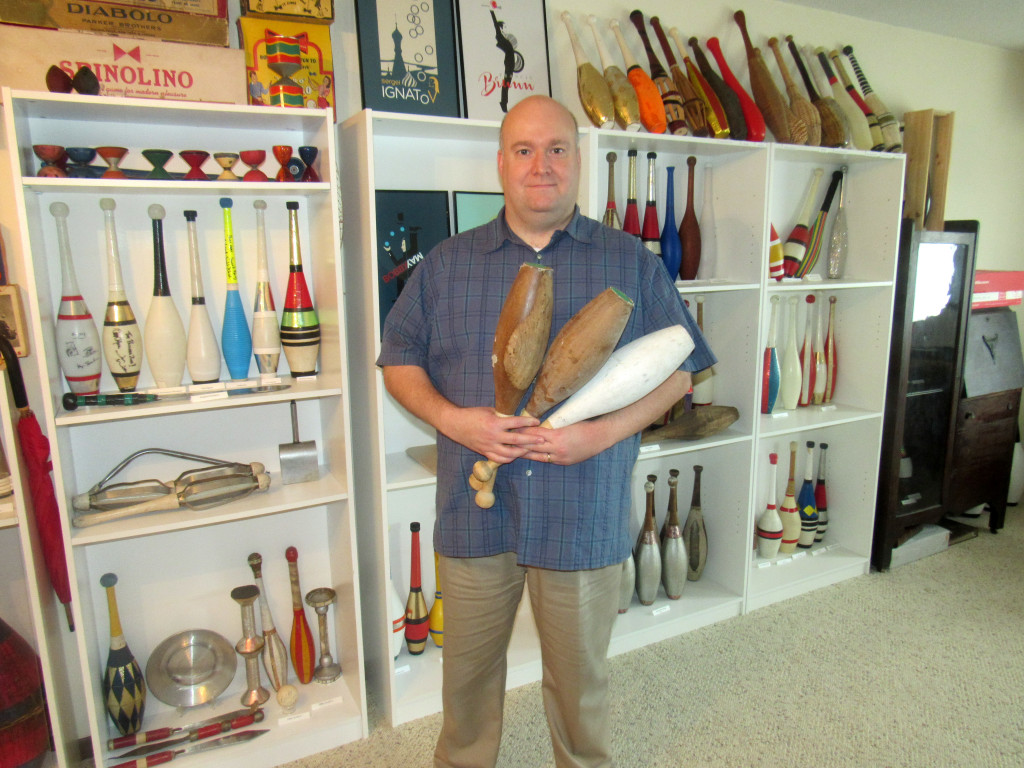 Salerno, one of the best jugglers at the beginning of the 20th century, was also one of the world’s first pilots. He received one of the first pilot’s licenses in Europe in 1910. He won numerous prizes in flying competitions with his Schulze Herford Monoplane that year. 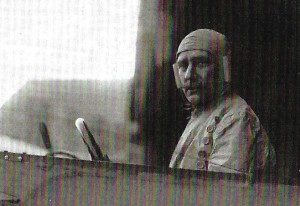 It may seem odd for many of you to see me list The Wright Brothers in this article as jugglers. However, juggler and Punishing Pun-master Bob Nickerson recently pointed me to the book The Wright Brothers by David McCullough. In the book, several pages are devoted to Orville and Wilbur’s peculiar interest in learning the diabolo while on a business trip to France in 1906, just three years after their world’s first successful powered flight. These flying pioneers caught the diabolo bug after watching children, men, and women playing with the toy in the park in Paris. They spent many hours devoted to learning and mastering the diabolo, so much time that it didn’t go unnoticed by the press. Word even got back to their sister Katharine back in Dayton, Ohio that the brothers were spending too much time on this juggling pastime, rather than their intended business endeavors.

Here’s an odd coincidence or two for you! When I was discussing the Wright Brothers article with Bob Nickerson, I mentioned that I would be combining this information with an article I was doing on Hap Hazard and Salerno. Bob stated that he and the other members of the World Emergency Circus (Bob, Baffle-O Bill Smith, and Jay Breckenridge) performed during the summer of 1983 as the pre-curtain entertainment at the Three Rivers Shakespeare Festival, and were each given a stage name to perform under for the season. Bill was named Will Cricket and Jay was Nicholas Newfangle. Bob’s stage name – which does seem like a good fit given Bob’s unconventional ways – was Hap Hazard! Another juggling connection to that group – the person that hired the trio to perform that summer was Attilio Favorini, the head of the University of Pittsburgh Theater Department, and father of juggler Fran Favorini.