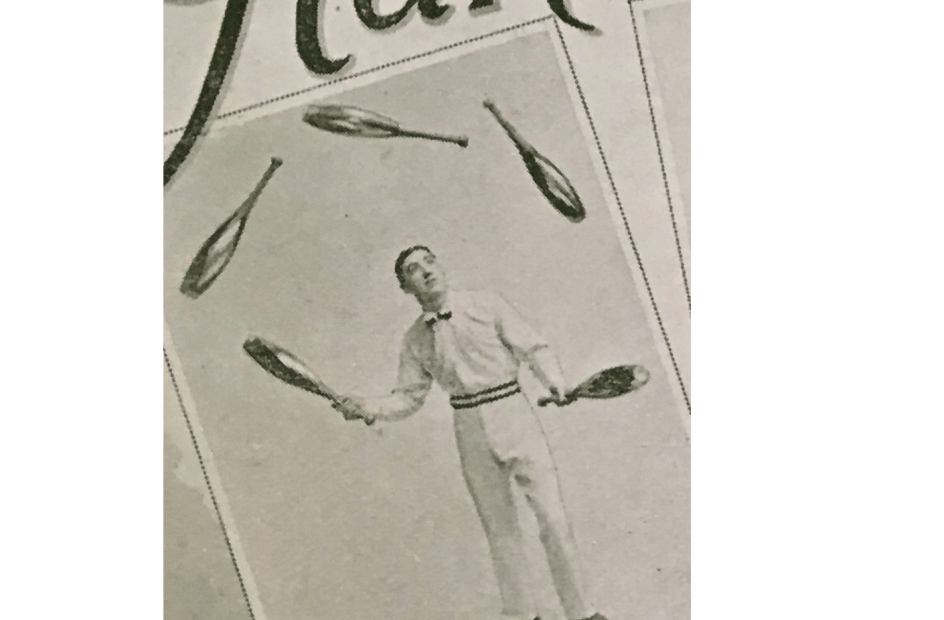 James DeWitt Cook is believed to be the first three club juggler, with print references dating back to 1878, but who was the first to master five and when?

To try to answer this I went beyond accounts published in later years by also searching sources from the era. I trawled Newspapers.Com, the Illinois collection, the Internet Archive, British Newspaper Archive, Gallica.bnf.fr and Ancestry.co.uk, plus some online theatre archives with old programmes.

The four later accounts I found are all American, date from a decade or more after the feat, with some omitting the year of the supposed ‘first’. The reminiscences are:

I start with the earliest proven five club juggler and performer before looking at the earlier contenders.

1901, definite and maybe earlier: Will Hanvarr 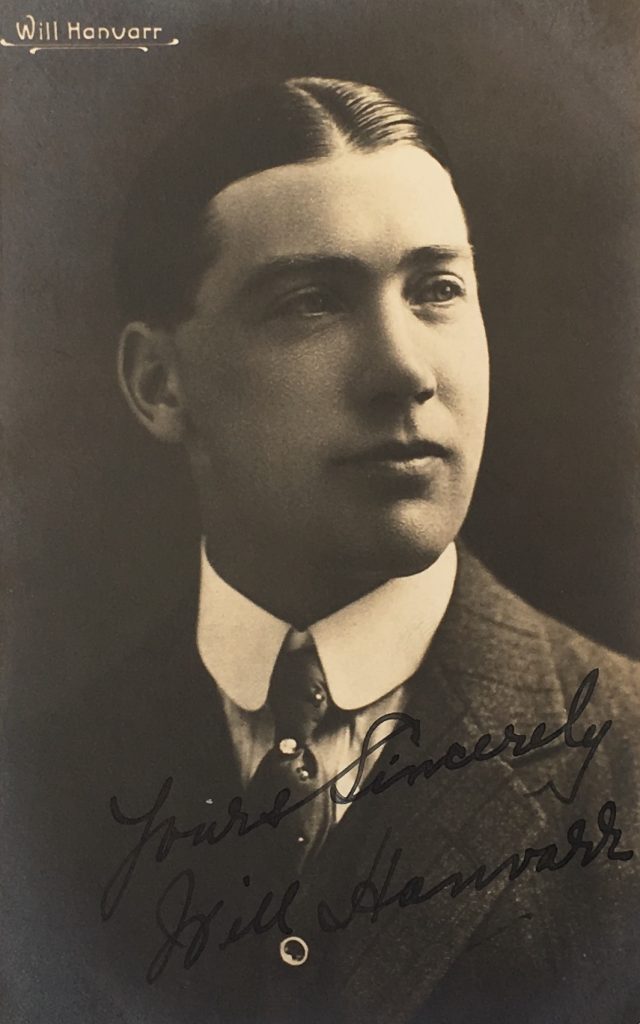 The earliest published and corroborated newspaper accounts of five club juggling are for Hanvarr, who is cited in the 1912 list as the first to ‘mix’ (cascade) five clubs. There are two newspaper accounts in April 1901, one being, “Hanvarr is performing the remarkable feat of juggling with five clubs at once.” (Music Hall and Theatre Review, 26 April 1901), the other being,

GRAND THEATRE OF VARIETIES. One of the cleverest jugglers we have ever seen at the Grand appears there this week in the person of Hanvarr. In a neat and effective act Juggling on the Lawn he presents some remarkable tricks, performing, for instance, with five Indian clubs, with a basket chair, table, cushion and silk-handkerchief, and other unusual articles. (Walsall Advertiser, April 20, 1901 p5)

A more detailed review of his act, corroborating that one, was published in August 1902 when Hanvarr was appearing at the London Pavilion:

Hanvarr, after juggling surprisingly with these five clubs, attempts to catch them all as they descend. Several times he fails: and on each occasion the audience encourage him with hearty plaudits. Baffled once more, he “rests” himself by casting aloft a chair, table, and cushion. Again he tries to gather in his arms the five clubs. Will he succeed? Yes! He has them all at last, and the delight of the beholders breaks forth In rapturous cheers. (The Era, August 23, 1902, p19)

Hanvarr’s printed publicity, definitely being used by 1903, showed five clubs being juggled plus tricks with four, and there’s another five-club press citation in 1905 (while one in 1907 improbably says he was juggling eight clubs then).

It is fair to expect he had been juggling five clubs for a while before he added the feat to the show. He would have been 26 in April 1901 and had at least five years performing experience in top London, UK and continental venues – though not yet America. He had been strongly influenced by the American juggler Morris Cronin who first came to England in 1894. Hanvarr continued performing internationally, later with his wife, Anna Lee, as Hanvarr and Lee, through to the late 1920s or beyond before both retired in America. 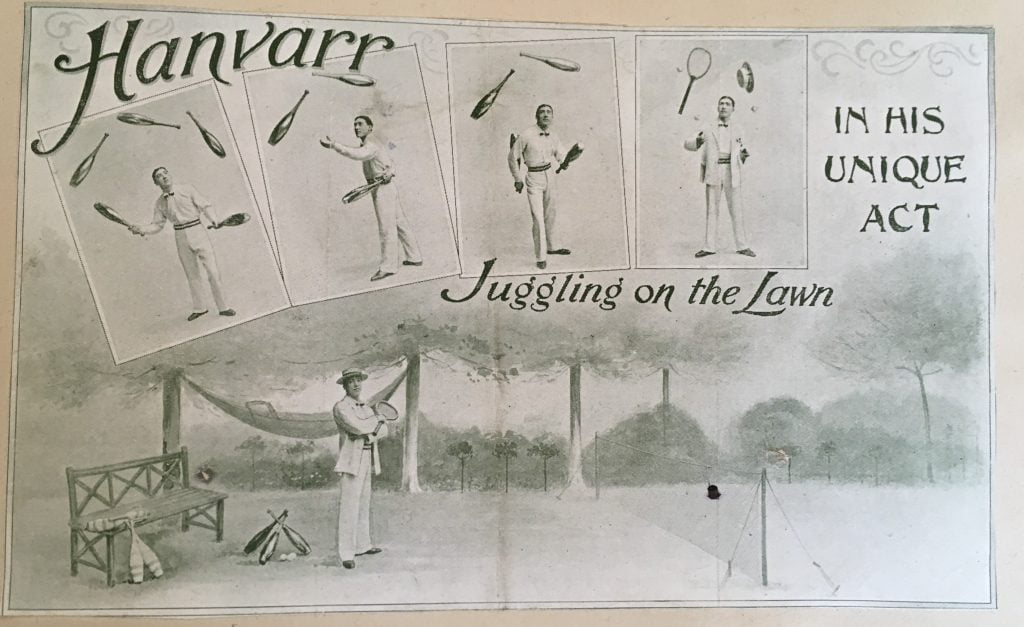 Edward van Wyck’s move from performance to commercial juggling club manufacture in 1895 was significant, as to successfully juggle five would have required a set of fairly light and well-balanced clubs, each almost identical to the others. His clubs were used by Darmody and Hanvarr, and by the Juggling Johnsons, of which Pat McBann was a member, (1901 Music Hall and Theatre Review, UK) while Ben Mowatt Sr. is reputed to have undertaken much research into getting suitable clubs for his son.

Whether Breen used van Wyck clubs in 1895 is unknown, but the first newspaper five club reference was made that year: ‘The Minstrel Show ..in part second are “Breen” the Champion Club Swinger, who handles five clubs at once…’.(The St Johnsbury Caledonian (Vermont), Aug 30, 1895, p1). This was surely referring to Tom Breen. but it was Breen who compiled the 1912 list of firsts, citing his son John as the first six and seven club juggler but crediting others with five: “Pat McBann – the first to juggle five clubs” and “Billy Hanvarr – the first to mix five clubs”. Additionally there are no corroborating contemporary press citations.

Club swingers (as against jugglers) are known to have manipulated up to six clubs (see old club swinging books by Tom Burrows for examples), so the word ‘handling’ cannot be taken for certain to mean that Breen was juggling them, especially since he doesn’t claim that he was.

In October 1897, Claude Bartram (step/foster son of James DeWitt Cook, likely the first three club juggler, and half of the duo Alburtus and Bartram) said:

…now I am attempting the feat of keeping five clubs in the air at one time. In the history of juggling, five objects whose combined weight was more than one pound have never been kept in the air. The five clubs I use weigh 18 pounds. Yet I can do it. For two solid years I have been trying it and it will be a year more before I shall ever put it in our act. (Pittsburgh Daily Post, October 24, 1897).

As five apples weigh more than a pound, I assume he meant to write ‘individual weight’ rather than ‘combined’. The ‘Yet I can do it’ phrase can be read as ‘I will achieve this’ in this context. I can find no mentions of Bartram actually juggling five clubs around that time.

You can see, above, that Tom Breen makes a distinction between McBann ‘juggling’ five and Hanvarr ‘mixing’ five. In 1946, Tom’s son, Tommy, wrote a letter clarifying, “I believe Pat McBann juggles 3 clubs in one hand and 2 in the other hand.”

Putting that aside, there is also a question of timing. In his 1935 letter to The Billboard, Joe Donald, a 1901 member of the European team of the Juggling Johnsons, wrote,

“The Juggling Johnsons were the first team to introduce five Indian clubs, and the boy who did the trick was Pat, who later was known as Pat McBann. The year was 1897. The show was Primrose and Dockstader’s Minstrels.”

Claude Bartram said there were no five club jugglers in 1897, while the Juggling Johnsons only began in 1898 and only started touring with Primrose and Dockstaders in December that year. Pat would have been 15, a young but feasible age to be the first five club juggler. I can find no press corroboration of the feat.

Primrose and Dockstader offered $10,000 for the equal of the Johnsons and $1000 for anyone who could juggle five clubs like Pat. There were no takers for the two years.

The Juggling Johnsons are the best jugglers of indian clubs ever seen in this city and justify the offer of their management to give $10,000 for their equal.) but I have found no evidence of the $1000 challenge for five clubs. Another club juggler, Darmody, definitely promoted a $1000 challenge in 1898/1899 and 1902, but with no mention of five clubs.

Finally, in that letter, Joe Donald wrote about 1903:

Bennie Mowatt had just turned 16 and could play New York, so he came to join the Johnsons. …. When the act opened at Hammerstein’s he was with it. This was the season of 1903-’04. The Johnsons had three men in the act who could juggle five clubs, Pat and Henry, who, by the way, were twins, and Bennie Mowatt. And up to that period that was no other juggler on record who do five clubs.

There is implicit corroboration of Pat McBann juggling five in 1903, in this advert by the Juggling Johnsons in The New York Clipper, March 14, 1903:

This season we have the only man in the world Juggling Five Clubs. Next season, the only BOY doing the same.

We know the claim above of no other man juggling five clubs is wrong as Hanvarr had been juggling five in performance for two years by 1903. Also, in 1903, a forthcoming show by Darmody was promoted with, His juggling of five indian clubs at a time has never been equalled by any other performer. (Fort Wayne Journal-Gazette, July 19, 1903). While I have found no corroboration, given his history of $1,000 challenges he may have been doing five in 1903 and earlier. 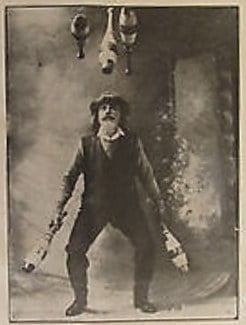 It is quite possible that Darmody was performing 5 clubs at least as early as 1900, as Van Wyck’s publication America and Europe’s Greatest Jugglers was published that year and contains the following photo showing Darmody juggling four clubs with a fifth behind him. 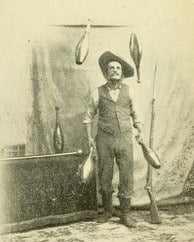 The boy mentioned in the Juggling Johnson’s is almost certainly 16 year old Ben Mowatt, who was also the subject of an illustrated article ‘Club Juggling’ by Harold Shepstone in The Royal Magazine vol 9, 1903 which said, Young Mowatt can handle five clubs alone at the same time.

Following the split of the Juggling Johnson’s this advert appeared in 1904:

The five-club juggling emphasis in adverts around 1903 seems curious if it had been part of the acts for several years already.

In his 1946 article Tommy Breen wrote, “The first to juggle five clubs was Ben Mowatt. He is the son of the man I mentioned before as having created the three and four club routines for troupes. I thought for quite a while that Pat McBann was the first with five, but a few of the old timers that knew both the boys corrected me on that and said Ben handled the five before John Whitfield put his nephew, Pat, in the Five Johnson’s act.” (Juggler’s Bulletin Number 20, May 1946 https://www.juggling.org/jb/jb20.html).

The Johnson’s act, featuring Pat, was formed in 1898 when Bennie would have been turning eleven years old and I am deeply sceptical that a boy this young would be the first to juggle five wooden clubs. I found no contemporary press corroboration, but a December 1899 newspaper account, when Ben Jr. was twelve, says,

Ben Mowatt Jr. gave a fine exhibition of club swinging, juggling as many as four clubs at a time. A shower of silver coins rewarded the youngster. (Chicago Tribune, Dec 12, 1899, p4)

Incidentally, Ben and his father are reported as passing six clubs around then:

Ben Mowatt and son are clever club jugglers, and the son, a little less than 10 years old, is a marvel. He juggles six clubs in exchange with his father, and no prettier act of the sort was ever seen. (Detroit Free Press, May 2, 1899, p10)

As it stands, the first person proven to juggle five clubs – and in performance – is Will Hanvarr from April 1901, with Pat McBann, Ben Mowatt, and James Darmody cited in the press from 1903.

It is entirely possible that one or more of these six early five-club jugglers were juggling them earlier than 1900 and that corroborating reports will be found.

You can contribute to the eZine, too! Just email us at the link in the Contact Us section at the top of the page...