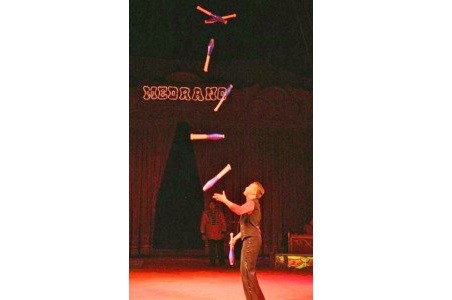 I must admit that until early 2015, I was not familiar with Willy Colombaioni, even though he’s been a professional juggler for a number of years. Like many readers, it wasn’t until he started posting videos of several new juggling records that I took proper notice. 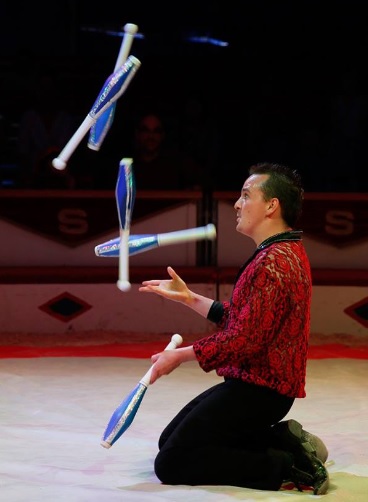 Willy’s accomplishments gained him a large amount of fame in the juggling world in the last year, as has his excitable personality. However, he gained a good deal of criticism as well, at least at first. Some of the videos he posted at the beginning cut off immediately following the last catch, or were cropped right below the hands. As a result, some people questioned the authenticity of the records and whether the final catches were maintained. However, Willy put any questions regarding his ability to rest for good with subsequent videos (many from multiple angles) that demonstrated these outstanding accomplishments and more. Colombaioni made Luke Burrage’s list of Top 40 jugglers for the first time for 2015, and many jugglers are excited to see what the future holds for this performer.

Among the records that Willy has accomplished are:

– 9 club flash (one of only 3 jugglers to do this) (NOTE: See Willy’s comment on this trick in his interview for an interesting statement)

Video of some of Willy’s Records and Accomplishments

However, Willy isn’t only a technical juggler who posts videos of amazing feats. He’s also an accomplished performer. Primarily working in circuses, he’s presents a technically challenging act combined with a solid presentation and personality. The act includes several very difficult tricks and a five-club routine which is one of the best in the business currently.

Even though we had to deal with translations of the questions from English to Italian and the answers from Italian to English, I posed some questions to Willy recently in order to get to know more from this performer.

eJuggle: Tell us about yourself.

Willy Colombaioni: I was born on December 14, 1985, in the Chiaravalle, a town in the Province of Ancona in the Italian region Marche. My wife’s name is Sharon, and we have 2 children – Pearl and Lionel.

eJ: How did you become a juggler?

WC: I became a juggler thanks to my grandfather, Willy Colombaioni, Sr. He was a juggler and gave me a love for this culture and art.

eJ: Who are your juggling heroes?

WC: My heroes are Alberto Sforzi, who to me is the best Italian juggler ever, and of course, Anthony Gatto.

eJ: 2015 saw your fame as a juggler really take off thanks in large part due to the videos you posted demonstrating a number of records. What accomplishment or accomplishments are you most proud of as a juggler?

WC: The record that makes me most proud is to 8 clubs for 16 catches, because I share the record with my idol Anthony Gatto. Also, I believe that I was the first to flash 9 clubs – I did it in 2002 at age 17. I didn’t know it was a record at the time though.

eJ: Tell us about your career as a performing juggler. What is your act like and where do you perform?

WC: In my performance in the show, I include a 10 ring flash, around 30 catch of 7 clubs, and conclude with a 2 minute routine with 5 clubs. I perform in the Circus Medrano (Casartelli), performing in Italy for the first part of 2016, then in Poland for most of the rest of the year.

eJ: You have tied the world record for eight clubs with 16 catches. Do you have plans to try to surpass 16 catches with 8, or to try to qualify with 18 catches of 9 clubs?

WC: I think I can exceed 16 catches with 8 clubs, but I will not because I’m happy to see my name alongside Anthony Gatto with the record. For the 9 clubs, I do not think it’s possible to make a qualified run of that many. But, I would like to make a flash of 10 clubs, I am already able to catch 8 out of 10 clubs.

eJ: You qualified 10 rings and got 14 catches of 12 rings. Do you have plans to try to become the first person to qualify more than 10 rings, or to match the record by Albert Lucas of flashing 13 rings?

WC: I’d like to tie the record of 11 rings with Anthony (17 catches), and then one day I’d like to try 13 rings, but not now because I have many work commitments. But I’d like to see the video of the 13 rings by Albert Lucas. 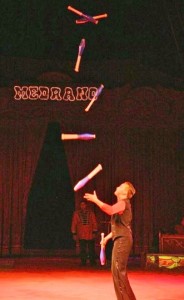