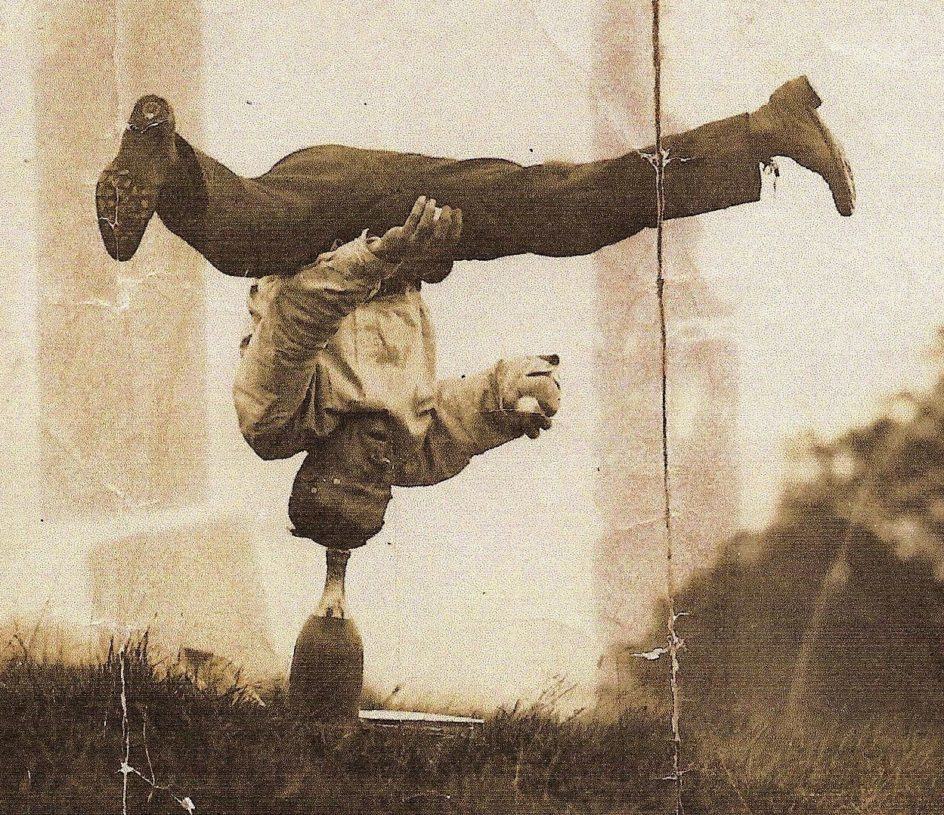 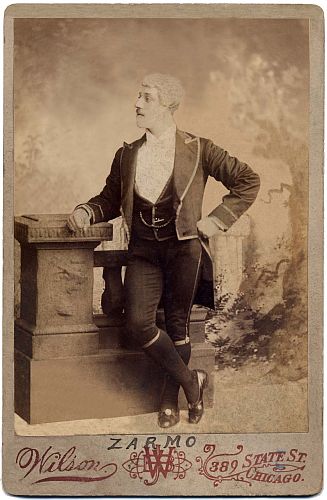 Zarmo was born Joseph Henry Stephens in 1868 in Cheriton near Folkstone in Kent (UK). His father was a horse trainer and the owner of a traveling road show. Zarmo learned juggling from the Japanese jugglers who were employed by his father. 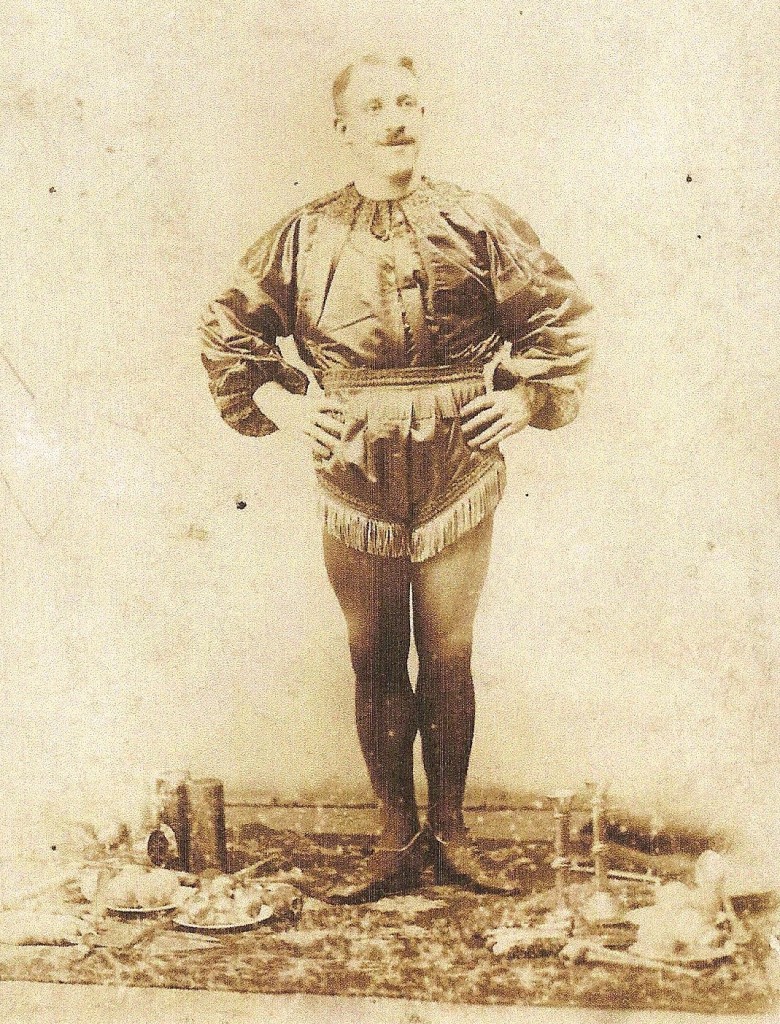 It is believed that Zarmo began his career in 1884, when he was 16 years old. It is known that he performed at the Canterbury Theatre on October 4th, 1884. For the next nine years he performed throughout Great Britain, honing his abilities. In 1893, he toured the United States, performing in New York City, Detroit, and Chicago, among other stops. The New York Clipper newspaper ran a review on Saturday, April 1st, 1893 that read, “Zarmo, a clever and noted juggler, closed with M.B. Leavitt’s “Spider and Fly” Co. March 8th in the Northwest and has returned to town. Zarmo is an exceptionally skillful equilibrist performing very difficult feats in jugglery while balancing himself head downwards on the top of a champagne bottle. He is an industrious worker and is whiling away his odd moments in practising a new act on the sensational order.” Zarmo sailed back to Great Britain in November of 1893. The following year he was described in the press as “Zarmo, the inverted juggler.” Zarmo is the earliest inverted juggler of whom I’m aware. Below is the only known photo of Zarmo juggling while doing his most famous trick of balancing upside down on a champagne bottle. He has one ball in each hand and a third is difficult to see, but it’s located at the inside of his right knee and blends in with his pants and the back ground.

In 1894, Zarmo performed alongside a five year old Charlie Chaplin. The juggler made a lasting impression on the young Chaplin, as Zarmo is discussed in Chaplin’s autobiography. Chaplin wrote the following about Zarmo. 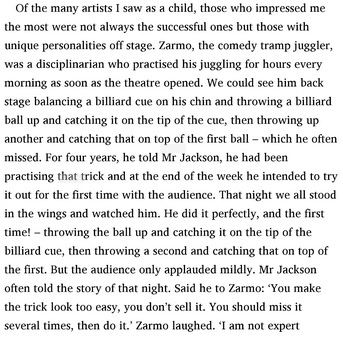 Zarmo performed throughout Great Britain in 1895 and 1896, where reviewers wrote that “Zarmo, with his juggling feats, gives perhaps the most popular turn this week” and “One of the most entertaining of the many good turns at Mr. Herbert Sprakes’ well patronized hall is Zarmo, the clever ‘upside down’ juggler. Zarmo is very funny and his manipulation of all sorts of odd looking things is always well done.” 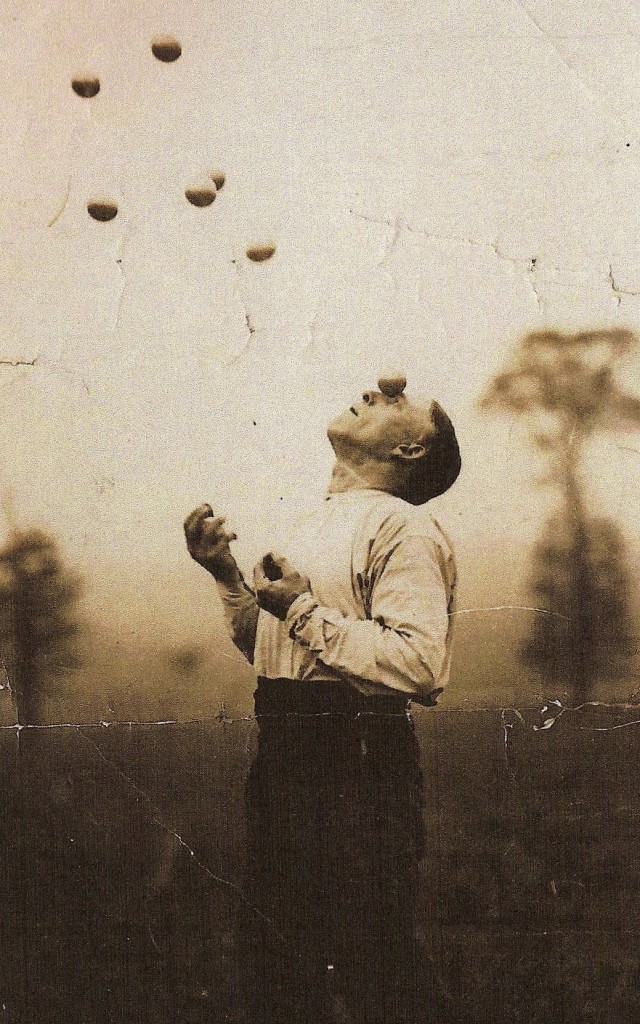 In 1897, he married Rose Jamieson, with whom he had six children. That same year, he traveled to South Africa to perform before returning to England. Zarmo spent the next 15 years performing steadily, mostly in Great Britain. His reviews were always positive, with great emphasis being put on his uniqueness, cleverness, and humor.

Descriptions of his act reveal that he was an extremely skillful juggler. In addition to the billiard trick that Chaplin described and the upside down trick, we know from various sources that he performed the following:

The magnetic pole and balls

5 balls while balancing something on his head

Penny running on a plate

Zarmo was so confident in his skill level that he advertised that he would pay 1000 British Pounds to any juggler who could match his tricks. 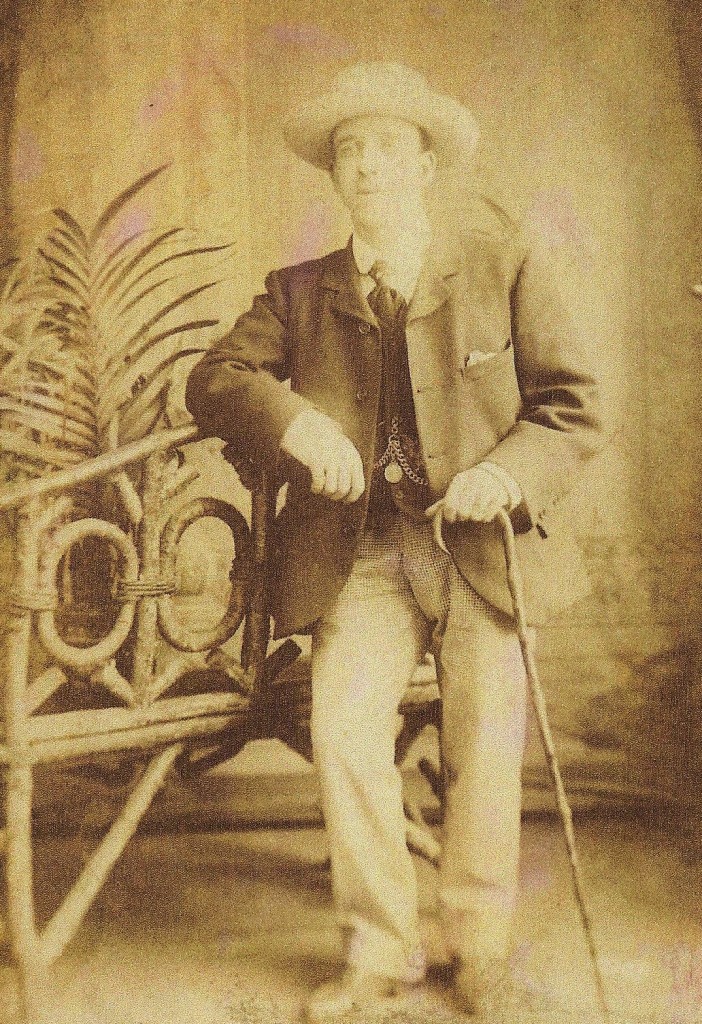 We can see from the following photos, that he often dressed as a woman, baby, tramp, or other characters for comedic effect. 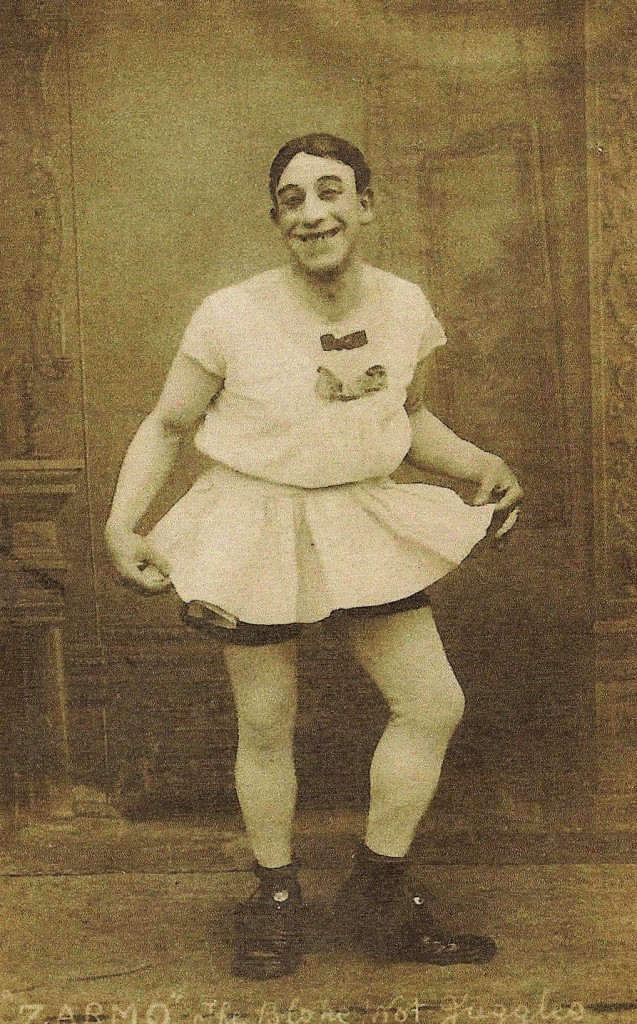 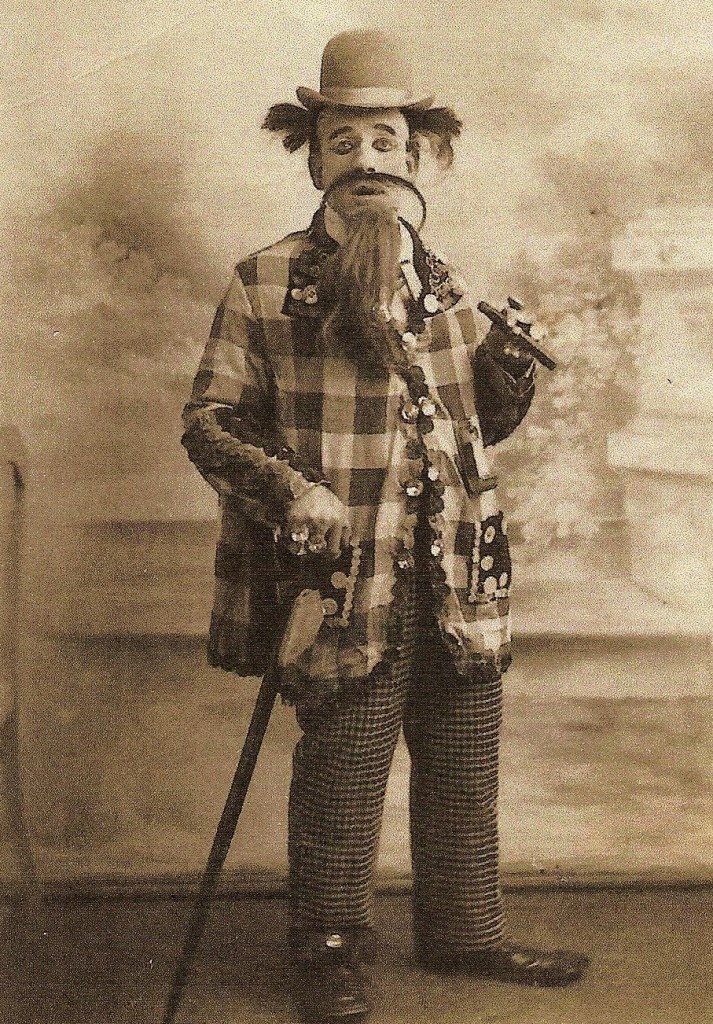 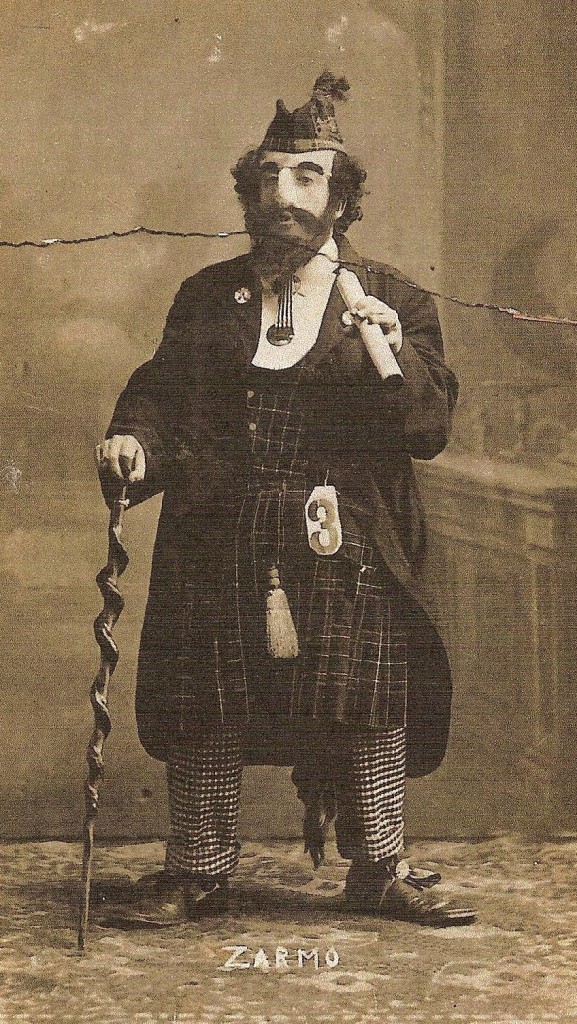 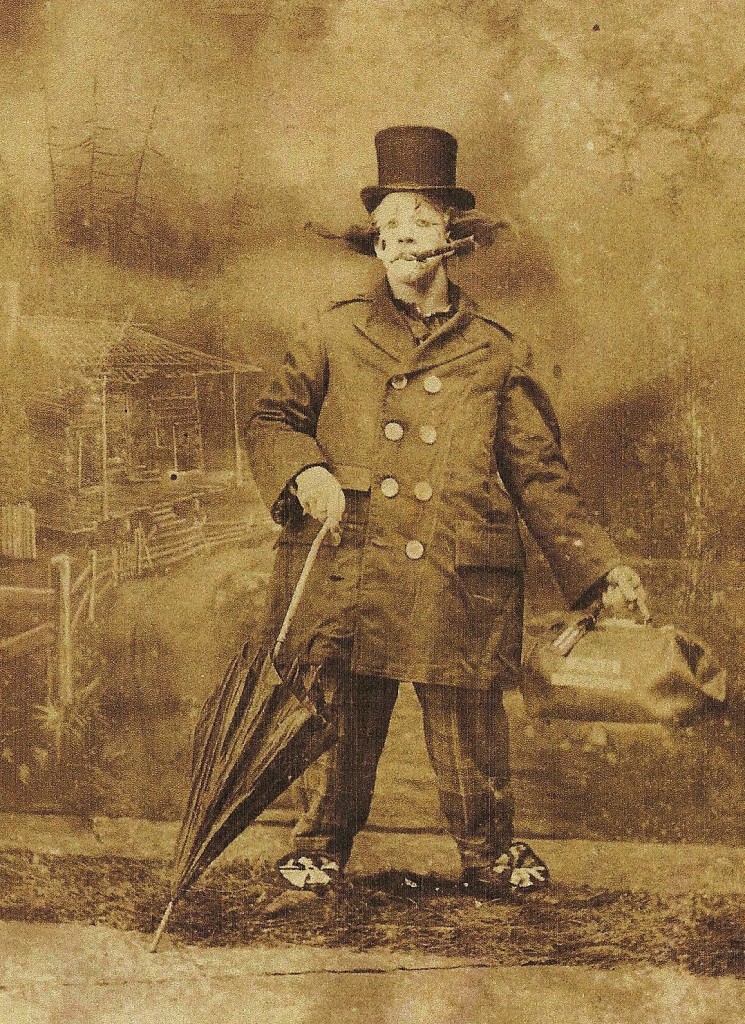 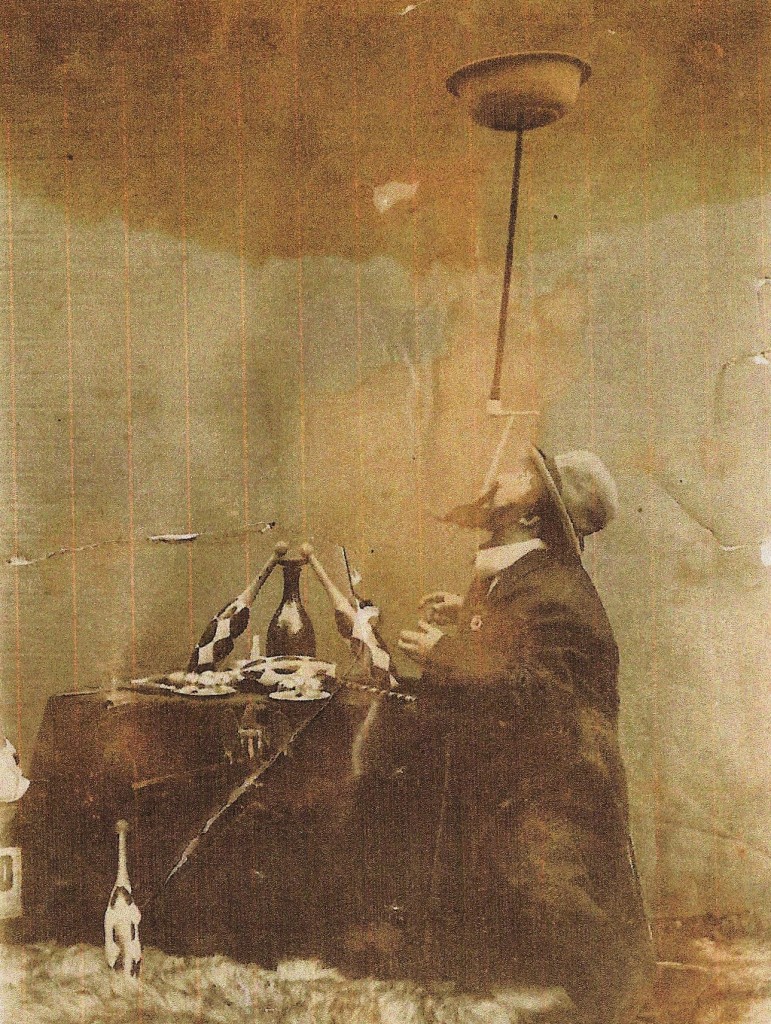 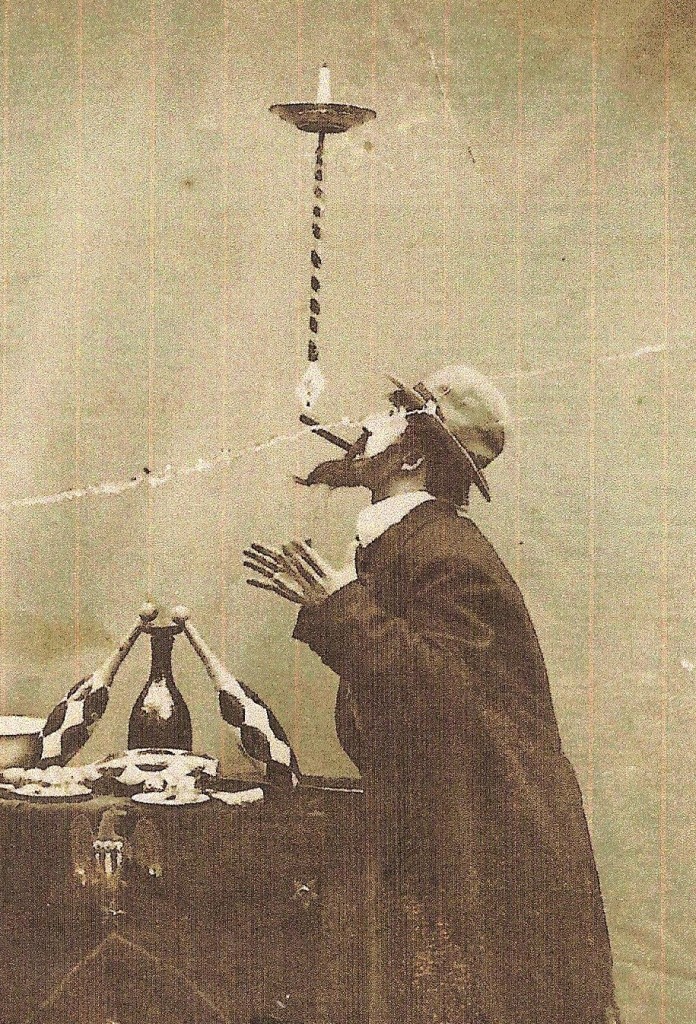 As you can see in the two previous photos, Zarmo often dressed in stereotypical Hebrew garb and performed under the title of “Zarmo, the Hebrew comic juggler.” Other titles he performed under include:

Zarmo, the Only Real Funny Juggler

Zarmo, the only upside down juggler

Zarmo, the only burlesque juggler

Zarmo, the clever upside down juggler

Zarmo, the clever and diverting juggler

Zarmo, a juggler of no mean ability

The Best Known Juggler On Earth

The Wonder Of The Age

Zarmo, King of all jugglers

Zarmo, The Alpha and Omega in Juggling

Zarmo, The Cleverest, Funniest, Most Versatile and Original Juggler on Earth

Zarmo boasted that he practiced 7 or 8 hours a day. When he was between bookings, he promoted himself in newspaper advertisements, usually using rhymes to proclaim his greatness. Below is one of the shorter such rhymes.

Zarmo’s a juggler – best ever seen,

All over the world Zarmo has been

Dances, tumbles, tricks are so neat,

Does more on his head than some on their feet.

Real comic toff wherever he goes

Laugh at his tricks, scream at his clothes.

Where once engaged, always goes twice. 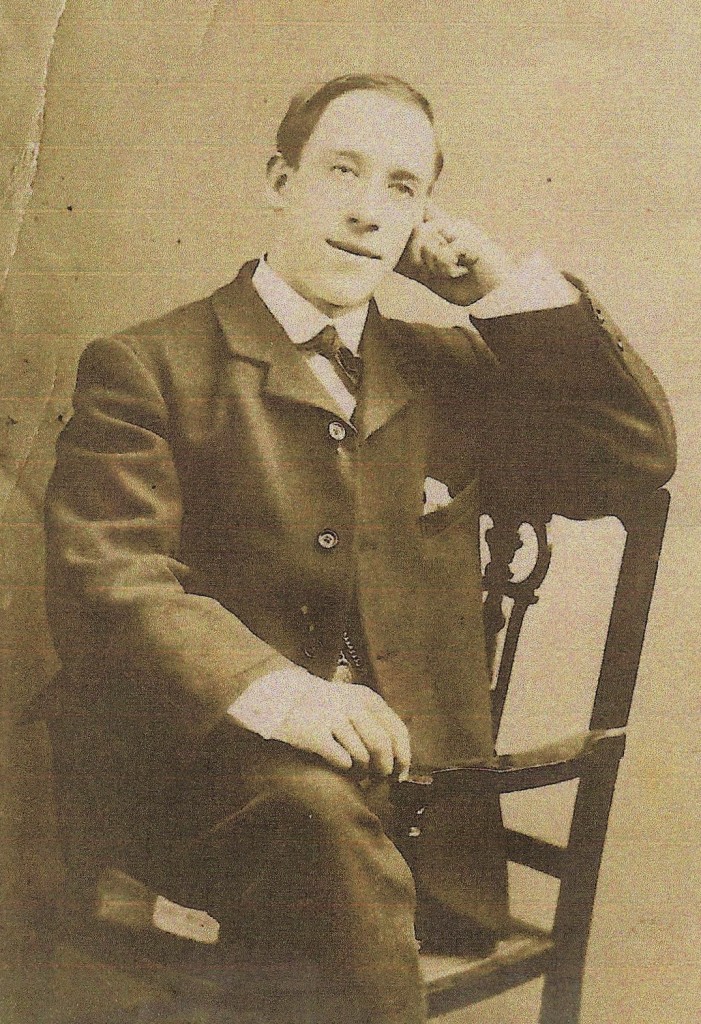 In 1913, Zarmo opened his own “Unique Vaudeville Bureau,” booking other acts on vaudeville and music hall circuits. At the same time he continued his own performing career, sometimes performing with a partner / assistant named Claude. Zarmo appears to have retired in 1926, but did perform once more in 1935 at the age of 67. This was in a “Cavalcade of Variety” show at the London Palladium which featured acts from the past that had been popular on the music hall stages 25 years earlier. 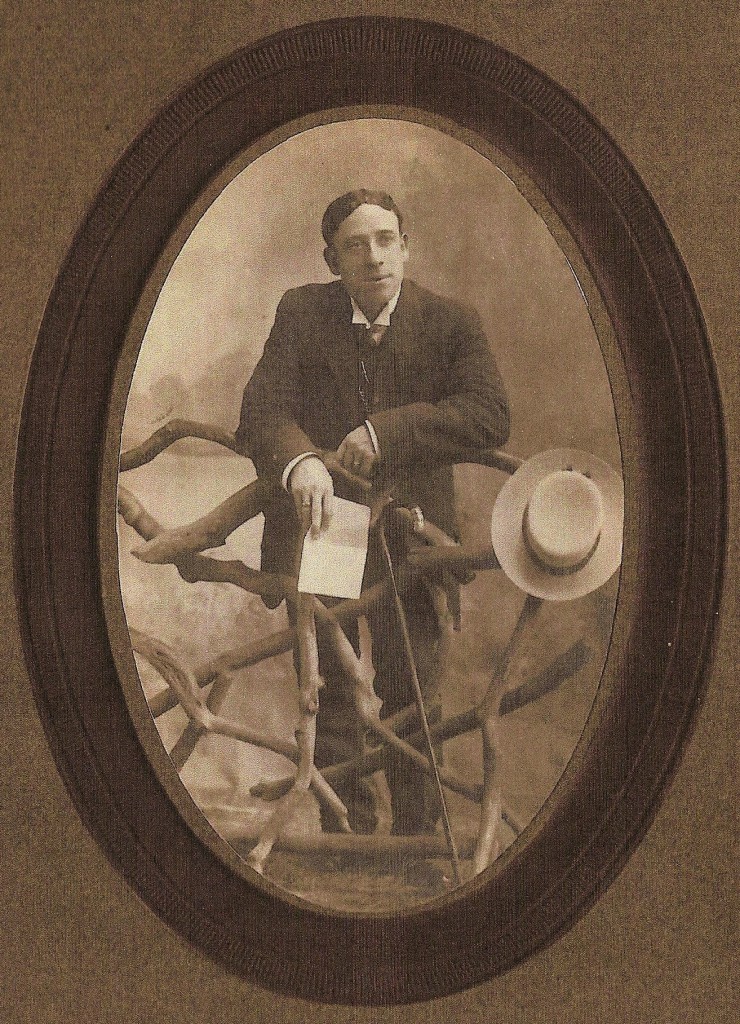 In 1936, a juggler arrived in the United States who billed himself as Kombo – Zarmo, Jr.. A brief description of his act appears to mimic Zarmo’s, including a comedy act that Zarmo was famous for called, “A Baby and His Horse.” It is not known who this was and no other information has been found about Kombo. Below is a photo of Zarmo from his “Baby and His Horse” routine. 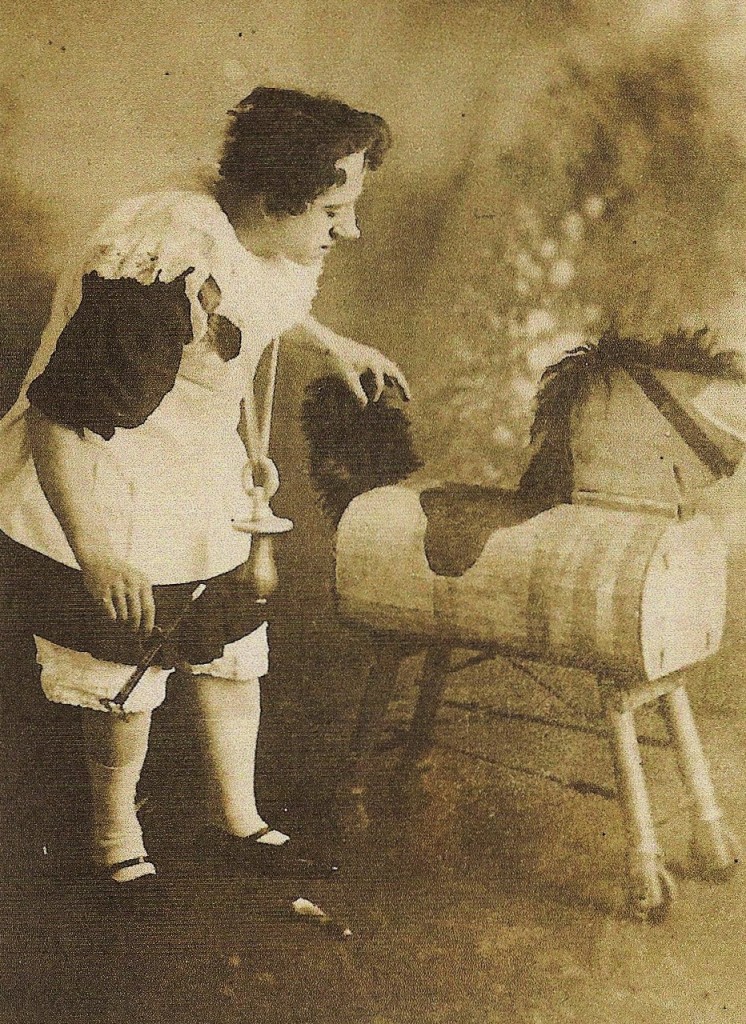 Zarmo passed away in London on January 27th, 1943. It is unknown why Zarmo has not been discussed in previous research into juggling history. However, his descendants have kept his memory alive. His granddaughter Tish Sanders has provided me with the vast majority of the information and photos for this article. She sent me several packages of newspaper clippings, contracts, photos, and other information. His family also still has some of Zarmo’s props, which you can see below. 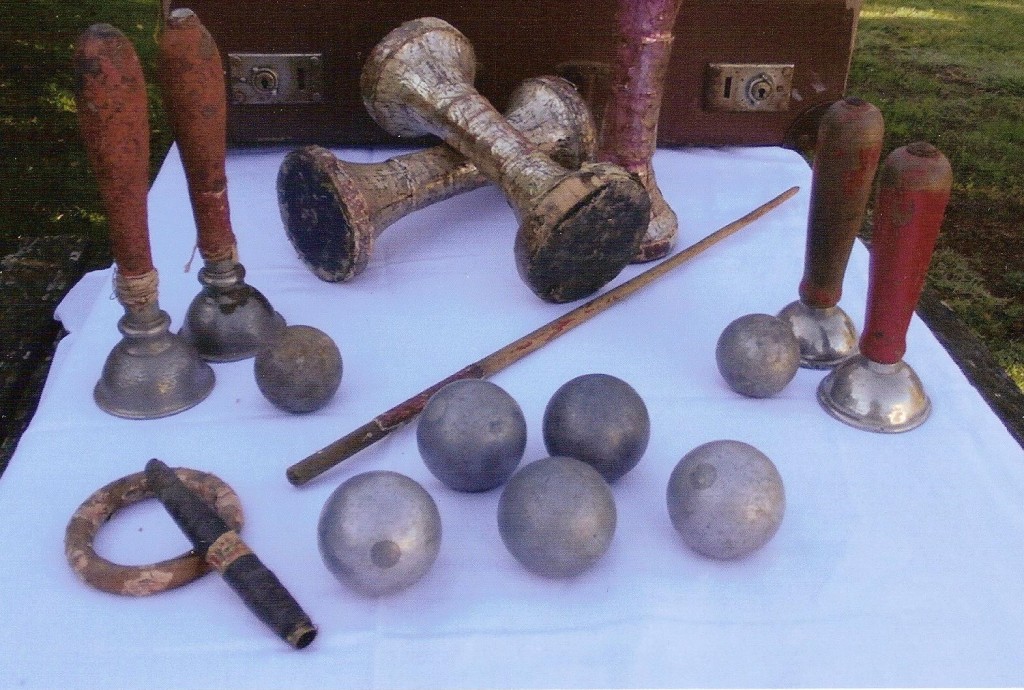 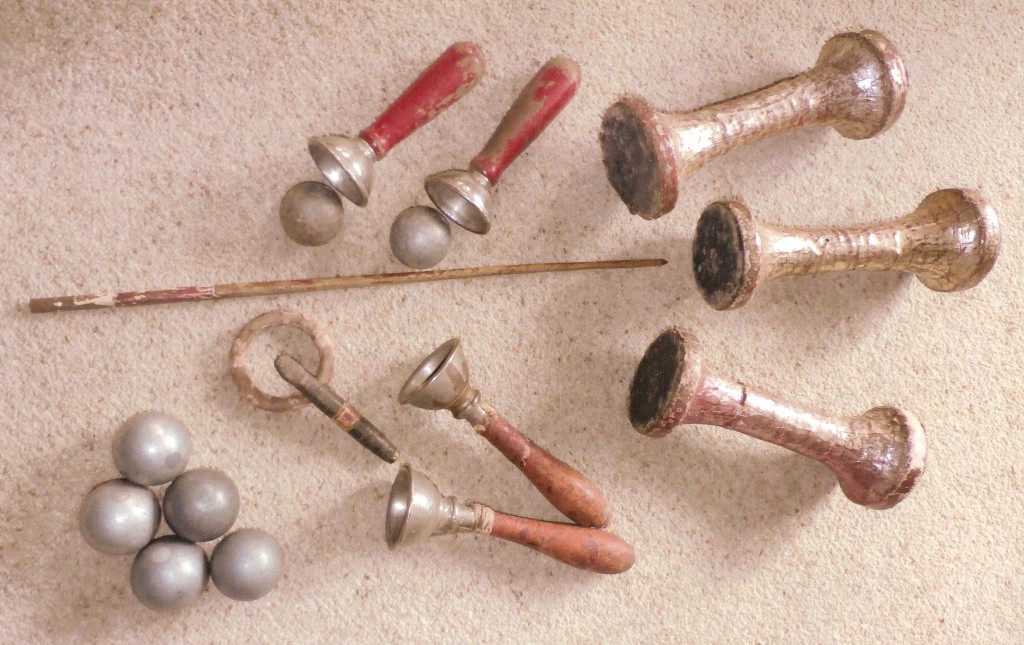